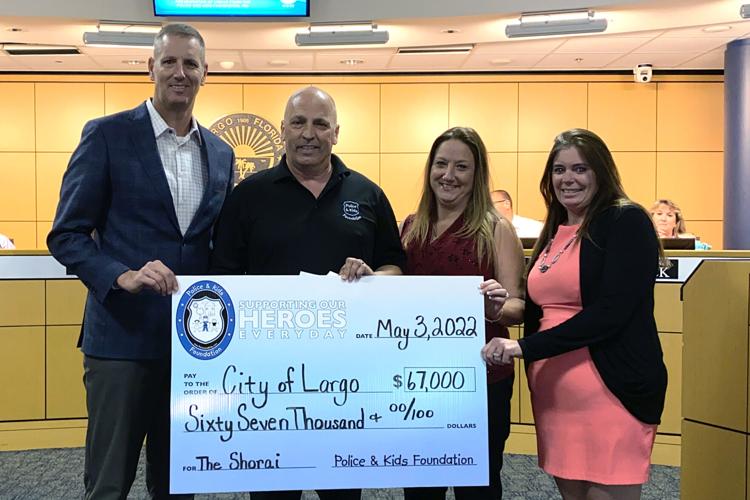 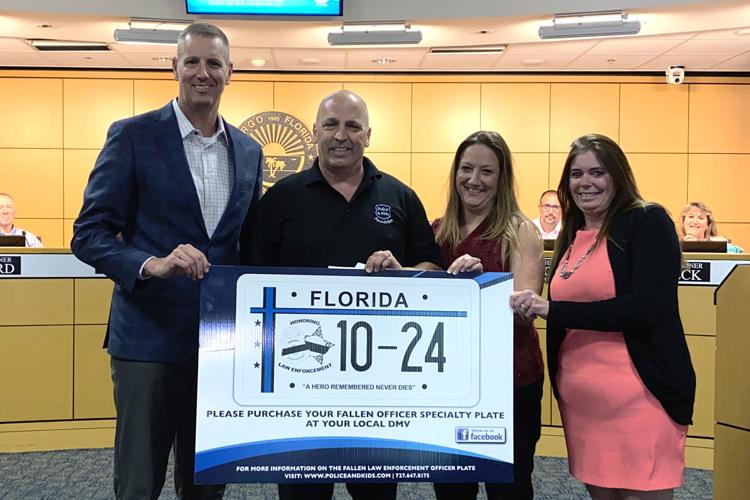 LARGO — It’s likely the dream of most police officers to ride in and save the day for a group of kids. Tracey Schofield hasn’t been a law enforcement officer for about 10 years, but he still found a way to play the hero recently by supplying the funds needed to construct a new teen area at Largo Central Park.

On May 3, Schofield, who is both the president of the Police and Kids Foundation and the city’s Community Standards manager, presented the city with the $67,000 needed to bring the new teen area to fruition.

Schofield said the foundation has come a long way since he and his wife created the nonprofit about a decade ago.

“This has been a really big day for us,” he said. “Today alone we spent over $100,000 helping the community. This is the biggest check we’ve ever written, which is encouraging.”

Earlier in the day, he said the nonprofit — which aims to build positive relationships with law enforcement by helping youths — wrote a check for $35,600 to Girls Inc., a nonprofit in Pinellas Park, for a new roof for its building.

He added that the foundation also has a far reach, citing bicycles it bought for the Green Cove Springs Police Department in the Jacksonville area.

The foundation also recently purchased a new police dog for the Pinellas Park Police Department at a cost of $10,000.

“When the commission and the community was struggling to find a solution, you kind of came in with a fresh set of eyes and said, ‘I think we can fix this by working together,’” he said.

The problem was a concern from parents who said some teenagers were using playgrounds designed for younger children and causing safety concerns.

The concerns led to a proposed ordinance that stated that no one older than 12 would be allowed in designated child play areas unless he or she was looking after a child.

Commissioners Eric Gerard and Jamie Robinson had concerns about law enforcement’s involvement and the negative effect it could have on teens.

Ultimately, the commission voted against the new regulation, but urged staff to move forward on Gerard’s suggestion to create a teen area at Central Park.

Designing and equipping such an area isn’t cheap, though, which is when Schofield stepped up, pledging $50,000.

Robinson, who is liaison to Largo Youth Leadership Council that has helped design the teen area, said Schofield has been involved in the entire process.

“When things ran over a little bit, it was initiated by you to come and say, ‘Hey, I’ve got some more money we can donate.’ For the kids here in the city of Largo, I can’t tell you how much we appreciate that,” he said.

Krista Pincince, Recreation, Parks and Arts director, told Tampa Bay Newspapers the $80,000 project is in the review stages. Installation should begin in the next few months with a goal of opening this summer, she said.

She said the Teen Gathering Area in the southwest corner of the park will include unique seating options, including a 13-foot-long bench, two swinging benches, and active games like tetherball and cornhole.

Schofield likely won’t be a city employee when it’s completed though.

After 33 years of service to the citizens of Pinellas Park, Largo, Brooksville and the children of Pinellas County Schools, the code enforcement manager is stepping down from his post on June 17 so he can focus all his attention on the foundation.

Most of the nonprofit’s funding comes through the sale of its "Fallen Law Enforcement Officer" specialty license plate, so Schofield told Tampa Bay Newspapers that he aims to spread the word about the foundation’s efforts.

“I believe we are known locally, but we want to expand our support statewide,” he said. “This will require a lot of travel, and events. We are a very small charity with big dreams and big goals that will take up much of my time and commitment. I am blessed to have tremendous support from my family and friends, and I'm very excited for what the future holds for us.”

Robinson said he’ll definitely be missed by the city.

“I just wanted to say how much I appreciate everything you’ve done for the city of Largo,” he said. “The department you manage is night and day different under your leadership.”

Some of those efforts have included code enforcement initiatives to crack down on blight and unlicensed contractors, but also proactive approaches to helping the homeless and those with mental health issues.

“We have done so many great things and come a long way to better serve our citizens and businesses,” Schofield said. “The job of a code enforcement officer is very difficult, stressful and dangerous. However, if done right I believe being a public servant can also be such a rewarding profession and I have been so blessed over these years to have served so many people. There is much still to do, but I hope that I have been able to leave the city in a better place.”

About: The foundation is a 501(c)(3) charity that helps children in need or assists with the needs of police departments.

How to help: Contact Tracey Schofield by calling 727-647-0175, emailing tschofield126@gmail.com, or visiting the website at www.policeandkids.com. Checks can be made out to “Police and Kids Foundation”.