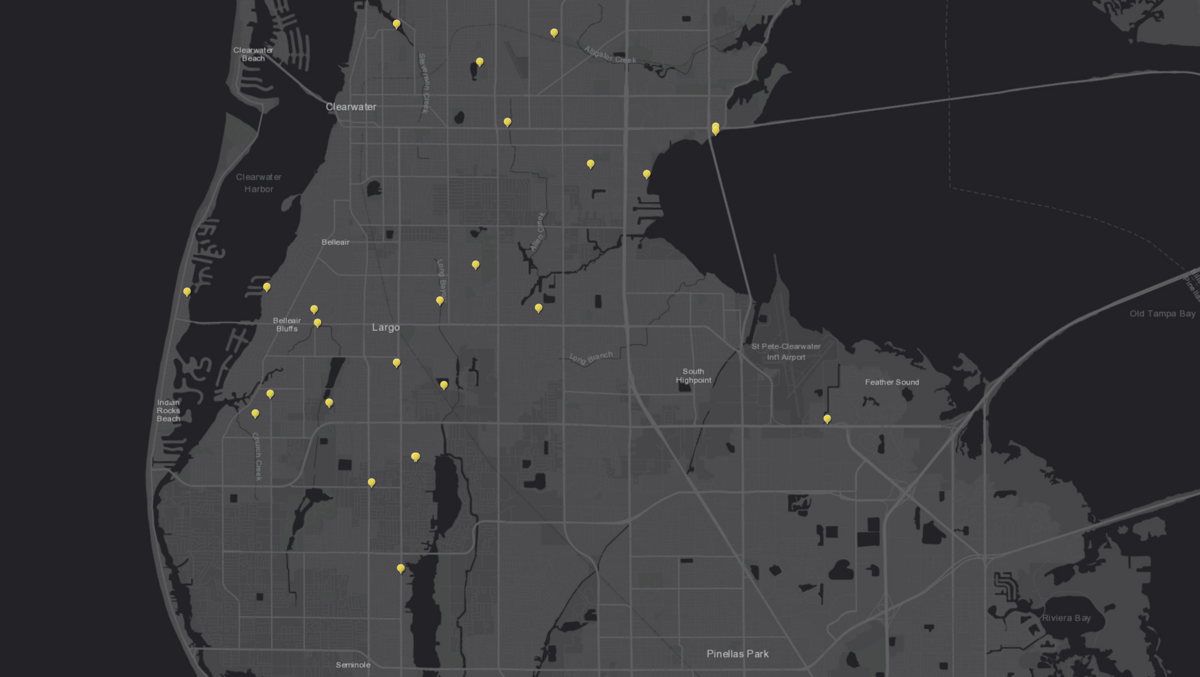 The yellow dots on this map provided by the Florida Department of Environmental Protection show where wastewater overflows occurred in the past month in central Pinellas County. Largo had 829,000 gallons of overflow from seven sites. 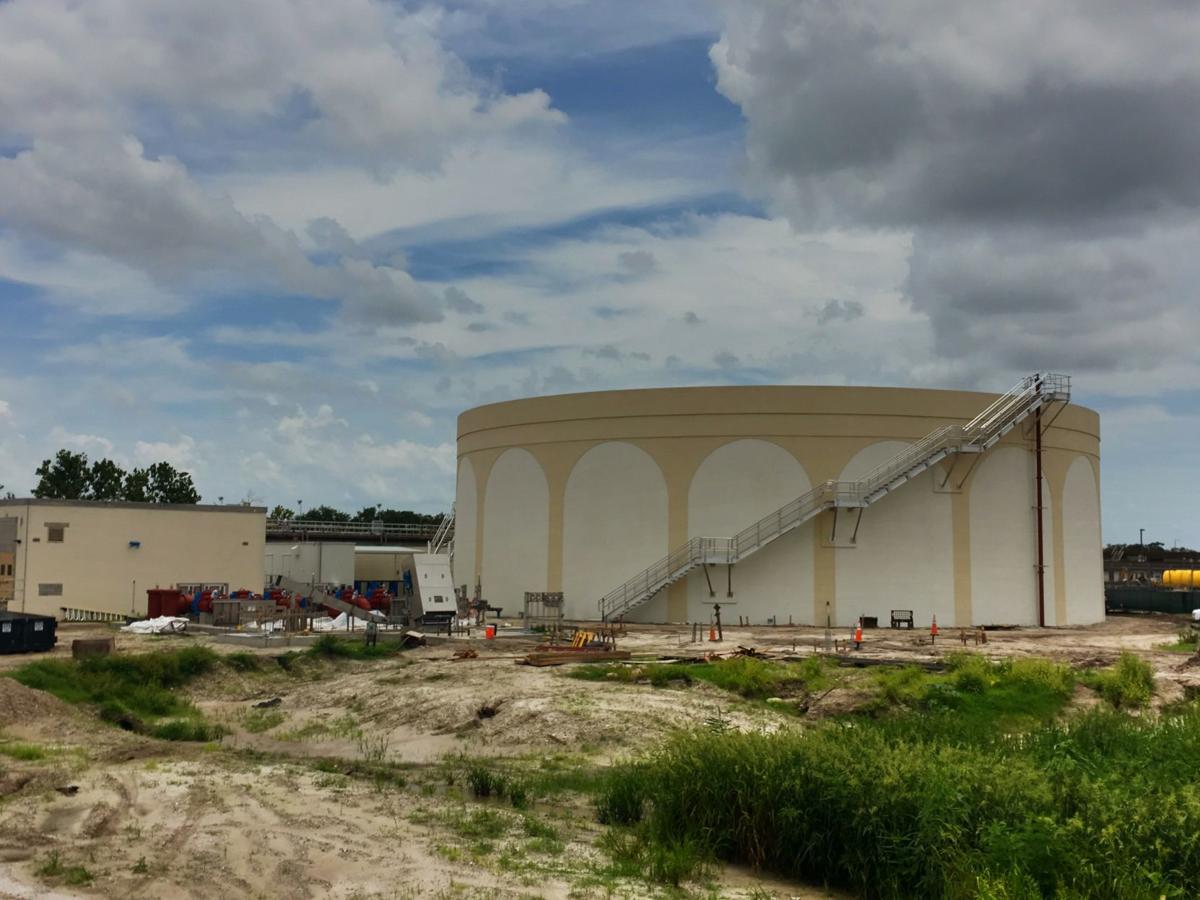 The $25 million headworks project, which includes a 5 million-gallon holding tank, was put to use recently during a series of storms the pushed the city’s wastewater system to, and in some cases, past its limits.

LARGO — In the past decade, the city of Largo has spent more than $80 million on upgrades to its stormwater and wastewater systems in an effort to cut down on sewage overflows. For the most part, the efforts have paid off, significantly reducing the overflows that had plagued the city.

This summer, however, has been a wet one for the Tampa Bay area. The peak came Aug. 12-17, when some parts of Largo received a total rainfall of 10.1 inches. That extended downpour led to 829,215 gallons of raw sewage overflowing from seven manholes scattered around the city, Environmental Services Director Irvin Kety said Aug. 26.

“There wasn’t like one day of a lot of rain,” he said. “It was multiple days in a row. So it just tends to overwhelm the capacity of the system eventually.”

Some of those overflows, which could result in fines from the Florida Department of Environmental Protection, likely infiltrated McKay Creek, Allen’s Creek, the Seminole Bypass Canal and the Intracoastal Waterway, according to a city report.

It could’ve been much worse, Kety said, if not for the series of projects that began to come online two years ago, including the $44.2 million Wet Weather force main system that is meant to get water and sewage to the treatment plant faster.

However, according to the report, Environmental Services staff detected multiple inconsistencies with the system’s performance and feared that multiple overflows would occur, leading them to request the design engineer come to the facility and monitor the system.

After several hours of assessing data, Todd Bosso of Brown & Caldwell Engineering determined that the system was being pushed past the limits of its design, but it was still helping reduce sanitary sewer overflows.

“The collection system personnel were able to operate the new Wet Weather force main system to the designed maximum pumping capacity and at times just above that maximum amount, which helped minimize upstream SSOs,” Kety wrote in an email to Tampa Bay Newspapers.

Not all personnel performed their job successfully, though.

The report states one of the discharges, 33,000 gallons from a manhole on Donegan Road near Highland Avenue Southeast, was caused by operator error, when an employee mistakenly attempted to release excess pressure from the force main by throttling a valve.

Once notified of the discharge, “staff immediately returned the valve back to its normal operating position and the SSO stopped.”

Kety said other discharges were caused by a number of reasons that the city plans to remedy in the near future, including infiltration problems and bottlenecks in the pipes.

“We have projects that we’re actually doing this year that address some of those,” he said.

There’s not enough money or contractors to fix all the problems at once, however, so Kety said evaluations and repairs are an ongoing process.

“Every year, it (the sewage system) gets older, so that means it never all goes away,” he said.

The good news, Kety said, is that the wastewater treatment plant itself did not have an overflow, which is a result of multiple upgrades and a departure from years past when the plant had to discharge millions of gallons of treated wastewater into nearby waterways.

What’s even more impressive, he added, is that the plant is in the midst of a $53.5 million project to improve the facility’s biological treatment systems.

“One of the plants is fully offline because we are doing a major upgrade of the whole facility. So for the next year to year-and-a-half, we are going to have one plant offline at a time. So that means that about a third of our capacity of the facility is down.”

At one point, the flow was coming in at a rate of 29 million gallons for an entire 24-hour period, which he said tested the limits of the plant and personnel. He said that’s when the recent addition of a 5-million-gallon holding tank made a big difference.

“Without the 5-million-gallon tank and having one plant down, it probably would’ve overflowed, for sure,” he said. “My staff feels, and I think they’re right, that if we had three plants operating, we would’ve been just fine.”

Because of previous overflows, the city entered into a consent order with the FDEP in 2006 to reduce the amount of sewage it was discharging into local waterways and to cut down on the number of sanitary sewer overflows.

Kety doesn’t know yet if or how much the city will be fined for the recent discharges, but he said state officials take several factors into consideration, including the amount of rainfall and efforts the city is taking.

“They’re realistic and they know that these things are going to happen under these heavy rain conditions,” he said.

From Aug. 12-17, the city reported overflows at seven locations:

• At the intersection of Gladys Street and Hillsdale Avenue, a manhole discharged 125,140 gallons of raw sewage over two days.

• In the vicinity of 1931 W. Bay Drive and 20th Street Southwest, a manhole discharged 187,000 gallons of raw sewage into McKay Creek.

• A manhole on Fifth Avenue Northeast near the Largo Police Department discharged 162,000 gallons of raw wastewater over a two-day period into a creek that leads to Long Bayou and the Seminole Bypass Canal.

• A manhole at 1700 Harmony Drive discharged 138,950 gallons of wastewater to a stormwater system that leads to Allen’s Creek.

• A manhole on Donegan Road, near Highland Avenue Southeast, discharged 33,000 gallons of raw wastewater into a ditch that leads to the Seminole Bypass Canal.