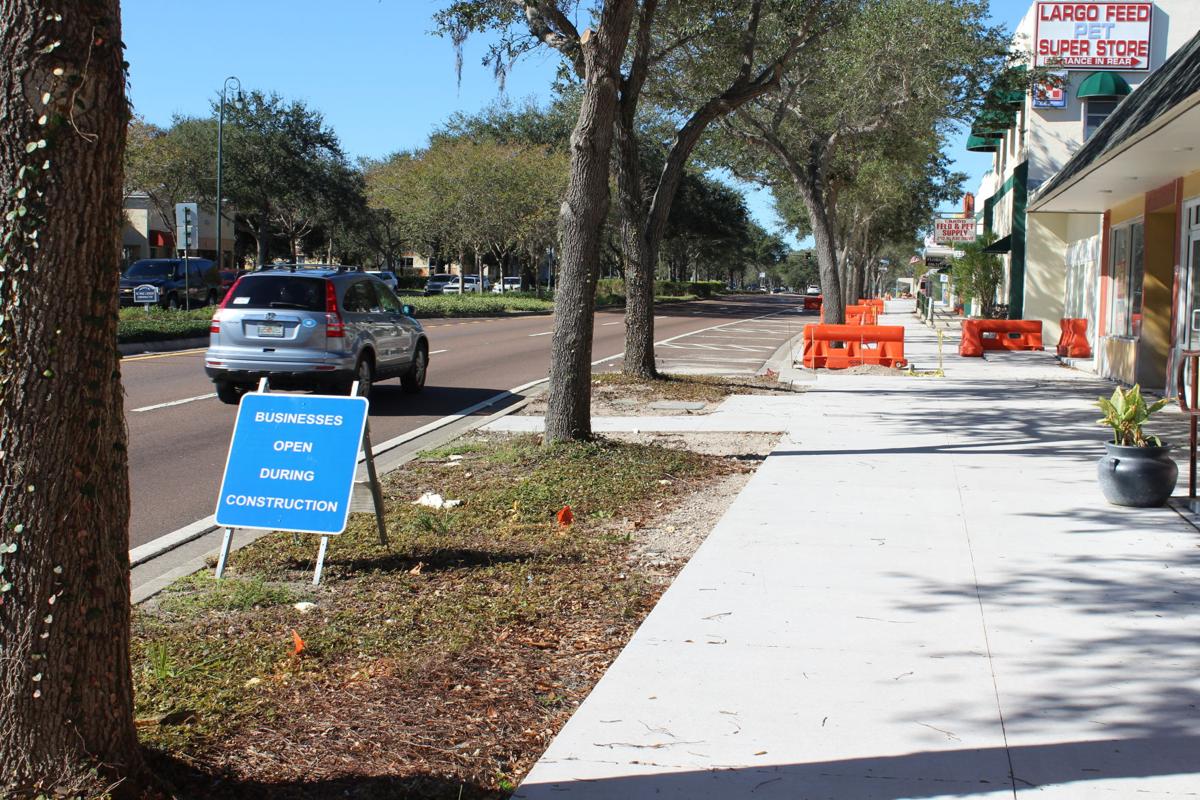 New sidewalks are part of a $3.51 million project to repair and improve the downtown section of West Bay Drive from Missouri Avenue to Clearwater-Largo Road. Starting Jan. 13, crews will begin repairing the sidewalks on the south side of the road, which will lead to a lane closure. 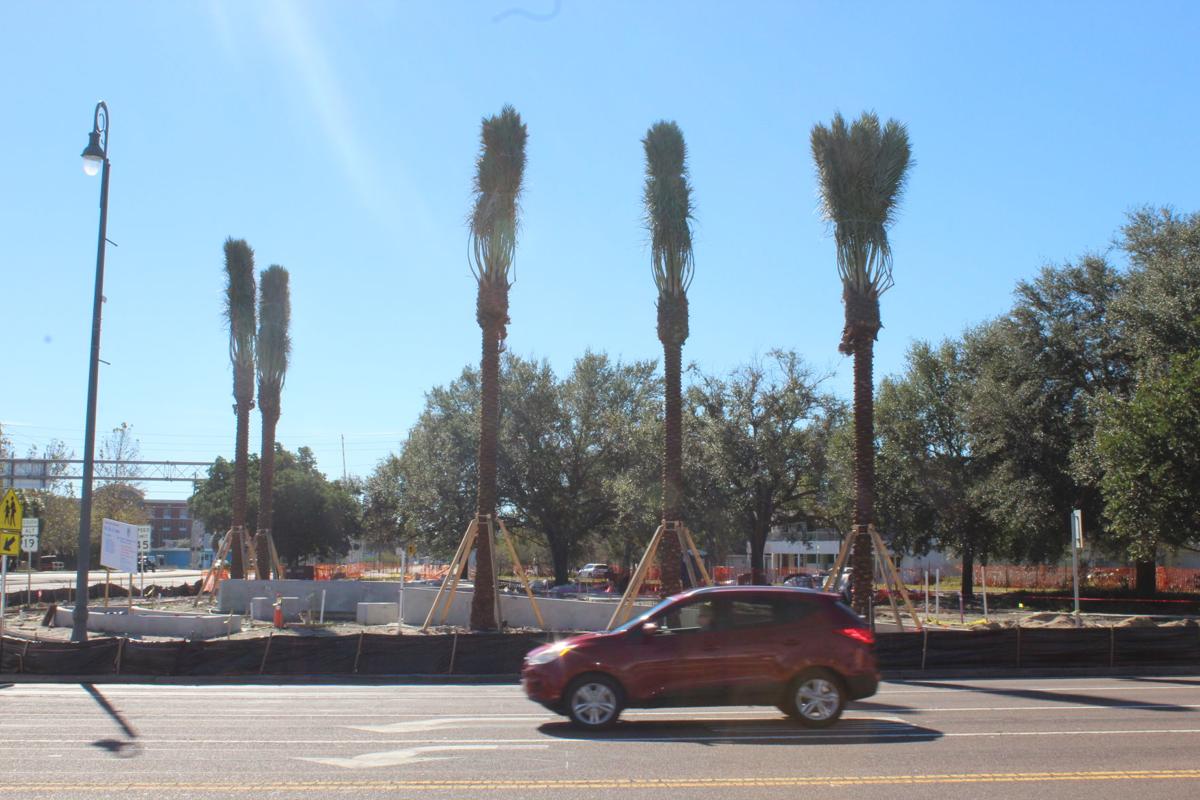 Medjool date palms tower over what will be a new downtown plaza at the southwest corner of Seminole Boulevard and West Bay Drive. Work on the hardscaping, such as the sidewalk, is underway, and the project is expected to wrap up in February. 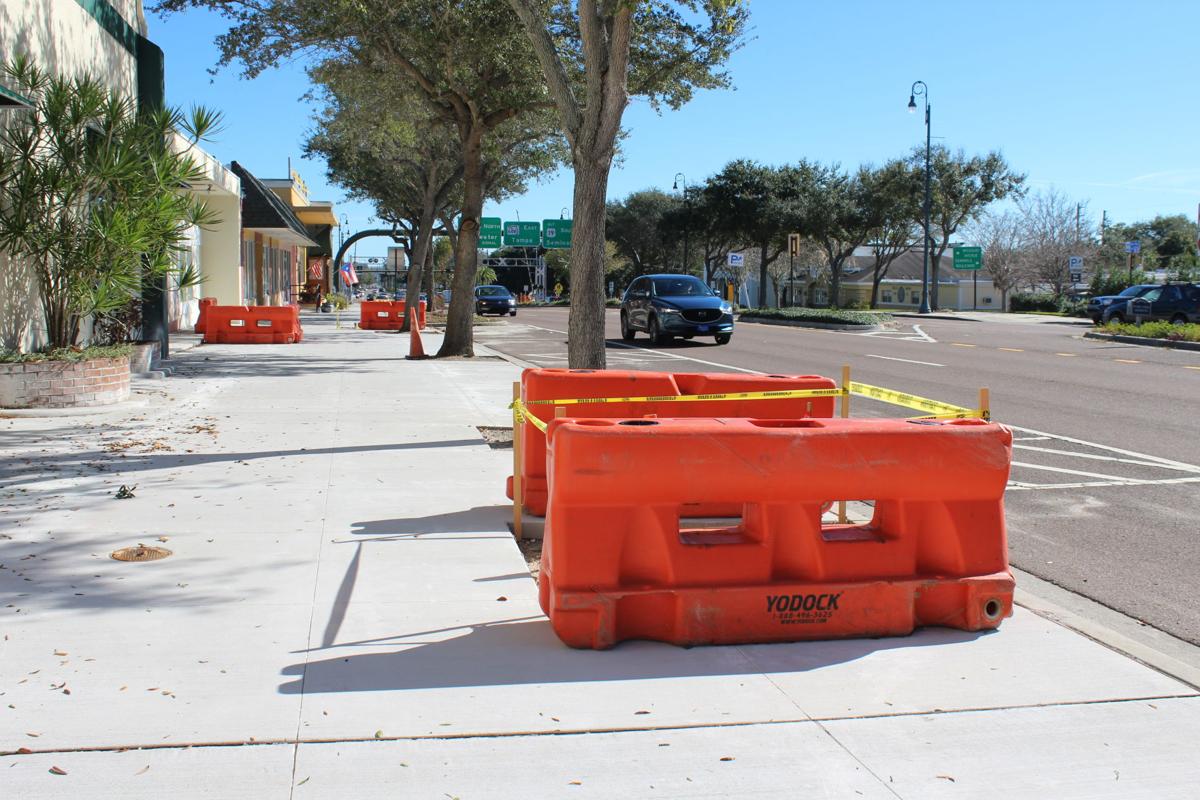 Crews have taken down the light poles on the north side of West Bay Drive to make way for new ones. 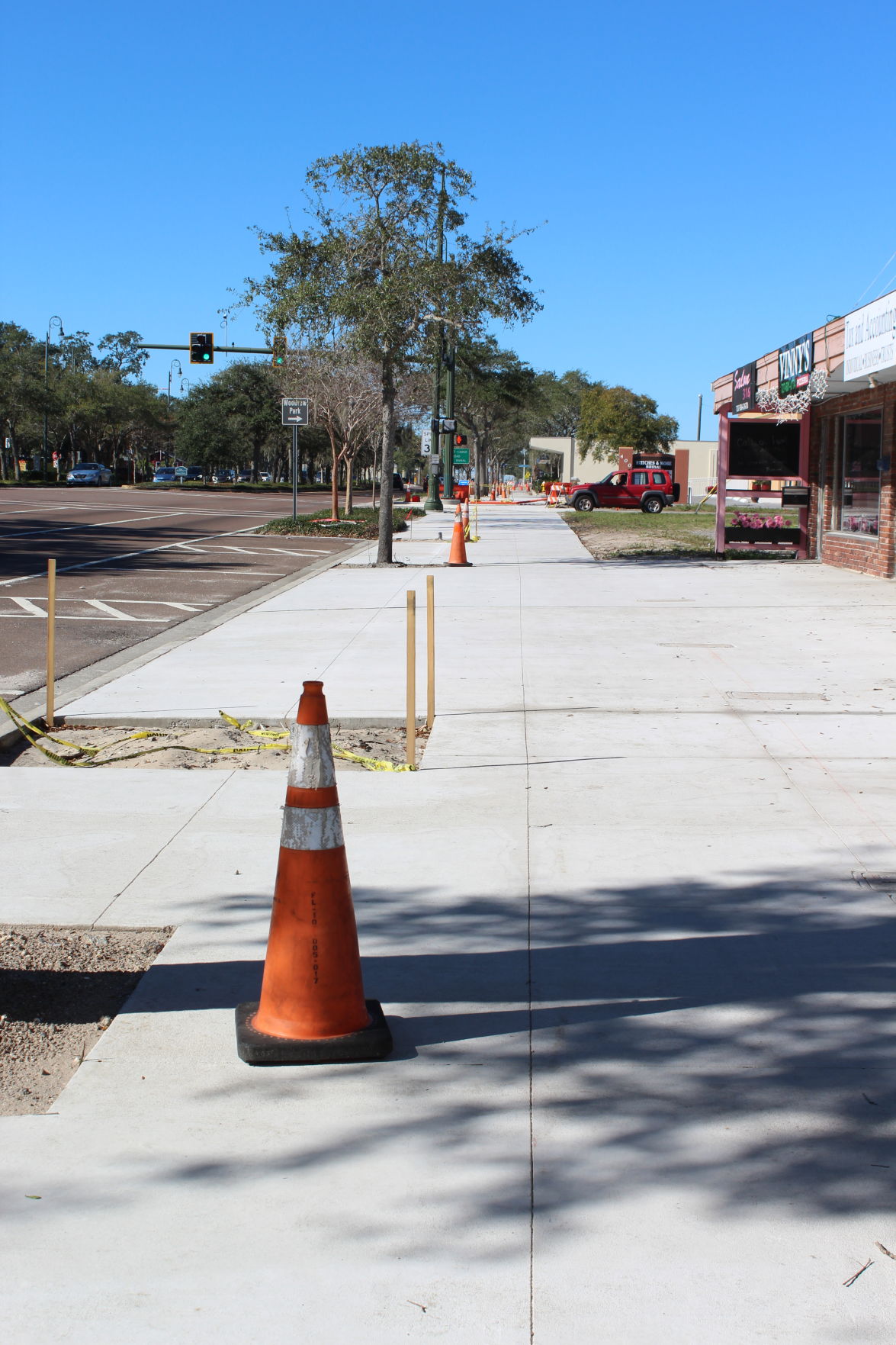 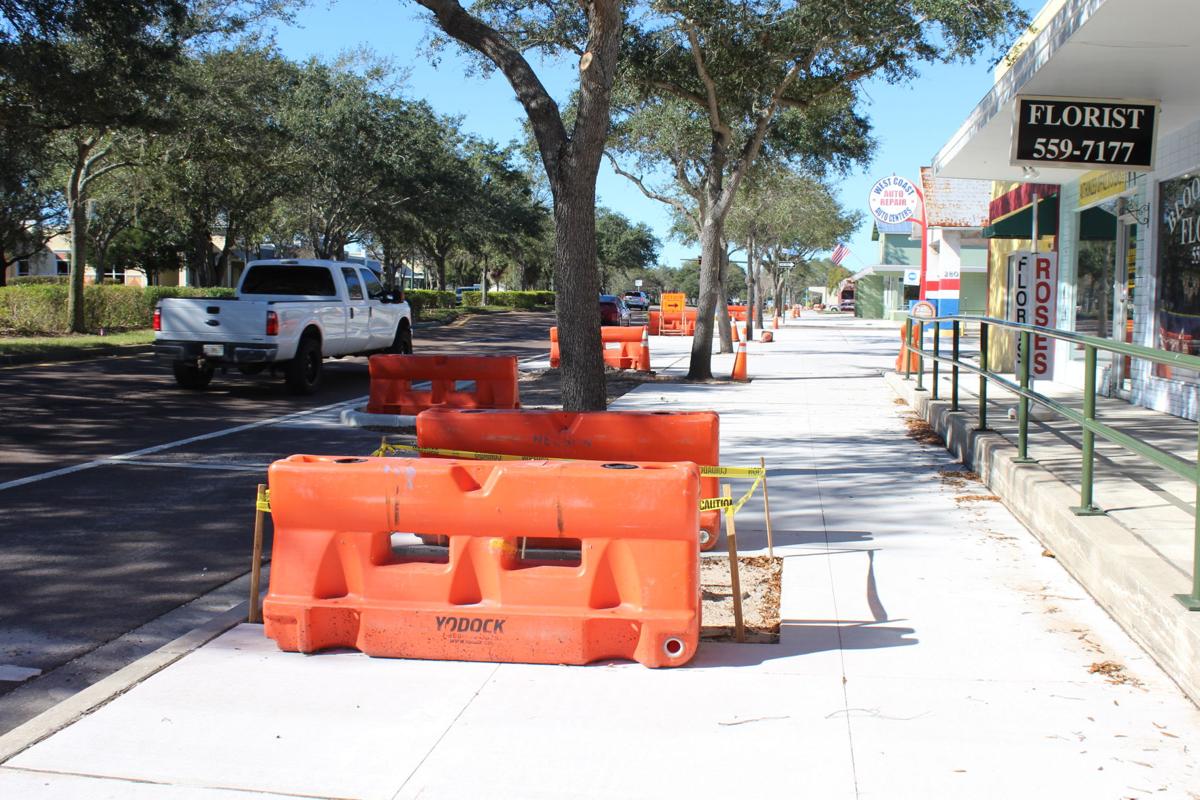 New sidewalks are part of a $3.51 million project to repair and improve the downtown section of West Bay Drive from Missouri Avenue to Clearwater-Largo Road. Starting Jan. 13, crews will begin repairing the sidewalks on the south side of the road, which will lead to a lane closure.

LARGO — Three major projects on the west side of Largo are making progress and on schedule, city officials say.

The West Bay Drive improvement project, construction of a downtown plaza and complete overhaul of Rosery Road are all prepared to move to the next phase.

Here’s a look at the projects and what lies ahead.

Work began in October on a $3.51 million project to repair and improve the downtown section of West Bay Drive from Missouri Avenue to Clearwater-Largo Road.

The first phase of the work has focused on reconstruction of the sidewalks on the north side of the road, said Barry Westmark, senior engineer with the city.

“Fortunately, we’ve had no issues with the West Bay Drive project,” he said. “In fact, the contractor is well ahead of schedule for the sidewalk replacement on the north side of West Bay Drive.”

Westmark said the David Nelson Construction Co. had five months to install the sidewalk and it has done it in less than three.

Therefore, starting Jan. 13, it will begin on the sidewalks on the south side of the road, which it also has five months to finish.

The work will require the outside eastbound lane of the road to be closed until about May, so Westmark said drivers should expect a longer commute.

“I expect the folks headed eastbound from, say, Indian Rocks Road and points farther west or the beaches are going to be experiencing some delays there,” he said, urging motorists to consider alternate routes, such as Eighth Avenue Southwest or Ulmerton Road.

While much of that comes later, Westmark said work has been started on the lighting, with poles already removed on the north side. Beginning Jan. 13, they will be removed from the south side as well, while the contractor awaits delivery of the new poles.

“So, we will have a period where we won’t have any lighting on West Bay Drive until those poles come in,” Westmark said.

He said the project is still on track to be completed by August.

Rosery Road is another heavily trafficked east-west corridor in the midst of a 17-month project.

The first part of a two-phase project to transform the road into a multimodal corridor got underway in September and has led to the road being completely shut down.

Phase 1 of the $7 million-plus project will make a number of repairs and improvements above and below ground to the corridor’s 0.8-mile stretch from the Pinellas Trail to Missouri Avenue. Phase 2 will be done at a later date and will provide similar improvements between Missouri Avenue and Eagle Lake Park.

“The contractor is well ahead of schedule,” Westmark said, referring again to the Nelson Construction Co. “He’s been able to put more pipe crews on the project than he had originally planned. We are very close to being able to start roadway construction and multiuse path construction on the segment from the Pinellas Trail to Clearwater-Largo Road.”

He said crews are laying potable water and stormwater pipes on the segment of road from Clearwater-Largo Road to CSX railroad tracks, but they are still ahead of schedule and will likely finish in the next month.

Westmark said residents may have noticed not much work done on the east side of the tracks. Since that segment will affect the shopping plaza and Teakwood Village and Shangri La mobile home parks, he said the contractor is trying to wrap up work west of the tracks so crews can expedite construction east of them.

“That, too, is the reason the contractor really wants to try to get everything tied up as much as possible west of the CSX tracks, just so we can throw as much resources as possible on the east side,” he said.

The two road projects still have a long way to go, but a project that aims to transform the southwest corner of Seminole Boulevard and West Bay Drive into a downtown plaza is not far from completion.

Seffner-based BrightView Landscape Development began work on the $505,845 gateway element in October in what city officials say will serve as a signature landmark feature for downtown.

The plaza will include a large internally lit “Largo” sign in front of a monument made of a wire green screen encompassed by glass discs lit by LEDs. It also will feature solar panels and a meandering path that aims to safely connect pedestrians or cyclists from Bayhead Action Park to downtown.

City of Largo Planning Manager Rick Perez said Medjool date palms have been planted and work on hardscaping, such as the sidewalk, is underway.

“I would say they are 70 percent into the project,” he said.

He added that the sign permit is being reviewed and the vertical elements of the green screens and the solar panel that’s incorporated into it should be coming soon.

“We are expecting it to be completed in February,” he said.