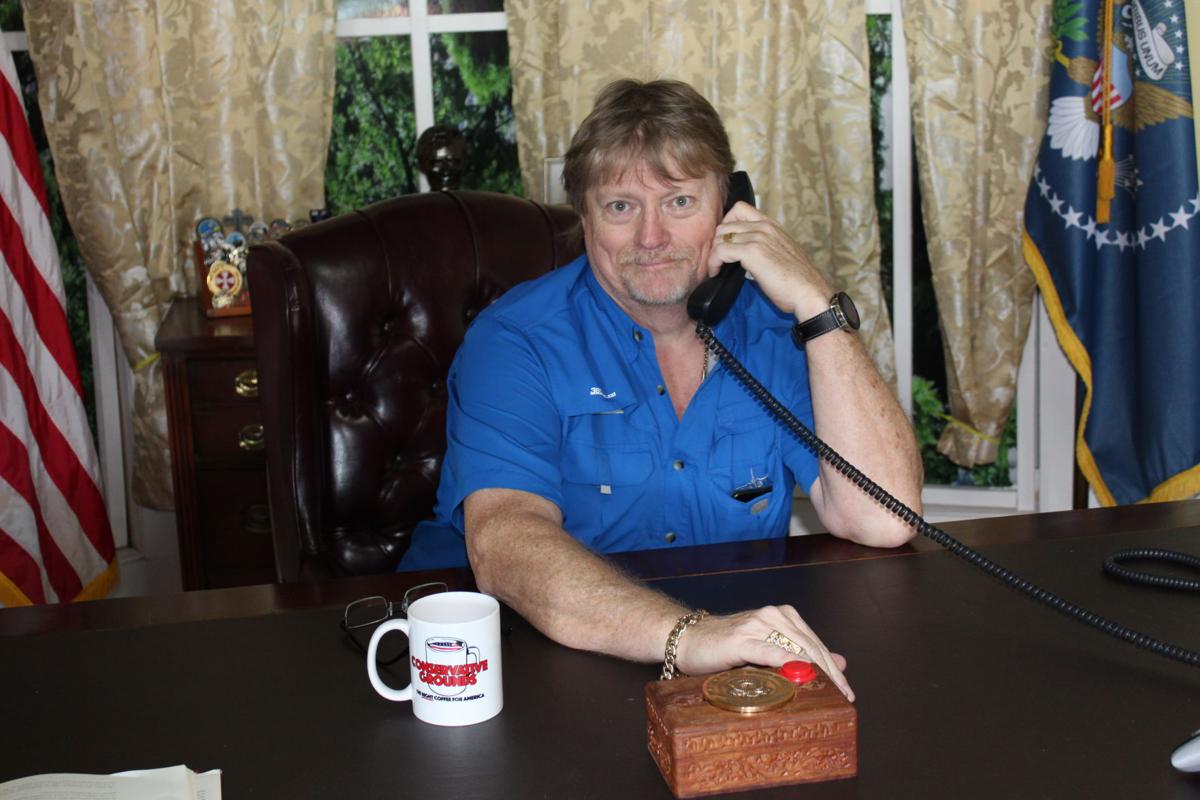 John Tatum has been taking some pretty important calls since opening Conservative Grounds on Feb. 22 with partner Cliff Gephart. The founders say the coffee shop is dedicated to “conservative values, belief in God, love for America, respect for law enforcement, where support of our military and the Second Amendment is protected.” 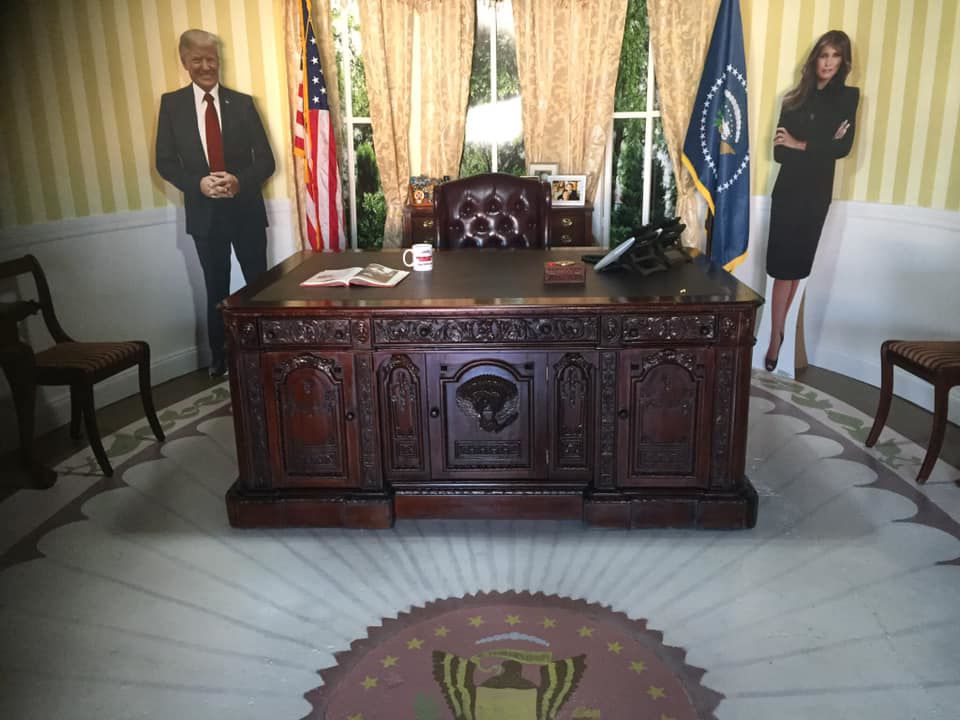 LARGO — “Surprised” is not the word John Tatum would use to describe the public’s response to the President Donald Trump-themed coffee shop he and partner Cliff Gephart opened in Largo on Feb. 22. The shop at 13344 66th St. has been very busy.

“I’m not surprised, I’m shocked!” Tatum said as customers lined up to buy coffee and bear claws at Conservative Grounds, a friendly place for those interested in everything Trump, Fox News, and America’s conservative political scene.

“I figured it would go kind of slow at first,” Tatum said, taking a rare break to chat at one of the coffee shop’s tables. “And as the word slowly got out, we would have time do what we needed to get done, such as put up some more lights, get more painting done, just little things that needed to be done.”

It wasn’t to be. Instead of a slow start, curious locals and dedicated out of towners drove to the first day’s opening. Retired couples mingled with middle-aged blue-collar workers and younger professionals in the coffee shop as Tatum helped fill orders and greeted customers.

Media interest has been high: Tatum lists a few of the interviews he and Gephart have given since that Saturday opening: the Palm Beach Post, the Tampa Bay Times, The Washington Post, an on-air interview with Jack Harris on AM Tampa Bay — Radio 970 WFLA, and calls from newspapers around the country.

In fact, Gephart told Harris, a thousand people were at the opening of Conservative Grounds, which the two founded to “celebrate all things American.”

During each of those interviews, Tatum and Gephart have explained what led them to open the shop: An employee at a Starbucks in Tempe, Arizona, responding to a customer’s fear at seeing guns, asked six police officers to either “move out of the line of sight of a customer” or leave the store.

Indeed, just about everyone under the sun (including Starbucks’ vice president) knows that’s just silly, if not particularly insulting, for police who are sworn to protect and serve their communities.

Starbucks Executive Vice President Rossann Williams quickly apologized for the employee’s actions: “When those officers entered the store and a customer raised a concern over their presence, they should have been welcomed and treated with dignity and the utmost respect by our employees. Instead, they were made to feel unwelcome and disrespected, which is completely unacceptable.”

Apology or no, for conservatives, the event represented a lack of respect from folks on the left of the political spectrum.

“I would say that was what ‘triggered us,’” Tatum said, smiling as he’s unable to avoid the temptation of a pun. “I said, this is ridiculous, how can one person get six officers kicked out of Starbucks? Because the customer didn’t feel safe?”

If you are triggered by Trump cutouts or an amazing, full-size replica of the Oval Office (including a respectfully displayed bust of Dr. Martin Luther King Jr.) and “Make America Great Again” hats, Conservative Grounds may be the place to avoid. However, it’s not something Tatum and Gephart want people to do.

“This is a place where people are free to come and enjoy their coffee and socialize un-harassed, a place where you don’t have to worry about going,” Tatum said.

Customers also want to show solidarity with police, firefighters, and other first responders.

“On opening day, we had personnel from the Coast Guard, the U.S. Navy, we had the U.S. Army here, the Pinellas Park Police, Largo Police Department, and the Pinellas County Sheriff’s Office,” Tatum said. “Every time an officer or a firefighter walked through the door, a customer would say, ‘I got his,’ or ‘I’ll take care of it.’”

So, Tatum created a Pay it Forward program for customers who want to buy coffee or a donut for military or civilian responders.

“This jar is our pay it forward for our first responders,” Tatum said, “It’s to buy an officer or fireman coffee. Or, for the gentleman who was just here in his firefighter uniform; he didn’t pay for anything he got in here. Customers did that for him.”

Customer sign their contribution, so the barista behind the counter can tell the officer that Steve or Mike or Cynthia “asked to buy your coffee this morning.”

Tatum also asks first responders to sign their names on a blank wall dedicated to law enforcement, military, and fire and rescue workers.

On the other hand, many customers are here to express solidarity with American values they see being diluted in nearly every corner of society.

Actually, it was a very friendly place on this Friday morning as customers chatted about “His Trump-ness,” discussed gun rights, weighed the emerging coronavirus — and discussed any number of political issues.

“I saw it on social media first, on Instagram,” Baber said. “It is one of the only coffee shops in the Tampa Bay area that has this type of … mentality that I know of, and I’m trying to stay away from Starbucks, trying to do the more local coffee shops rather than the corporations.”

He also said he is “definitely” more comfortable here than other coffee shops.

“It fits my mantra; I’m a Republican and this absolutely fits, it piqued my interest and I’ll definitely come back.”

He feels comfortable expressing his conservative opinions in public.

“The country has a mentality at this point of, ‘If you don’t believe me, then you’re wrong,’ and that is absolutely not correct. It doesn’t mean I’m right and you are wrong. That’s my opinion. We can all have different opinions and different beliefs.”

And: “The country is divided doesn’t mean you reject the nation,” he said. “I fought for the nation.”

Joining him at his table is his colleague Phil Paxson, who also heard about Conservative Grounds on social media. He and Baber are here on Friday morning for a business meeting. Like Baber, Paxson is a Navy veteran. Paxson served three tours in the Middle East and two in the Caribbean as a U.S. Navy aircraft handler. Those are the folks one sees signaling to F-18 Hornets and other aircraft with hand batons on carrier decks.

“I’m a conservative and I am a Trump supporter,” he said.

People’s reaction to his political beliefs vary — based on where he is in the country, Paxson said.

“It depends on where I am; I just got back recently from California, it was completely different there,” he said. “Then I was in Asheville, North Carolina, last weekend, and what a difference. I have seen the extreme on both sides, and Tampa seems to be in the middle.”

He liked the mock Oval Office, the Trump cutout, and other aspects of Conservative Grounds.

When it comes to gun control, Paxson, who owns handguns, says a little bit of a gun ban can turn into a complete ban on all guns.

Tatum has more in store for Conservative Grounds. He’s already fielded calls from folks hoping to open a franchise. As for his shop on 66th Street, one can purchase MAGA hats, T-shirts, and other Trump gear and there are plans for a drive-through window, evening Florida concealed weapons permit classes, and other additions to the shop’s evening schedule.

Tatum recently held a special airing of the Democratic Party presidential debates at Conservative Grounds, which he dubbed “Comedy Night.”