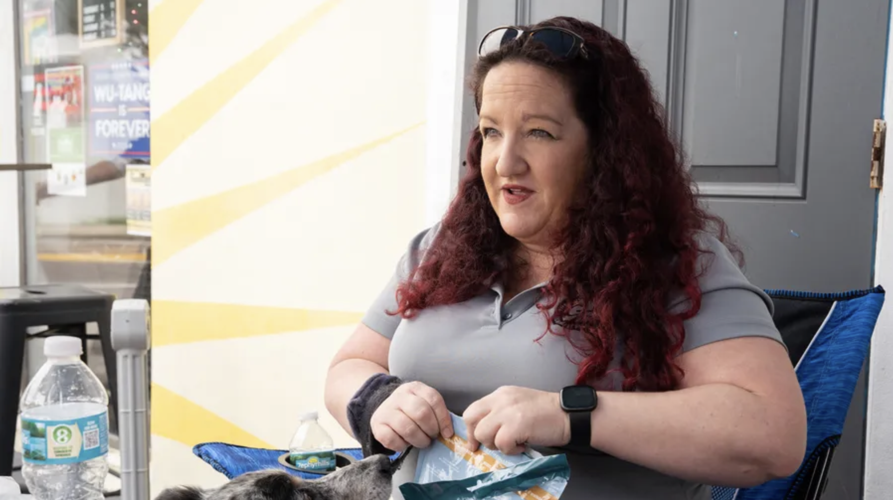 April Goodwin, the founding attorney at The Goodwin Firm, gets ready to give her Australian shepherd, Chewie, a treat outside the If I Brewed the World Brewery during a dog-friendly bar crawl event on Dec. 11 in St. Petersburg. 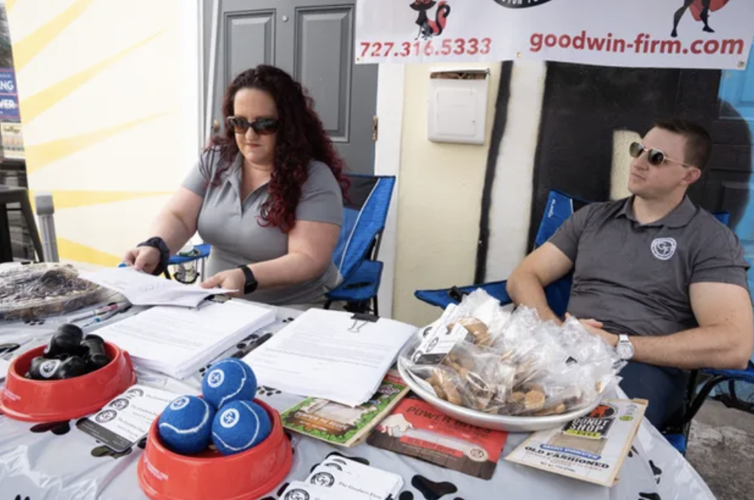 April Goodwin, founding attorney at The Goodwin Firm, stamps someone’s dog-friendly bar crawl passport next to attorney Andrew Silvers outside the If I Brewed the World Brewery on Dec. 11 in St. Petersburg. The firm advocates for pet rights by representing pet owners and pet businesses.

April Goodwin, the founding attorney at The Goodwin Firm, gets ready to give her Australian shepherd, Chewie, a treat outside the If I Brewed the World Brewery during a dog-friendly bar crawl event on Dec. 11 in St. Petersburg.

April Goodwin, founding attorney at The Goodwin Firm, stamps someone’s dog-friendly bar crawl passport next to attorney Andrew Silvers outside the If I Brewed the World Brewery on Dec. 11 in St. Petersburg. The firm advocates for pet rights by representing pet owners and pet businesses.

When April Goodwin first advertised services for pet law on her firm’s website, business came in “slowly but surely,” she said.

The 49-year-old began advertising pet law services when she opened her firm in 2015. A handful of years before, she had read that pet law was recession-resistant and she had maintained an interest since then. When she started her firm, she began offering the service, along with handling employment law cases.

Some of the shift in her business is thanks to the economy — with low unemployment rates, people are more likely to leave their jobs rather than sue their employers, Goodwin said. But the pet law business is also growing, she said.

In criminal law, Florida includes penalties for animal abuse and neglect — crimes that can range from a first-degree misdemeanor to a third-degree felony if the offense was repeated, “excessive” or resulted in the “cruel death” of an animal. Locally, after a Tarpon Springs man shot and killed another man’s dog, prosecutors charged him with animal cruelty, though he was acquitted by a jury after his attorney argued he was acting in self-defense. In November, a woman who pleaded guilty to throwing her ex’s pug off a balcony was sentenced to 364 days in jail.

But when it comes to things like custody disputes over an animal, pets are considered property under Florida law.

That’s where Goodwin and her firm come in. Goodwin handles everything from pet custody disputes to dog bites to veterinary malpractice cases.

Goodwin employs one other lawyer at her firm, Andrew Silvers, who started as a legal assistant before passing the Bar exam a little over a year ago. Silvers said about 75% of the cases he handles are pet law matters.

Before coming to the firm, Silvers said he never imagined he would be practicing pet law. But after connecting with Goodwin through a mutual acquaintance, Silvers landed a job he said utilizes the skills he gained in previous jobs working for insurance firms.

“When it comes to pet rights and pet law, technically there is no pet law, but it is like a mix of property, personal injury, maybe a little bit of contracts in there as well,” Silvers, 32, said. “It’s a nice blend of all different sorts of cases.”

Goodwin said the majority of the pet law cases she handles involve custody disputes over animals, followed by dog bite cases. She doesn’t handle cases involving married couples who are splitting up, leaving that to divorce attorneys. However, she frequently sees clients who are in disputes over pet custody with unmarried, cohabitating partners, or sometimes disputes between parents and their adult children.

During the pandemic, Goodwin said, she began to see a rise in interest in the pet law side of her business. People were adopting pets more frequently. Some were getting into arguments with family members or partners during quarantine. And they had more time to research pet law.

“Everybody was online a lot more,” Goodwin said.

Most of the cases she has handled involved dogs, though she has seen some cases involving cats and even birds.

Many of Goodwin’s clients are empty-nesters or in their 50s — a demographic she said tends to have more disposable income.

Goodwin said she’s trying to shift the firm to focus more on preventative measures and education — for example, drawing up legal agreements for couples agreeing on who would get the pets if they split.

“The time to come up with agreements is when you love each other and you’re getting along,” she said.

Goodwin recommends that people get written proof of ownership when getting a new pet. Sometimes, Goodwin also sees custody disputes after someone asks a family member, friend or sometimes even a stranger to pet-sit. Writing up an agreement before the pet-sitting begins, explicitly stating that you are not transferring ownership, can help avoid this dilemma.

Silvers also offers practical advice to pet owners — don’t leave dogs unsupervised in a yard, make sure your fence is tall enough that your pet can’t jump over it and keep your dogs on a leash when you’re taking them outside a fenced area.

Both Goodwin and Silvers know what it’s like to care for a pet. Silvers has a yellow lab mix named Georgia, and also watches his in-laws’ Boston terrier, Camo, for about half the year when they’re out of town.

Goodwin has a 13-year-old Australian shepherd named Chewie — short for Chewbacca. In her office, she keeps pictures of other pets that have passed away, including a dog named Dr. IndyAnna Jones and Hugo, a cat she adopted in law school and named after Supreme Court Justice Hugo Black.

While Goodwin said her knowledge of property law helps her navigate her cases, she also recognizes that pet law brings with it some “special considerations.”