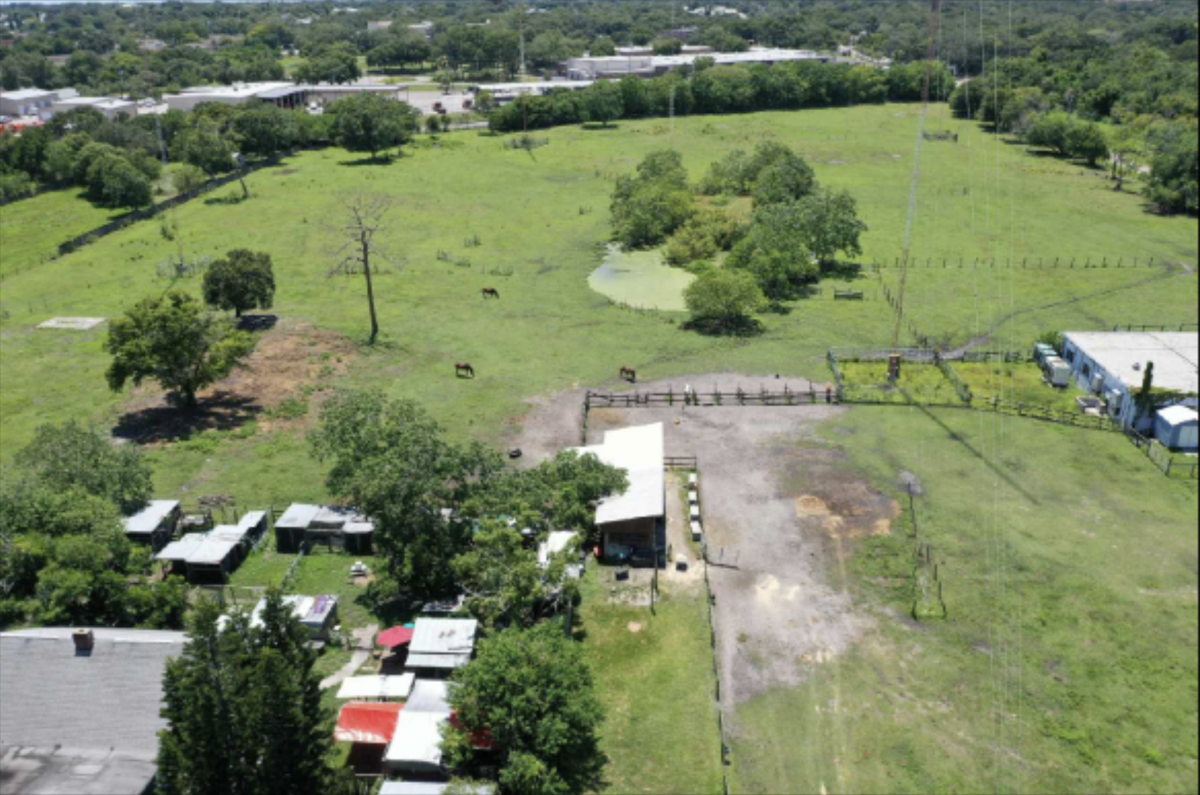 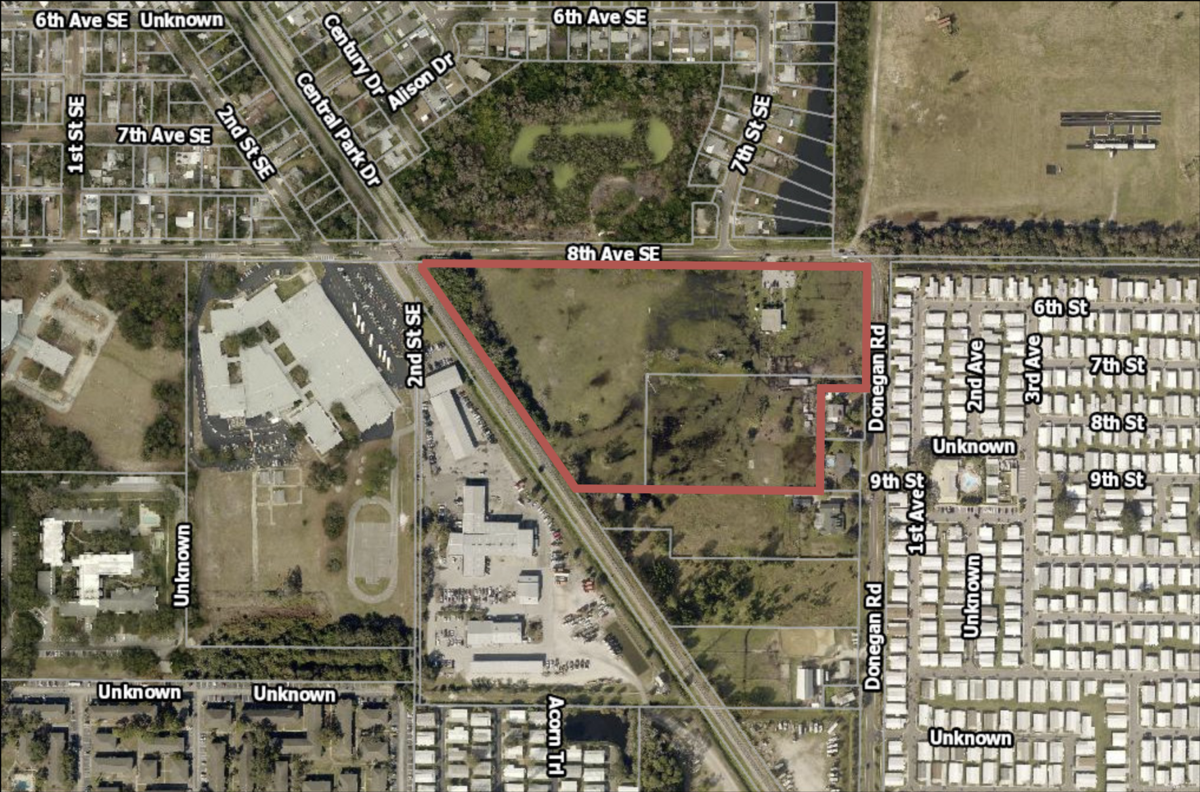 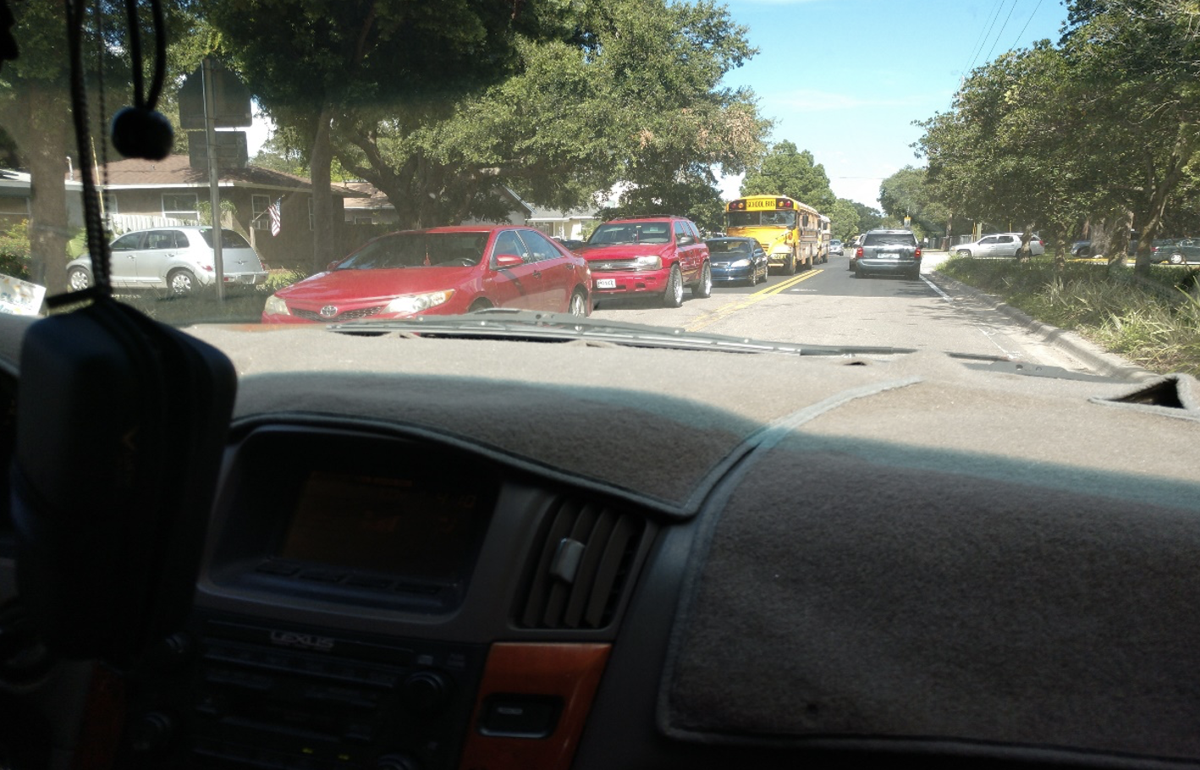 Traffic along Eighth Avenue Southeast during school dismissal was one of many reasons dozens of neighbors of the proposed multifamily development stated their case why the city should turn down the apartment complex.

Traffic along Eighth Avenue Southeast during school dismissal was one of many reasons dozens of neighbors of the proposed multifamily development stated their case why the city should turn down the apartment complex.

LARGO — A developer seeking to construct an apartment complex near Largo Central Park will have to scale back the project after city commissioners rejected the plan for the 231-unit facility Oct. 5.

Dozens of neighbors of the proposed multifamily development pleaded with commissioners to turn away Belleair Development Group’s plan to build the $60 million to $70 million facility at 800 Eighth Avenue SE adjacent to Largo Middle School.

They came with stories of traffic jams and close calls along the two lanes of Eighth Avenue Southwest and Donegan Road. Some cited compatibility, stormwater, flooding, and environmental concerns. Many wearing “Save Lake Largo” T-shirts even said the 15.5-acre property had historic significance, claiming it was the site of the first dairy farm in Pinellas County and was formerly part of the lake the city was named after. The lake was drained in the early 1900s, but residents say the history remains.

Ultimately, however, it was the compatibility, traffic and safety concerns that led commissioners to vote 4-3 to reject a development agreement between the city and the Pinellas Park developer.

“Please stop and think about the safety of our current residents and the children who live in this area,” Jill Shafer, a resident of the nearby New Haven condo community, wrote to the commission. “We cannot handle more housing, more traffic, and the increased risk of crime and death. Every single inch of space in this town does not need to be filled with people.”

According to a site plan, the proposal calls for five four-story buildings, a 30-foot landscaped buffer between the complex and single-family homes to the south, a 10-foot-wide multiuse path along both roadways, and a retention pond in the center designed to handle stormwater runoff.

A large portion of the property on the northwest corner of the site would remain green space, featuring a walking path, dog park, playground and shelters.

The complex would have one main access off Eighth Avenue Southeast, a secondary emergency access off Donegan Road, and 428 parking spaces.

The developer is also seeking a density bonus by agreeing to set aside 30% of the units for affordable housing.

Kevin Reali, an attorney representing BDG, addressed residents’ concerns about the project that would require a land-use change for the property from industrial to residential.

He said the property is not in a flood zone, but the development will, in fact, improve any stormwater problems in the area, because certain upgrades will have to be made to meet city and state requirements.

He added that an extensive traffic study is underway and if improvements are needed, then the developer is prepared to make them.

He also cited a study from the Institute of Traffic Engineers that showed a multifamily development produced far less traffic than the other industrial uses BDG could put on the property without commission approval.

Some of those uses included a supermarket, industrial park, transfer station, storage facility or recycling center.

“It’s no secret that he (BDG owner Carlos Yepes) prefers to do this multifamily, but it also comes with the added benefit of being better than what can be done by right,” Reali said, noting that more market-rate and affordable housing is a win for Largo.

For residents with traffic or stormwater concerns, Commissioners Jamie Robinson and Samantha Fenger said this proposal could be a solution.

“The development of this property would probably eliminate all of the situations that we’re seeing out there now,” he said.

In his nine years on the commission, Robinson said the city has discussed several developments and neighbors also worry about traffic.

“The concerns when it comes to the increase in traffic rarely come to fruition,” he said.

A supermarket, which the developer could build without approval, would be much worse, he said.

Commissioner Eric Gerard agreed and said the project would benefit the entire community.

Commissioner John Carroll, however, wasn’t swayed by that argument.

The location on the two-lane road, he said, doesn’t lend itself to a high-traffic use like a supermarket or retail center, so he doubted one would be built there.

He said he has not heard one positive comment from the public about the proposal, but it was the traffic concerns that was stopping him from supporting the plan.

“I cannot get past and I can’t be convinced that that roadway and that area down there is going to support this kind of traffic.”

He said the nearby areas have fewer units per acre, and he supports increasing density in activity centers, but this isn’t in one.

“It would’ve been a lot easier for me to support a change in land use that’s equivalent to the adjacent property,” he said. “I think this is an opportunity. I’d hate to miss it, because as we all know, the things that are allowed in an industrial use would be a tough fit, and there’s not many opportunities for us to stop those things.”

He said he hoped BDG would return with a project with fewer units that fits in more with the neighboring residential developments.

A vote to approve the development agreement was denied 4-3, with Brown, Carroll, Michael Smith, and Donna Holck voting against the proposal.

A vote to deny the agreement was approved 4-3 along the same lines.

The future land use of the property remained in question, though.

After hearing the discussion, Reali told City Attorney Alan Zimmet that BDG would like some time to revise its proposal.

“They want to essentially regroup and consider their options and maybe come back and have some more discussions with staff and the commission,” Zimmet said.

Therefore, the commission unanimously voted to continue the land-use change to Dec. 7.