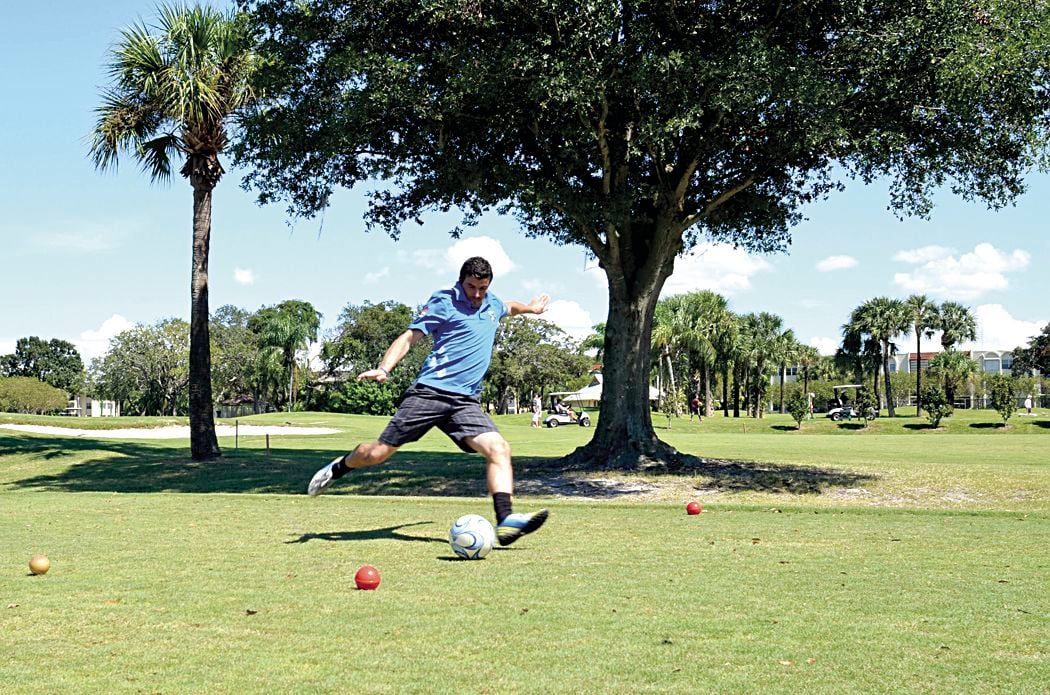 Alejandro Araias of Miami gets a running kick at a soccer ball during the first footgolf event held at the Largo Golf Course in October 2013. Footgolf has helped keep the course afloat and even helped it turn a profit this past year. 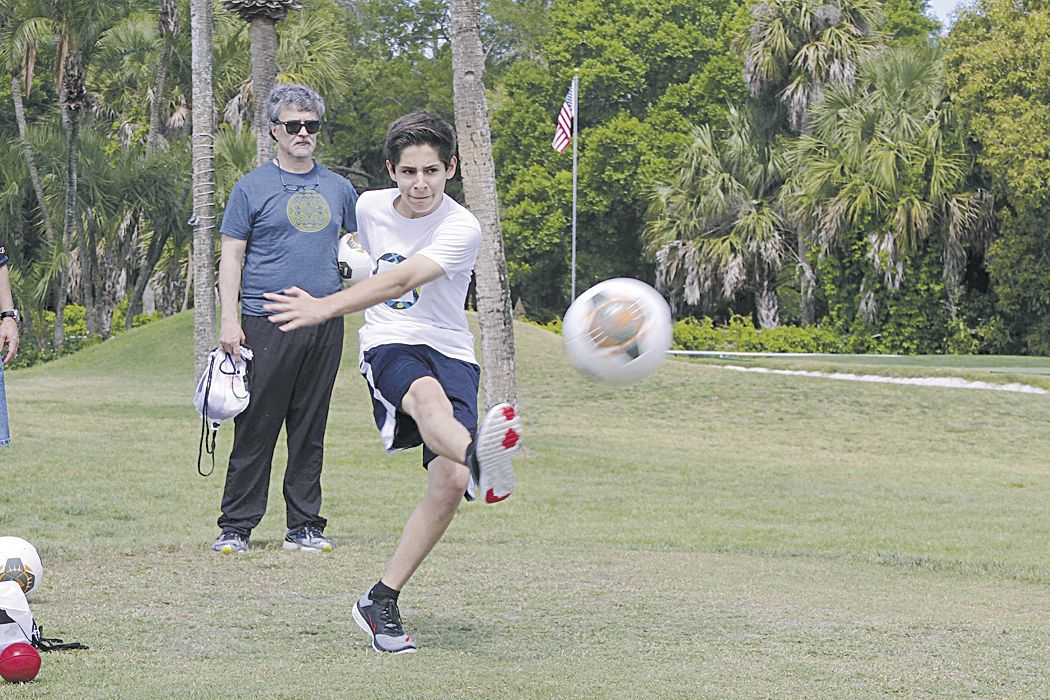 Mitchell Albenzio of Oldsmar “putts” a soccer ball during the Pinellas Chapter of the Special Olympics’ first footgolf tournament in April 2016. The course hosts several fundraisers that benefit local charities and organizations.

LARGO — The economy has not been kind to the game of golf the past 20 years. Fewer golfers are hitting the links and several courses in Pinellas County have closed.

The Largo Golf Course has also struggled, consistently losing money during that span.

But it has survived, and it appears there might be a glimmer of hope for the 18-hole, par 62 executive course that opened in 1969.

For the first time in a decade, the course located on 46 acres in east Largo ended the fiscal year in the black, generating more than $1 million in revenue and about $7,500 in profit.

Lara Khoury, the city’s recreation business manager, said it’s no accident the course has been trending up the past two to three years.

Khoury said staff at the course has introduced several new programs and practices in recent years, such as golf bike rentals, pub leagues and footgolf, which is a combination of soccer and golf played with a regulation soccer ball.

“Initially we had started with footgolf a few years ago and that really helped generate some different traffic,” she said.

Khoury said staff is also looking at giving players alternatives to the traditional nine and 18 holes, creating pub leagues geared toward those who can play after work.

“We’re looking at bringing other sports like disc golf and trying to incorporate more events and tournaments,” she said, referring to another hybrid sport that combines the rules of golf with a Frisbee.

A tournament earlier this year was a success, she said, so plans are in the works to host another one in the spring.

The goal has been to attract nongolfers, such as Mayor Woody Brown.

“That (the disc golf tournament) was real successful,” he said. “I don’t know if it made a whole lot of money for the course, but everybody seemed to have a good time.”

Brown said those kinds of out-of-the-box ideas are what needs to continue for the golf course to be sustainable.

Staff also managed to cut expenses when it ended the lease with the Golf View Cafe, replacing it with an in-house concession area that was expected to generate more than $40,000 each year.

The course also has benefited from the misfortune of others, such as the Tides and Baypointe in Seminole and Airco in Clearwater.

Khoury said the popularity of Tiger Woods led to a boom in the opening of courses that weren’t sustainable, saturating the market.

Many of those courses have closed, however, leaving players with fewer options.

“We’ve managed to survive a lot of course closures in the area, so that’s part of the success too,” she said. “We’re gathering those courses’ leagues and players.”

While it made a profit last year, the course still lost a combined $868,048 over the previous eight, so whether it remains a course is still undetermined.

It will also require major renovations, including a new parking lot, so staff is currently working with the Urban Land Institute, a nonprofit network of real estate and land-use experts, on in-depth analysis of what options exist for the site, such as a park or development.

Khoury said the results of that study will likely be presented to the City Commission in the first quarter of 2020.

Brown said he’s in no rush to make drastic changes, especially if it can continue to make progress.

“If we’re not losing a bunch of money, then I’m in support of keeping it a golf course and researching ways of making it more attractive or more financially stable,” he said.

Khoury said it’s also important to remember that the course is a community asset because it serves a greater purpose than just golf.

“While they bring in their own income and they have players that play the actual sport, the venues themselves are used traditionally to raise funds for a multitude of nonprofit agencies across the country, and ours is not excluded,” she said.