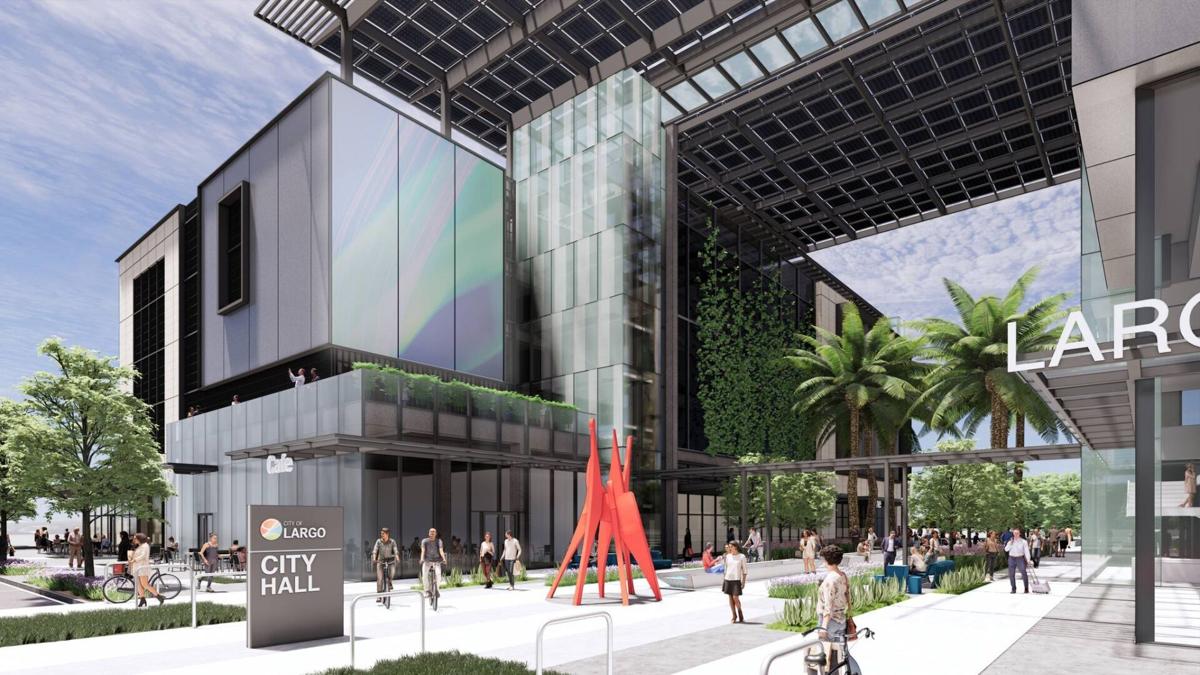 Consultants say City Hall will just be an anchor tenant for the facility, so they suggested a new name that encapsulates the city’s vision. Architectural and design firm ASD|SKY proposed the name “Horizon.”

LARGO — City leaders say the new $55 million City Hall complex is more than just a municipal building. It’s a catalyst for downtown, a model of sustainability, and part of their vision for the future of Largo.

Consultants say such a complex needs a name to match that ambition.

During a City Commission work session Nov. 9, they unveiled that proposed name: “Horizon.”

“It spoke to not only the poetic nature of this building, but also spoke to the physicality of the architecture and also like a vision for the future,” said Eric Morris of architectural and design firm ASD|SKY. “Horizon can mean a convergence of visions. It can mean a look towards the future. It also really corresponds with the quite large solar canopy that’s going to be generating all of this amazing green energy for the building and complex.”

The vision for this project, Morris said, is unusual in that it will have a municipal function but also serve as a catalyst for both commercial and sustainable activity.

The five-story mixed-use facility is planned to be constructed on the north side of West Bay Drive between Fourth and Fifth streets. It will have 18,000 square feet of ground-floor commercial space and a separate parking garage with more than 300 parking spaces. It also will feature a public plaza, opportunities for outdoor dining space, and flexible indoor and outdoor event spaces.

Morris said the name could also be tweaked to emphasize it as a destination, citing suggestions like “The Horizon,” “Horizon Bay,” or “Horizon West Bay.” Signage for those names would be placed on the side of the facility.

“I think that Horizon became not just a name for the complex, but really that kind of encapsulating notion of what this building and complex at large can be for Largo,” he said.

City administration wanted to gauge commissioners’ reaction to the name, so this was the first opportunity they had to see it. That reaction was slightly mixed, but generally positive.

Commissioner Jamie Robinson said he liked the name because the building will be much more than just City Hall.

“This is different than anybody’s ever done. Especially here in Pinellas County and as far as I know, at least Florida,” he said. “I just think that we have the opportunity to really set ourselves apart.”

He did, however, recommend adding wayfinding signage so that residents will be able to identify the building as a municipal complex.

“This doesn’t look like any other municipal building in the country,” he said. “So, if we tell someone to go to City Hall, they’re going to drive by that a hundred times when it says Horizon. We need to identify it in some way as a municipal building.”

The name elicited other concerns as well.

Commissioner Donna Holck, for instance, said after hearing the explanation it made sense, but her first thought was that it sounded like Verizon.

“I don’t want it to sound like a shopping mall either. And that’s what I see by calling it just Horizon,” she said.

Vice Mayor Michael Smith said he thought it sounded like an apartment complex.

Commissioner John Carroll agreed with the wayfinding concerns, but also suggested seeking public input and explaining the reasoning behind the name so it doesn’t catch the community off guard.

Mayor Woody Brown said he liked the name and understood the concerns about it, but he was more concerned about the tenants than the moniker.

He cited the mixed-use event space Armature Works in Tampa. That name doesn’t mean much to most people, he said, but it’s successful because of its tenants and the reputation it has created.

“I’m more concerned about what they (residents) would like to see make this successful as a building,” he said.

If the building is a success, he said, then any name will do.

“It doesn’t matter if we called it Swiss cheese,” he said.

Brown, who owns a chiropractic office blocks away from the proposed facility, added that the downtown merchants just want to see movement.

“I don’t think any of them really care what it’s called,” he said. “They want it to be successful and they want it built last week.”

Some of them, he added, still don’t believe the project will come to fruition.

The name isn’t confirmed, but a consensus of commissioners agreed to move forward with the process and gather public feedback.

Commissioner Eric Gerard said the name works because it encapsulates the idea that the facility will be not just a building, but a destination.

And he believes it could benefit the entire area.

“I can see it actually expanding to the entire downtown district. I really do,” he said.