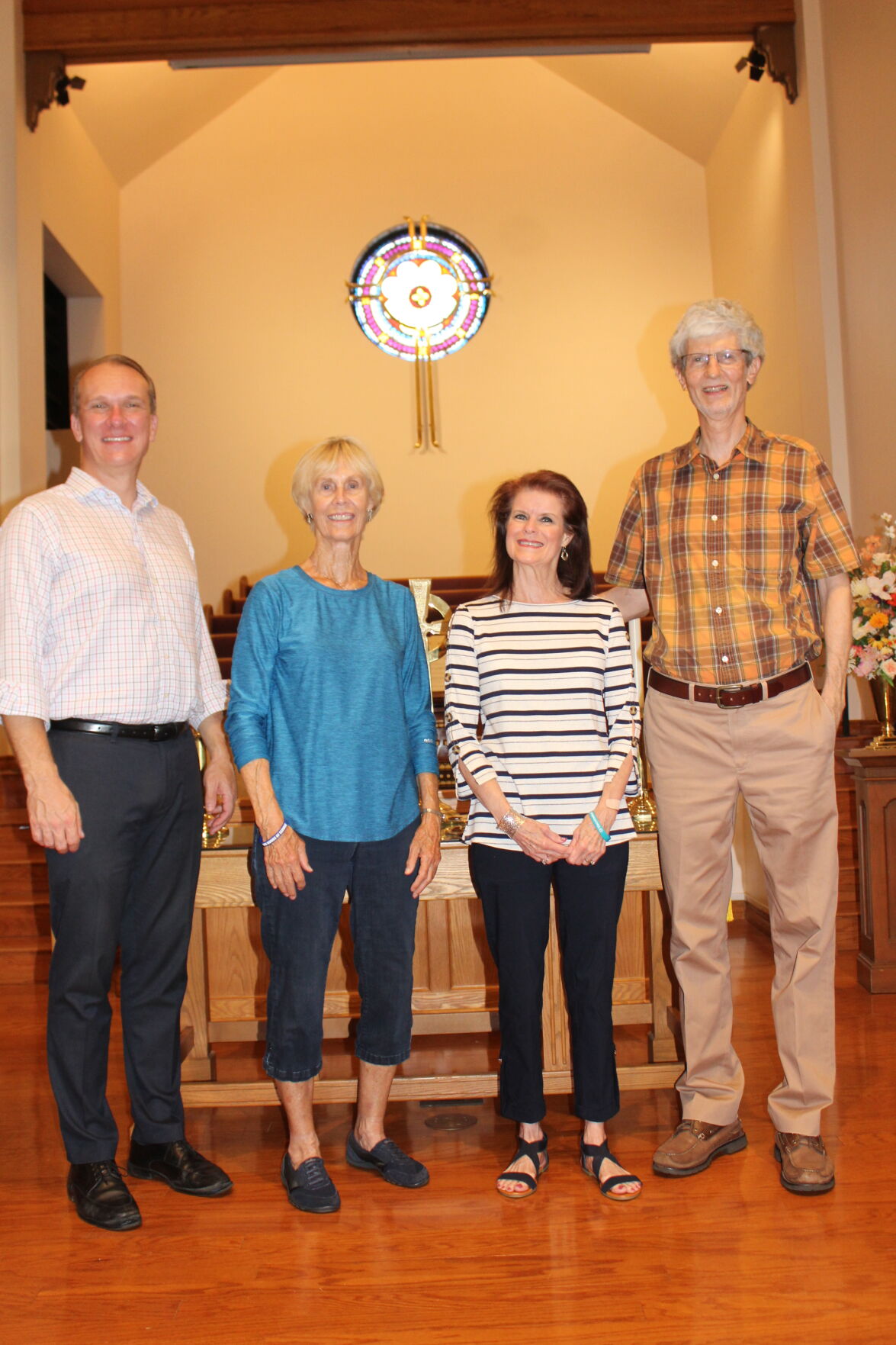 From the left are First Presbyterian Church of Dunedin Pastor Dave Shelor, Beverly Fisher, Candy Barnette and Eric Houghton in the church sanctuary. They are working on plans for the church's 150th anniversary celebration. 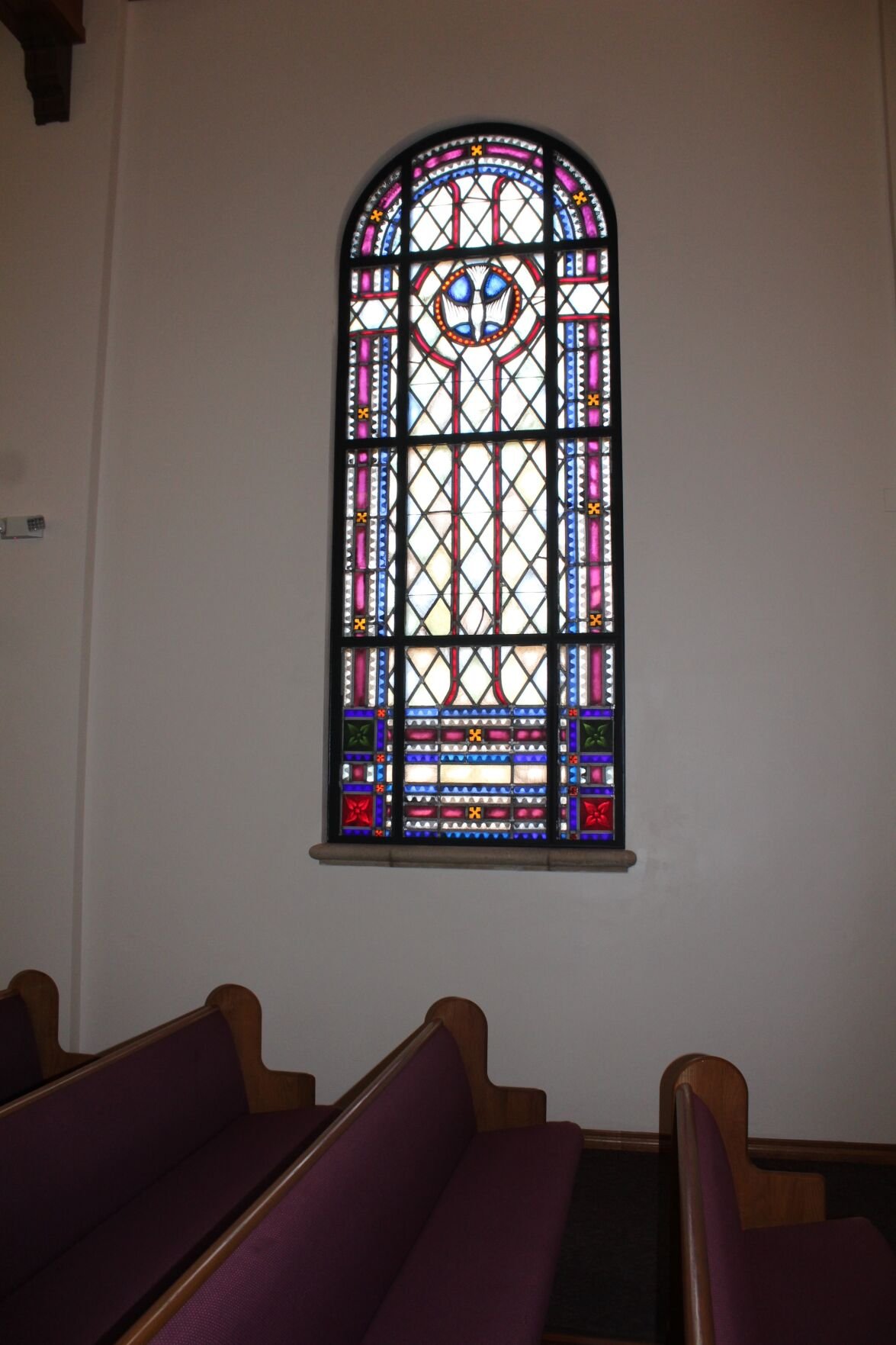 Stained glass windows in the church sanctuary were recently refurbished. 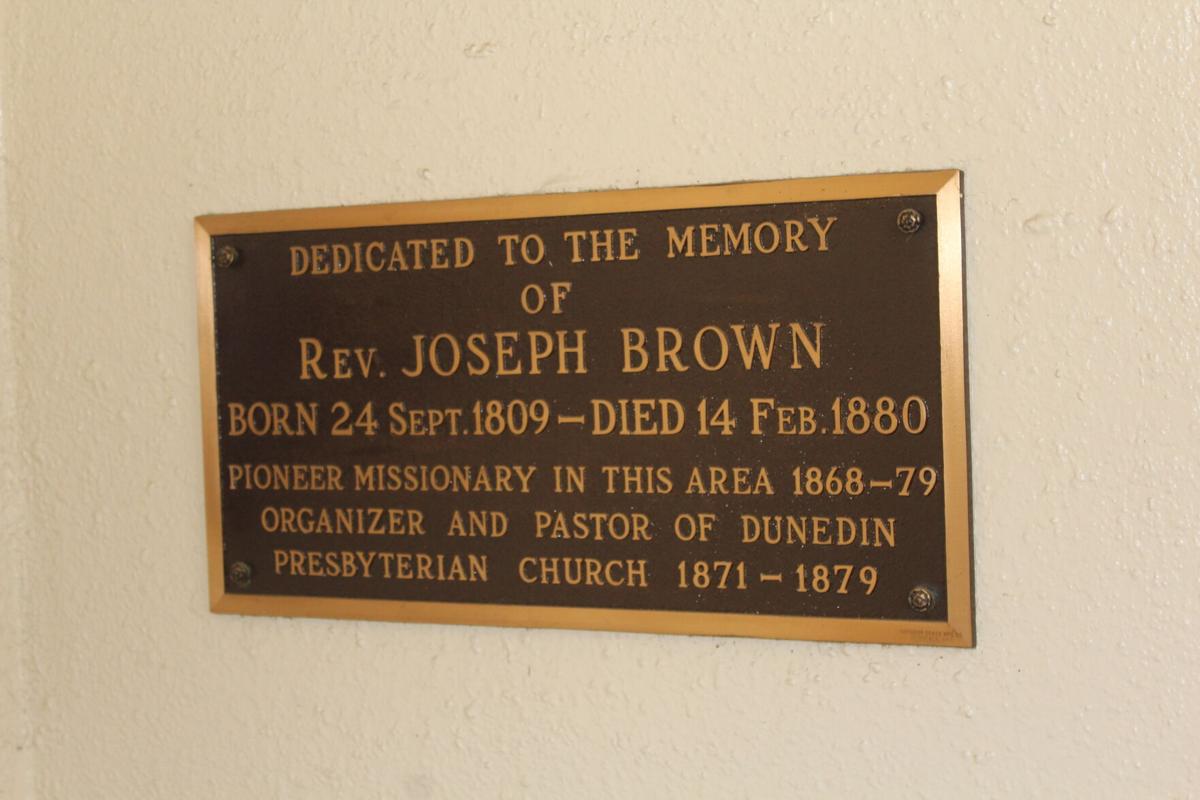 A plaque at the church pays tribute to church founder Rev. Joseph Brown. 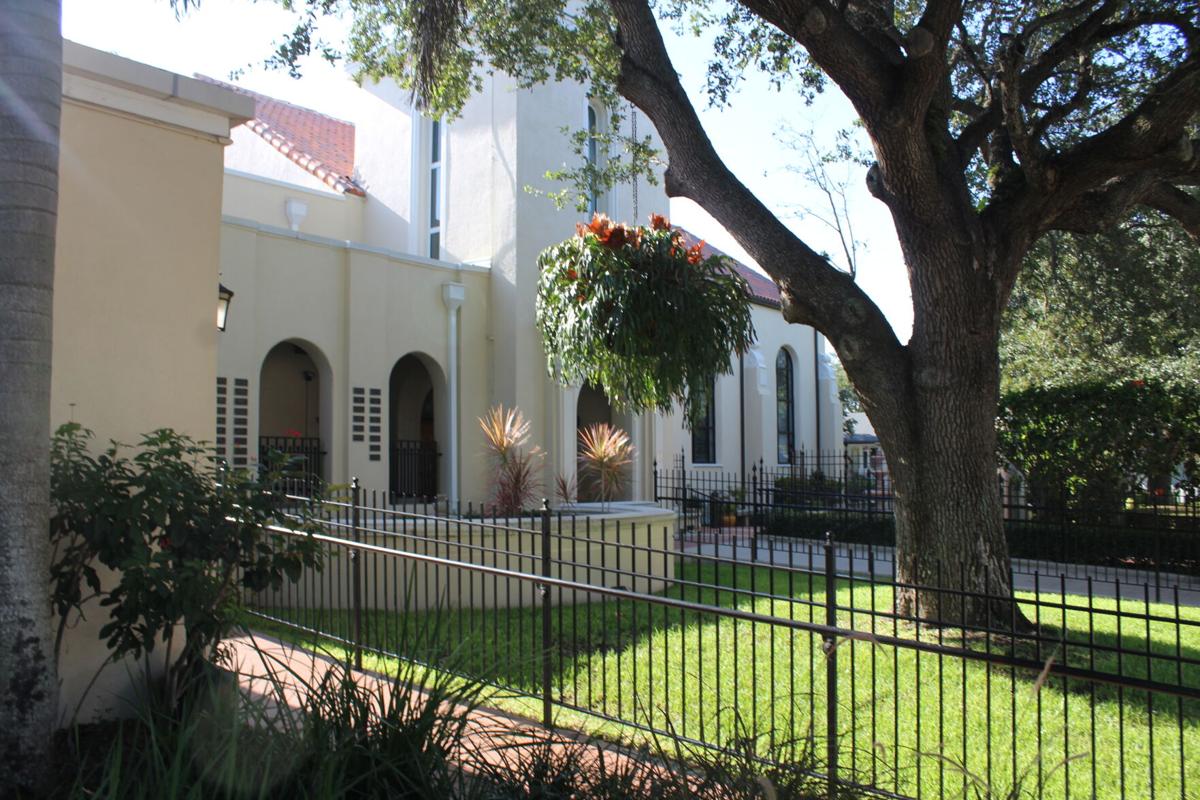 The first Presbyterian Church of Dunedin has a rich history. It has 200 to 250 members.

From the left are First Presbyterian Church of Dunedin Pastor Dave Shelor, Beverly Fisher, Candy Barnette and Eric Houghton in the church sanctuary. They are working on plans for the church's 150th anniversary celebration.

Stained glass windows in the church sanctuary were recently refurbished.

A plaque at the church pays tribute to church founder Rev. Joseph Brown.

The first Presbyterian Church of Dunedin has a rich history. It has 200 to 250 members.

DUNEDIN — The ears of First Presbyterian Church of Dunedin's late founder may be burning.

On Sunday, Nov. 7, First Presbyterian Pastor David Shelor will arrive by boat at Edgewater Park, as Brown did 150 years ago. Brown became the first minister in the area, church members said.

Shelor will don attire similar to what Brown wore during his ministership.

Plans also call for a bagpiper to perform as Shelor arrives on shore and leads a procession to back to the church.

"Hopefully, we can have the piper pipe us back here," said Candy Barnette, who is helping with plans for the event.

A service at the church will be held at 10:30 a.m. that day, followed by the installation of a "time box," similar to a time capsule, inside the sanctuary and the placement of a historic preservation plaque on the sanctuary's external wall.

Beverly Fisher, who is on a committee pertaining to the celebration activities, said the box will include donations from the congregation on ways "they kept their faith or help others keep their faith during the pandemic."

"So we are getting wonderful letters, pictures, poems, stories, flash drives with lots of videos and video interviews,” Fisher said.

After the ceremonies, a fried-chicken luncheon at the church will be held, featuring special keepsakes and surprises.

The time plate won't be opened for 50 years, coinciding with the church's 200th anniversary.

"Which we will all be there for," said Candy Barnette, with a laugh. "You can do a follow up."

Besides the Nov. 7th ceremonies, other related activities include a salute to the saints of the church in worship services on Halloween, Sunday, Oct. 31.

On Sunday, Nov. 14, a worship cafe and traditional services will be held at usual times. At 4 p.m., church members will reconvene at Andrew's Memorial Chapel, 1899 San Mateo Drive, for an hour of music and and some stories about First Presbyterian's past.

Eric Houghton, a longtime member of the church who is well-versed in its history, said many mayors and city commissioners have been affiliated strongly with the church, which has 200 to 250 members.

"It's older than the city of Dunedin by about 25 years. So it's Dunedin; it's Dunedin's people. It's a spiritual beacon — a wonderful place to come home to," Houghton said.

Figuring prominently in the church's history, Brown was originally from Virginia, Houghton said.

He was a chaplain during the American Civil War. He came to Florida as missionary after the war and went to Suwannee.

"Just a tiny little settlement. He tried to found a church there. They had yellow fever. His wife died. And it didn't look good," Houghton said.

Brown evidently took a sailing vessel to the Dunedin area, landing at a dock March 30, 1868, as a missionary Presbyterian minister.

"To the wiles of unsettled Florida … He had tough time," Houghton said.

He stared with 11 people — in 1871. There was no money, but a lot of heat and humidity. People paid him with tomatoes that were wilted.

"It was really a hard time," he said.

Brown told his lawyer in Richmond that he need a wife, asking, what do you got? Houghton said.

"He said, 'I got my daughter.' So the lawyer transported his daughter down here, and she married Mr. Brown. She always called him Mr. Brown in public," Houghton said.

Brown was quite the dresser.

"He was kind of a rock star Presbyterian minister of the 1860s," Houghton said.

Eventually, he had a nervous breakdown or other disorder.

"He had just worn himself," Houghton said, adding that Brown retired to Texas to live with his sister.

"So Mr. Brown was quite the guy," Houghton said.

During its long history at different locations, the church has served its members, the community and people in need in many ways.

Eventually, a new sanctuary was built in downtown Dunedin at the corner of Scotland Street and Highland Avenue in 1888. The building — the Andrews Memorial Chapel — was given to Dunedin Historical Society in 1970 and moved to Hammock Park.

A new sanctuary on Highland Avenue was built in 1926, in the Mediterranean Revival style. It was the gift of L.B. and Mary Skinner. The congregation changed the name of the church to First Presbyterian Church.

According information provided by Houghton, First Presbyterian sponsored its first refugee family in 1970s, settling the Vietnamese father, mother, daughter and son in an apartment at 1028 Bass Blvd.

The second refugee family arrived in Dunedin in 1978, coming from Laos.

The father and mother had two daughters and a third child was born in Dunedin. They arrived from a refugee camp with everything they owned in a battered suitcase tied with a rope.

The father got in trouble with authorities for selling chickens and escaped by hiking through forests until they found a safe place. They had no idea how to use a toilet.

The church helped other refugee families in ensuing years.

•1982: A new Reuter pipe organ was installed in the sanctuary with 19 ranks, 1,224 pipes and a set of chimes. Total cost of the organ and necessary renovations to accommodate it was $120,000.

• In April 2016, Shelor was named senior pastor. Barnette commended him for his involvement in the community and outreach effort.

Shelor credits the congregations of the church, said to be the oldest in Dunedin, for its achievements.

"I think it’s this church's historic and ongoing commitment to this community is what it really comes down to," he said.