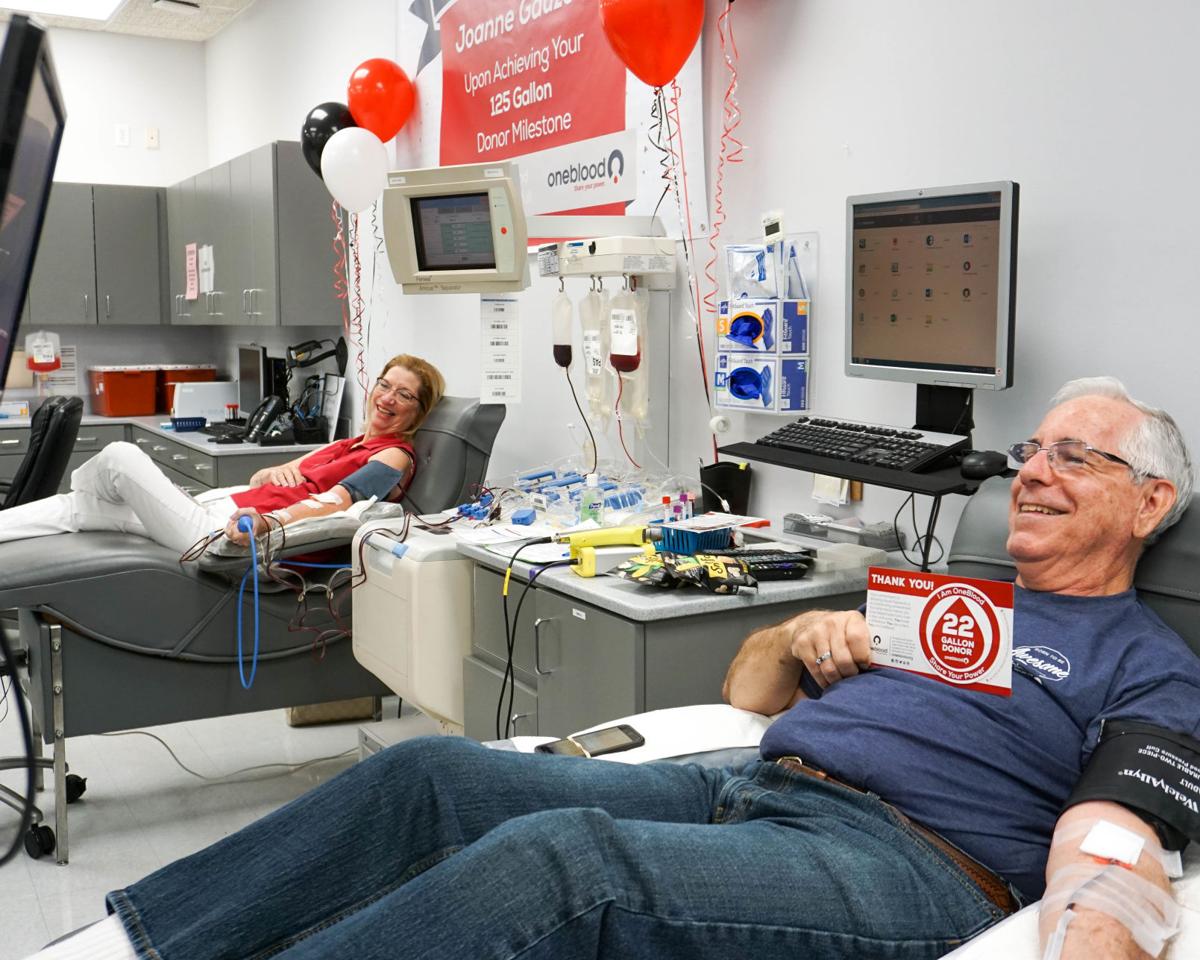 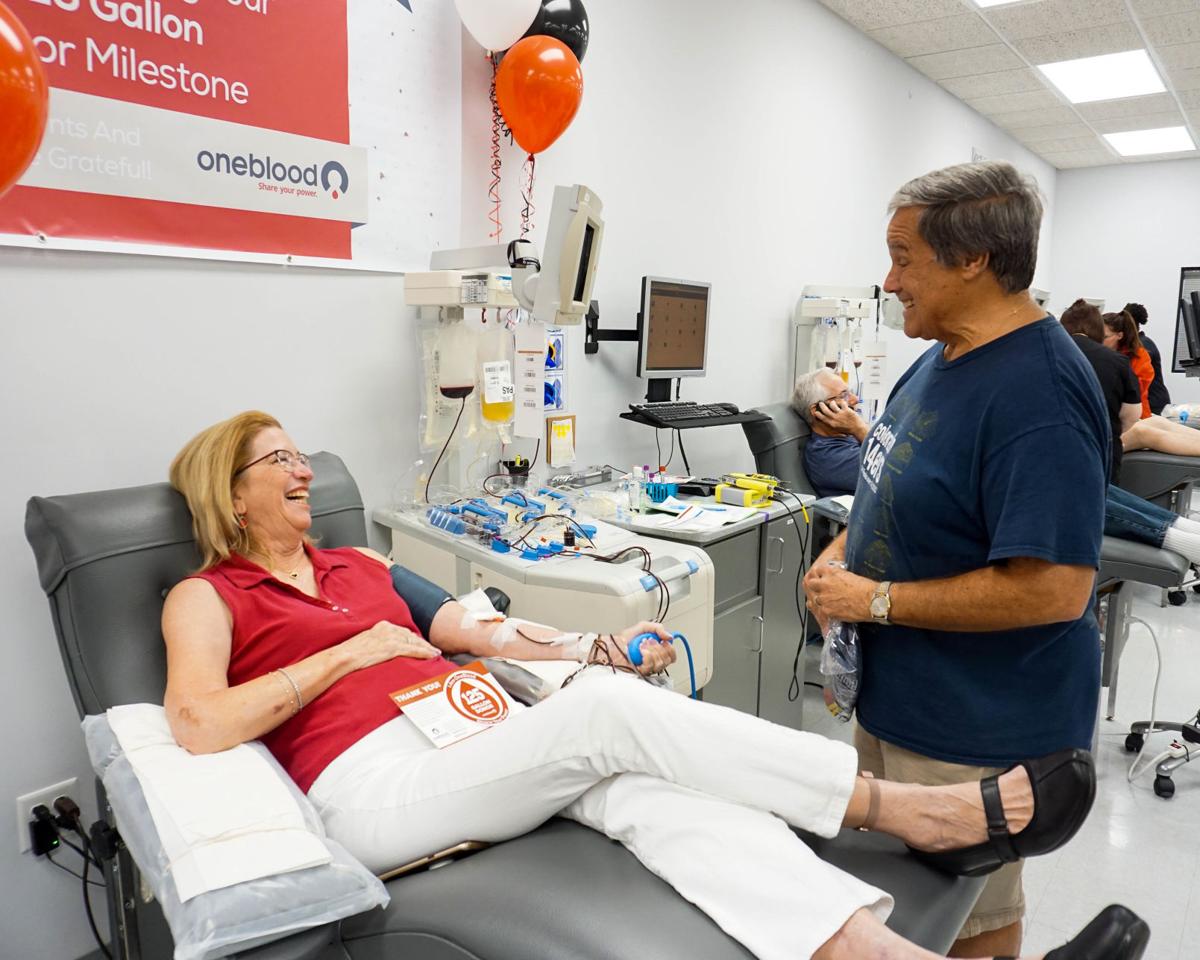 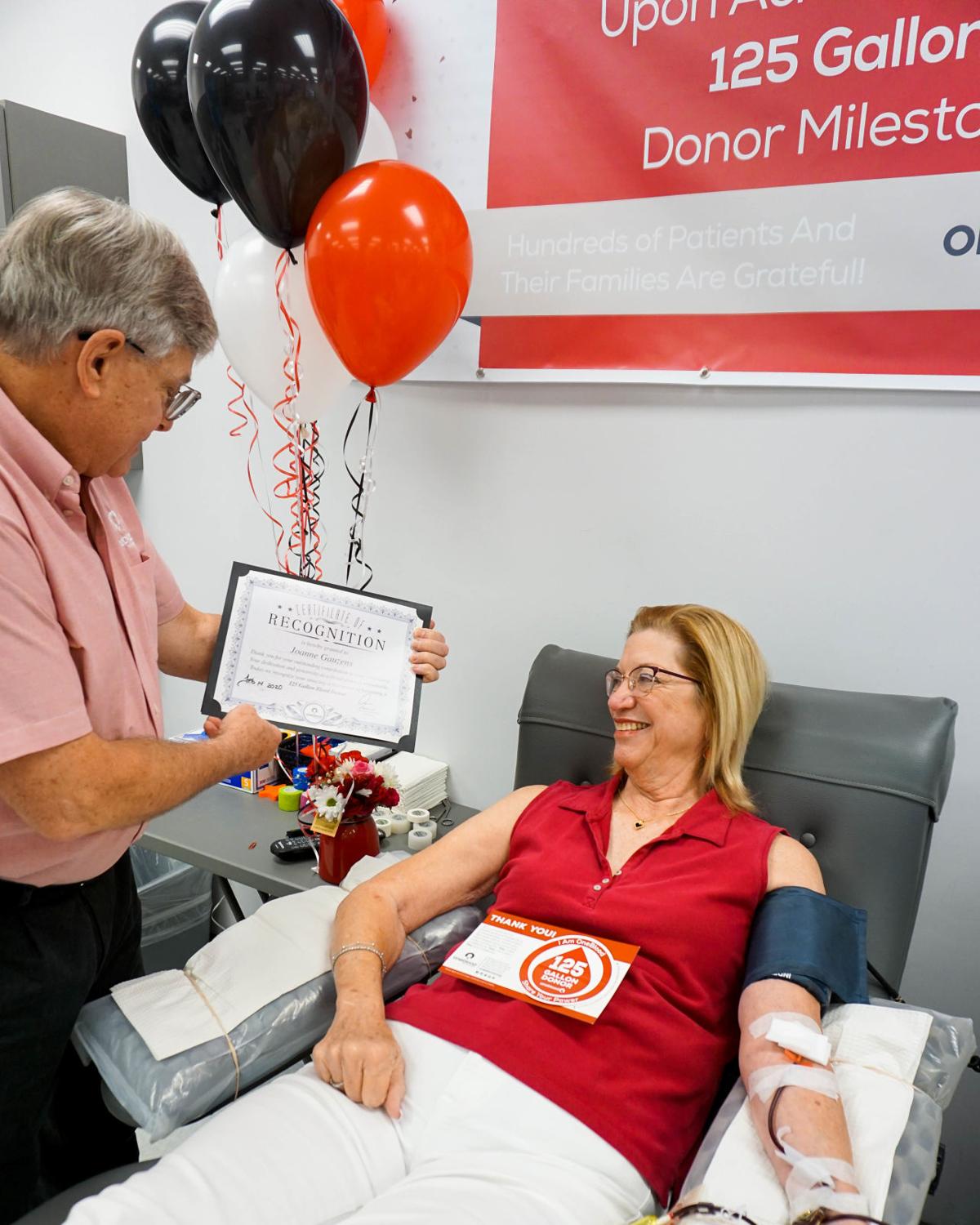 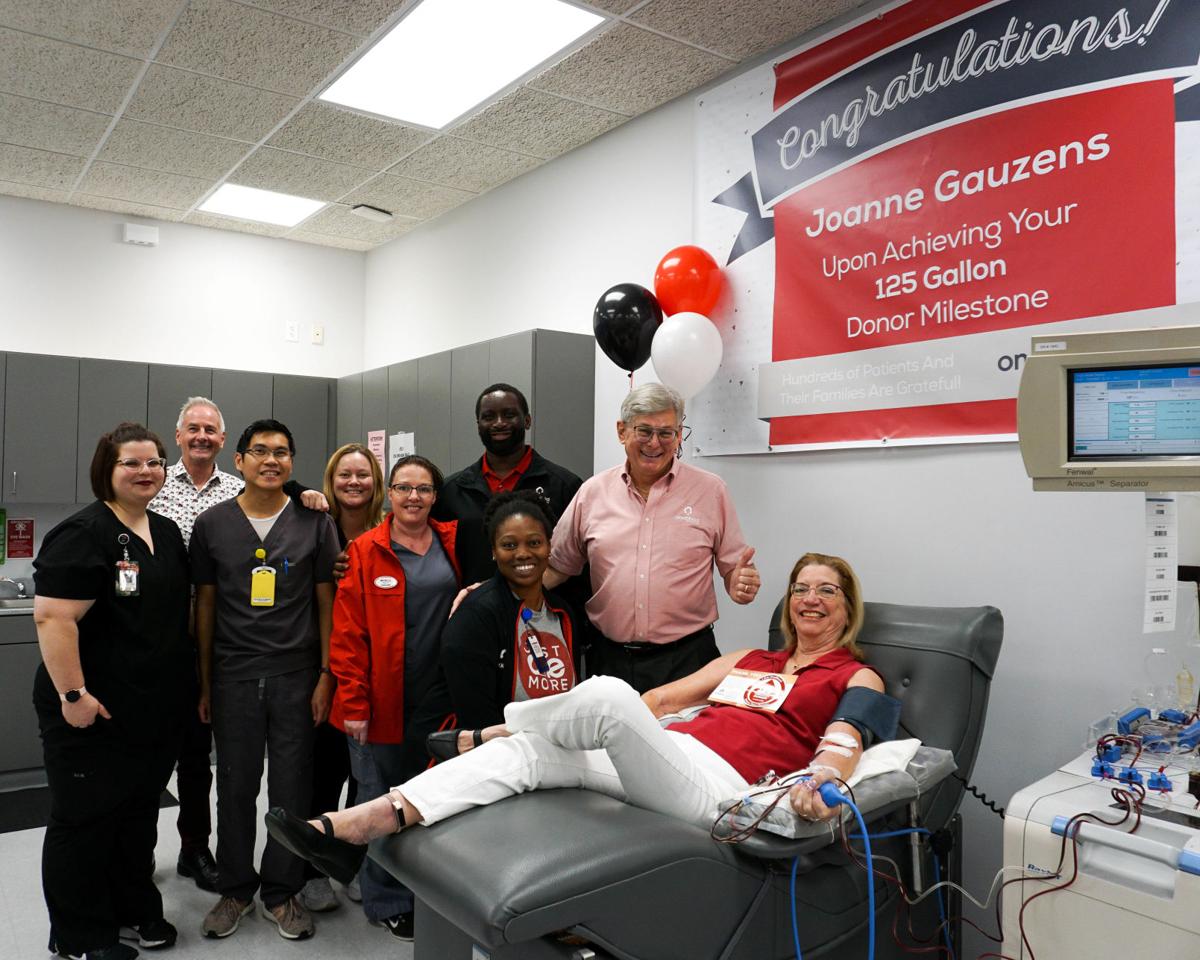 PALM HARBOR — When Alan Gauzens asked his then-girlfriend, Joanne, if she wanted to donate blood in support of their Miami church in 1977, she agreed — on the condition her future husband hold her hand the whole time.

More than 40 years, and many gallons, later, the couple are still donating blood together, though the setting has switched from hard tables in the church’s school hall to the comfy chairs and high-tech equipment at OneBlood’s Palm Harbor donor center, making the act of holding hands while donating impossible.

“It’s OK. I can do it without holding his hand now!” Joanne Gauzens joked.

And while they have been there hundreds of times before, this Valentine’s Day visit had special meaning, as Joanne Gauzens reached the 125-gallon milestone, a feat accomplished by only a handful of women in OneBlood’s history, according to officials.

“It’s unbelievable that I have done that much,” the 66-year-old Dunedin resident said before being hooked up to the machine that would extract her milestone platelet donation. “I remember when I did my 100th gallon, it was on 11/11/11. We had a 100-gallon party and my whole family was there. For this one, my son is coming on his lunch break, but my other three kids live away from home. So, it’s not as big of a deal. But it still amazes me when I think about it. One hundred and twenty-five gallons is a lot of blood!”

“There’s less than a dozen women who have donated 125 gallons in OneBlood’s history, and in my 30-plus years here I’ve personally met roughly 30 100-plus-gallon donors,” Eberts said. “Historically there’s been more men donors than women, so many more men reached 100-plus-gallon milestone. But that’s changed over the years, in large part due to people like Joanne. She’s part of a dedicated core of donors who form the backbone of our blood supply.”

Now strapped to a machine that was extracting whole blood from her left arm, separating and collecting the valuable platelets critical in helping cancer patients, while returning plasma, red blood cells and fluids to her body, Gauzens explained how she learned about the importance of giving back at an early age.

“My mom always ingrained in me that you have to volunteer and help others, and giving blood was the easiest way to do it,” she said, adding, “my sister died two weeks after being diagnosed with leukemia in 1966, and they didn’t have anything like this then. So, now we all do it.”

As he reclined in his chair covered by a blanket, Alan Gauzens, who has donated 22 gallons, reflected on his wife’s milestone.

“I think it’s fabulous … because she took the time while running the house, raising our children and working,” he said. “One hundred and twenty-five gallons is amazing, but it starts with one. Don’t look back and say, ‘I wish I could’ve done something.’ Do it.”

While Joanne prepared to watch a movie to pass the time during the roughly two-hour procedure, she said she doesn’t really think about the hundreds of lives she has saved through her donations.

“I don’t even think about it at that level,” she said, noting she recently had an emotional meeting with a nurse who thanked her for helping extend her dying husband’s life. “They say each gallon is made up of 8 units and each unit affects three people, so if I gave 125 gallons … I don’t know, I was never good at math! But I think it would fill this room. And I don’t think I’d be able to handle that.”

The gregarious Gauzens, who works at Pinellas Technical College-Clearwater, also admitted she was hesitant about all the attention surrounding her milestone donation. “I don’t want the accolades,” she said. “But then I think, maybe it will inspire somebody.”

As if on cue, a fellow donor slowly walked up and respectfully asked to shake Gauzens’ hand, which she bashfully accepted.

“I just wanted to come over and say congratulations, thank you and it’s an honor to meet you,” Palm Harbor resident Mark Welsh, a 53-gallon donor, said. “You are an inspiration. I think you’re amazing.”

“I’m not amazing,” a slightly embarrassed Gauzens shot back. “I’m just me.”

“Well, you’re amazing to me,” Welsh said, adding, “Anyone who donates 125 gallons is saving lives.”

To which Gauzens replied, “Anyone who donates 1 gallon is saving lives.”

According to OneBlood, generally, healthy people age 16 or older who weigh at least 110 pounds can donate blood. All donors receive a wellness checkup including blood pressure, temperature, iron count, pulse and cholesterol screening, plus a surprise gift.