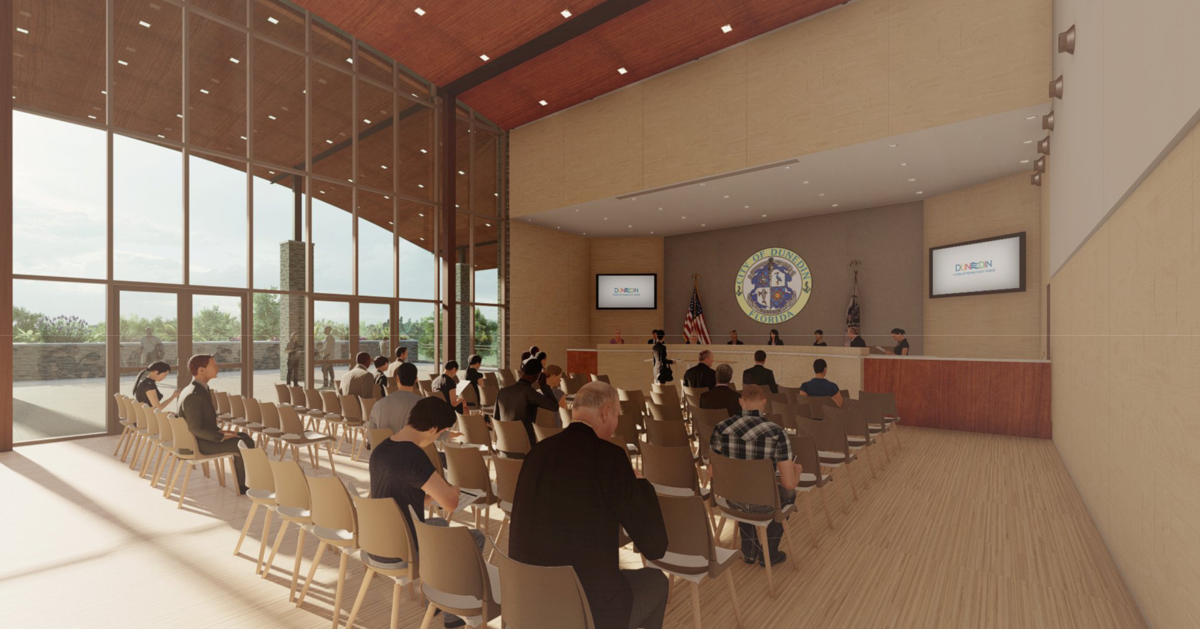 Shown is design of the new commission chambers, which is expected to have seating for 112 attendees. The lobby will be able to accommodate 96 seats. 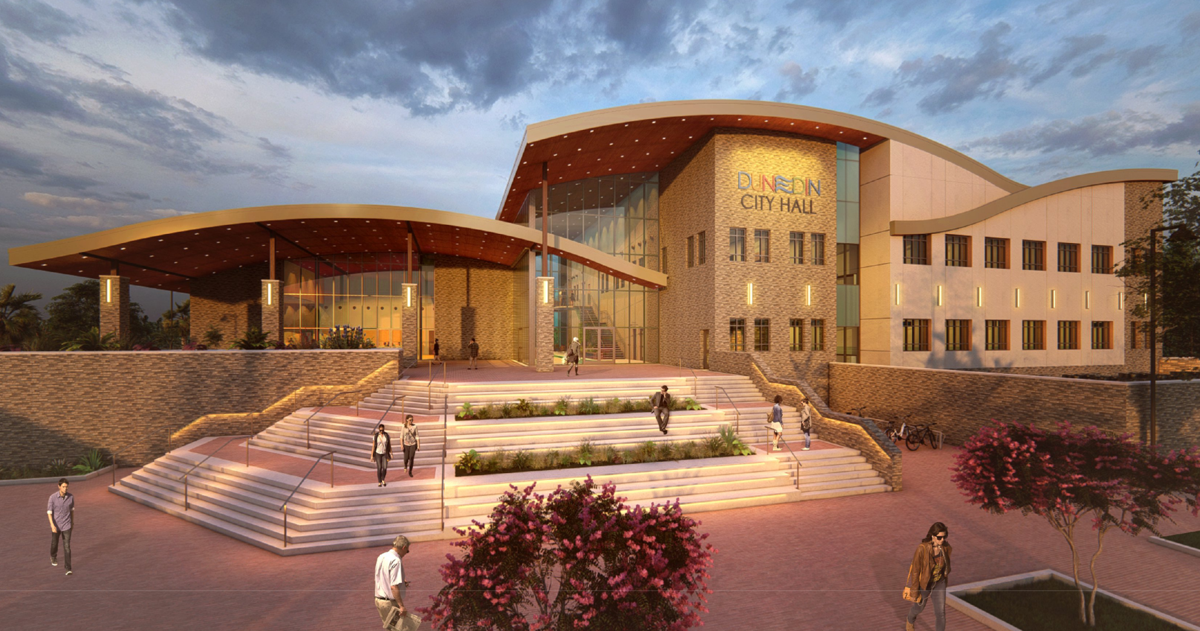 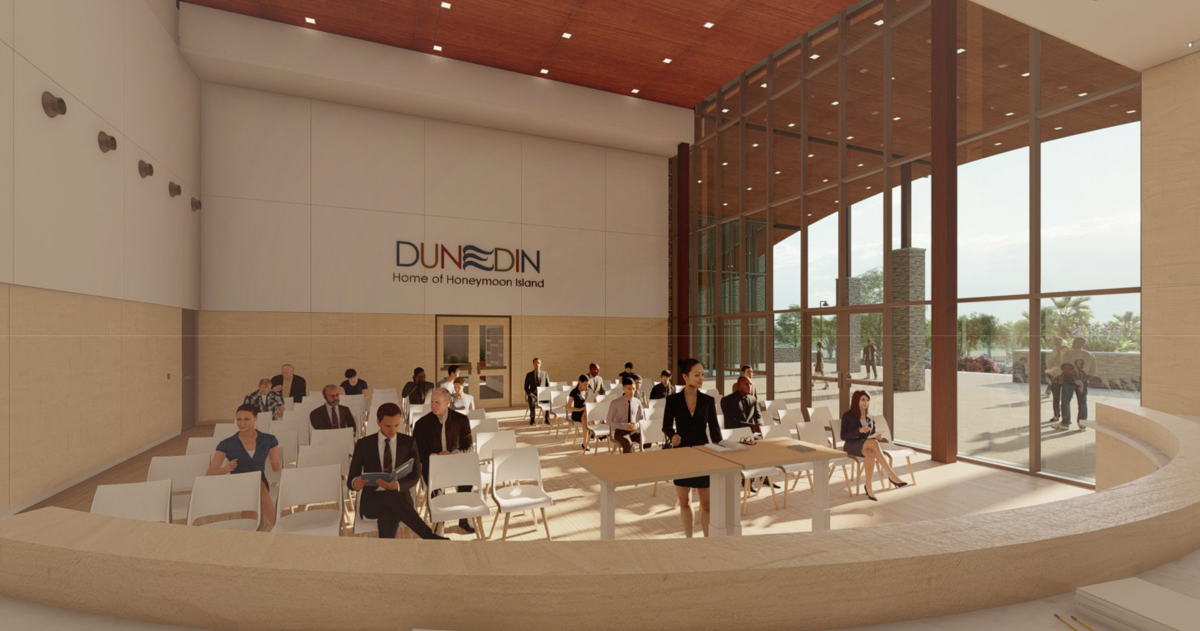 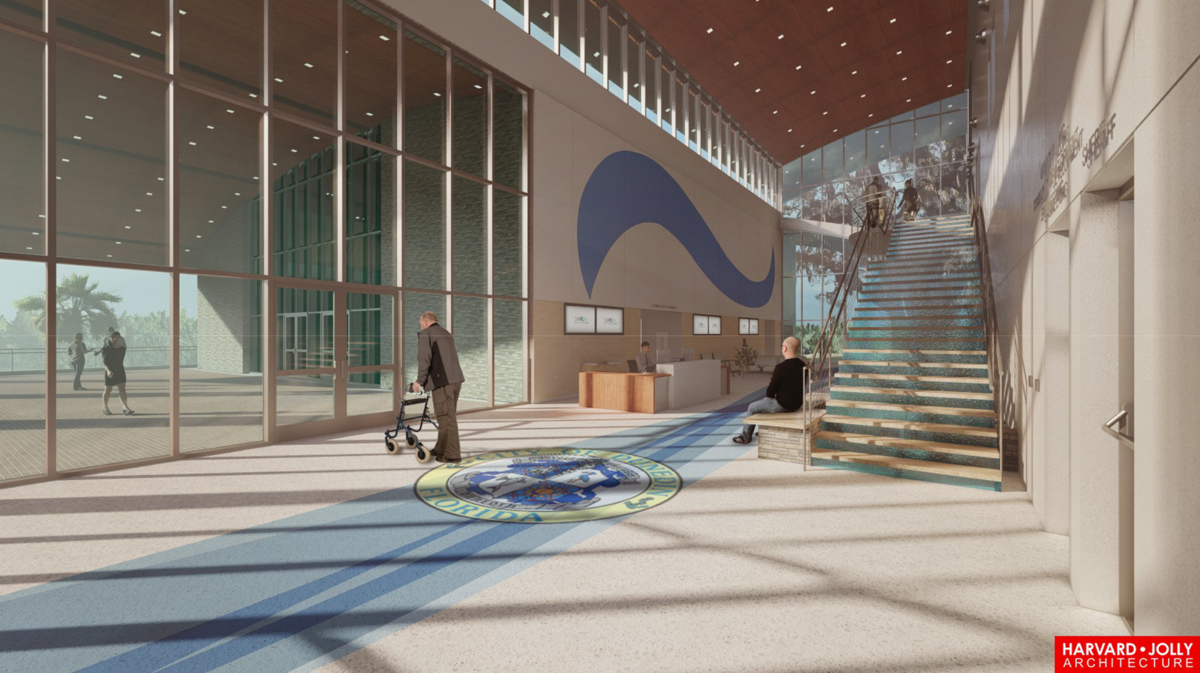 Shown is design of the new commission chambers, which is expected to have seating for 112 attendees. The lobby will be able to accommodate 96 seats.

DUNEDIN — City officials are moving forward with plans to make their proposed $22 million city hall project shovel-ready despite uncertainty over funding and other issues related to the coronavirus.

City commissioners voted 4-1 on July 21, with Commissioner Heather Gracy opposed, to authorize staff to proceed with construction document preparation. The design of the building is essentially complete, and they expect to seeks bids toward the end of the year.

Commissioners expressed concern about the possibility of a decrease in sales tax proceeds, but at the end of a more than three-hour discussion that evening looked to staff to come up with ways to augment the sales tax revenue.

“We are concerned about the money,” Mayor Julie Ward Bujalski said. “Tell us how we can finance this. You said we can afford it in this way, but are there other ways that we can also afford it that doesn't put so much strain on one fund.”

City Manager Jennifer Bramley said commissioners had valid points regarding the financing of the project.

“There is always more than one way to skin a cat, and once we have the hard bid in hand and understand how much this building is going to cost, I think we can certainly do that,” Bramley said.

In memos, city officials explained the benefits of having a shovel-ready project, such as the possibility of obtaining grants.

They also said the city’s investment team thinks interest rates will remain favorable for borrowing through the end of this year with a slight increase in rates projected in 2021. City officials say construction costs are expected to remain stable through the end of the year.

With the construction of the proposed city hall, three aging structures are expected to be consolidated into one central location and yield meaningful savings.

At various times during the July 21 discussion, commissioners stressed the importance of having an efficient air-conditioning system.

Commissioner Moe Freaney said she reached out to professionals in the construction business who said building costs are coming down. They emphasized that city officials should challenge mechanical engineers to look at the air flow system.

The City Finance Board thinks the continuation of the design phase is not warranted with the little officials know about the future, said London Bates, a member of the board.

"It is unlikely we will be going back to the life that existed before the pandemic," she said.

City officials have established through their architects, Harvard Jolly of St. Petersburg, that the improvements they need to make to the building to address the pandemic need to occur, Bramley said.

"And we need to push our architects as hard as we can, challenge them to the extent of their abilities, to ensure the building is safe for our visitors and for ourselves," she said.

Residents are not getting timely city service in certain areas because of the coronavirus, Bujalski said.

Staff can't let the public into the city's building on Pinehurst Road because of the need for social distancing, she said.

"Do we leave them (staff) in the building, and do we add the length of time for our residents to access the services that they need in a timely fashion, because it's not happening now, and do we drag that out while we may be asking for a revenue enhancement? I don't think so," Bujalski said.

Freaney noted that city officials have already torn two buildings down and that they already have a design for the new complex at a significant cost.

"The third building that's going to be replaced … it’s a disgrace," Freaney said. "We had obsolete buildings 20 years ago."

The dollars for the project, from the Penny for Pinellas sales tax, have already been allocated, she said, and can only be used for projects.

"I think it's a tough call. Life is a risk. I think the bigger risk is to wait," Freaney said.

The project was delayed to make way for other buildings that are more public facing, she said, such as the Dunedin Public Library, the Community Center and the Martin Luther King Center.

City officials also are looking at saving money by making reduced improvements to the parking lot adjacent to the municipal complex.

Up against a changing world

Commissioner Jeff Gow, as well as other commissioners, said he appreciated the comments from Bates and the Finance Board. But he agreed the project needs to move forward, even though he is concerned about the impact it will have on revenue such as sales tax proceeds.

"I agree that it does us a better service to take control of our own destiny, as best we can and knowing the interest rates are going to be lower. To be shovel-ready gives us a better opportunity to take advantage of that. And knowing we can go ahead and continue forward and we still have a no-go point we can take advantage of is really the safe line for me," Gow said.

Though she agreed that Dunedin needs to have a new city hall, Commissioner Deborah Kynes was concerned that only a handful of people addressed the commission that evening.

"What's going on? That bothers me because we have had a lot of interplay," she said.

She thinks it’s a hard time to make a decision in July and August because a lot of year-round residents are out of town.

"Really? We had five speakers and one Zoom-hand. Something's not right there," Kynes said.

She feels city commissioners haven't got the participation on the biggest project they will do for 75 to 100 years.

Bramley replied that city officials had meetings with residents of the neighborhoods when they started the project through boards and committees.

She knows commissioners heard from their constituents on the project, but she was not sure why people didn't avail themselves of the opportunity to speak that night.

Gracy said officials are up against a changing world.

"That's a very big deal for me," she said, "because I don't want to have to go back on a brand-new building and modify that."

Though architects might say they have such design issues under control, that doesn't give her confidence yet. She said she is reacting to a cross-section of residents who said it might be too much for them.

Though the project means much to her, Gracy said, she doesn't have the confidence she had year ago.

"Our funding streams are impacted, and the risks to me are too great," she said.

Bujalski said the leading priority for the use of the fourth Penny for Pinellas is the new city hall complex “given the long history of how we got here.”

“We already know we need this. We all admitted that this is important and necessary," Bujalski said.

Over the years, attendees at commission meetings at City Hall sometimes had to watch the meetings from outside of the building because of the lack of space.

City officials and architects have addressed the issue of overflow crowds through its seating inside and outside of the commission chambers in the proposed City Hall.

Harvard Jolly Architects Vice President Amy Weber says the new commission chambers has 112 seats and also has capacity in the lobby for an additional 96 seats. That does not include room for 140 attendees out on the plaza. The current City Hall chambers and lobby seats 99 attendees.

The seats in the new commission chambers will be movable and can be placed in a storage room.

"I think not having fixed seating is going to really make that a multipurpose room and probably better for the public as well," Bramley said.

The largest city committee seats nine so the dais can accommodate that number.

Architects are doing sun studies, addressing tinting and conducting other work to ensure there isn't too much glare from windows.

"You might want to make the elevator larger so you can get a certain amount on there that are going to be able to social distance," Kynes said.

"Whose office are we getting rid of to fix this elevator?" Bujalski replied, chuckling.