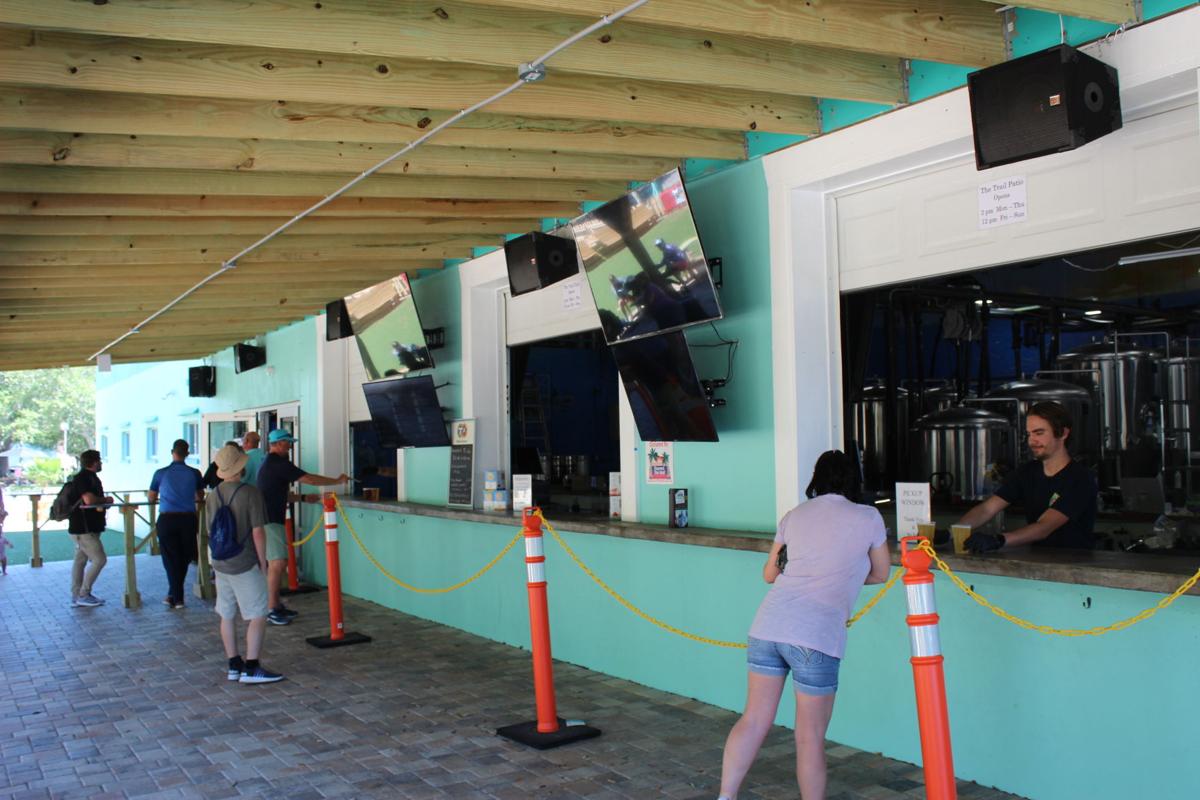 The House of Beer Brewing Co. began to get customers as soon as it opened around 3 p.m. May 19. 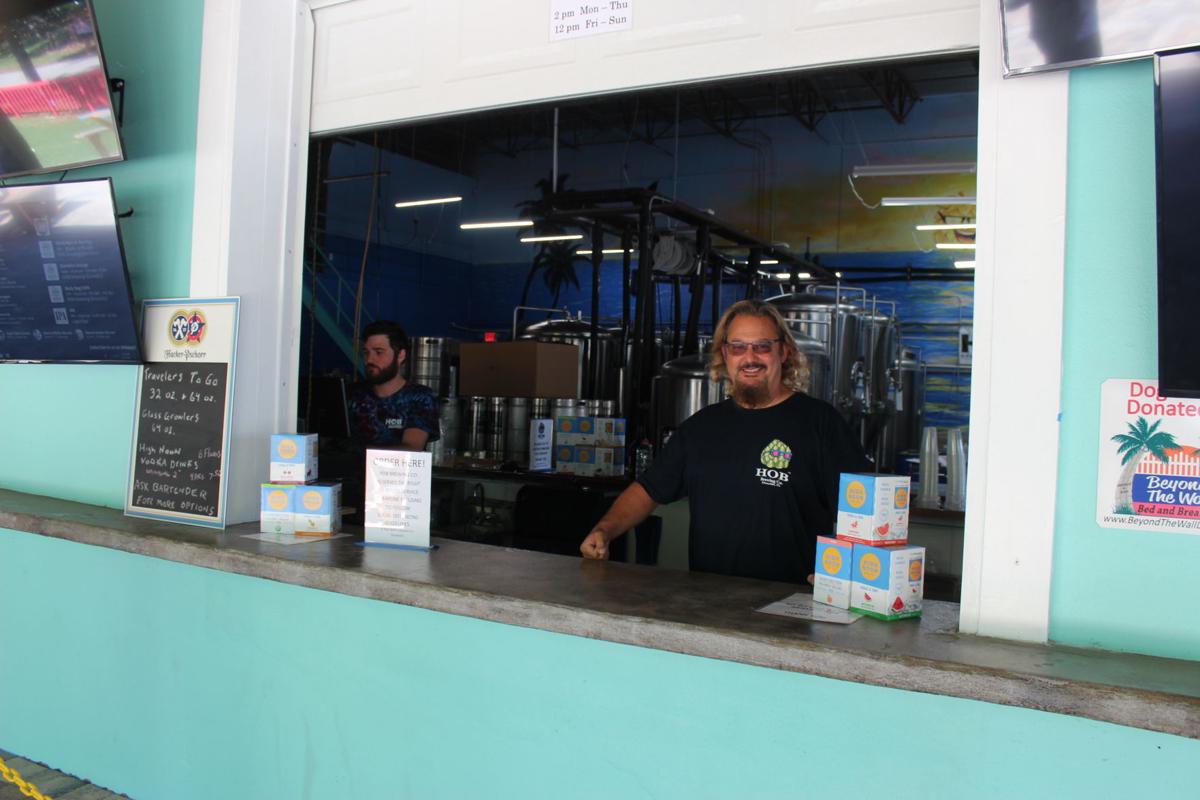 Rick Clemo, manager of the Dunedin House of Beer, says the community has been rallying behind the brewery’s efforts to reopen.

The House of Beer Brewing Co. began to get customers as soon as it opened around 3 p.m. May 19.

Rick Clemo, manager of the Dunedin House of Beer, says the community has been rallying behind the brewery’s efforts to reopen.

DUNEDIN — Kevin Erlandson walked into the outdoor porch of the House of Beer Brewing Co. on May 19 at about 3 p.m. and applauded.

The Trinity resident was elated the brewery was allowed to serve beer on premises within hours of getting the OK from county officials to reopen.

Other customers started walking into the porch area and soon sipped craft brew as they sat at picnic tables.

Rick Clemo, Dunedin House of Beer manager, was glad to learn the Florida Department of Business and Professional Regulation determined that breweries are allowed to operate as long as a food truck is associated with it or it has a restaurant and outdoor seating.

“I’m cautiously excited,” Clemo said. “We still have the coronavirus out there. And I still want to maintain safety at all costs, of course.”

Several days ago, HOB co-owner Andy Polce had complained in an interview with WFLA News Channel 8 about not being allowed to serve beer on the HOB porch while restaurants can on theirs. What a difference a few days can make. Now the beer is flowing.

“I’m pretty excited that we are able to start this journey of getting back to work,” Clemo said. “Obviously, it’s hurt everybody. It’s been tough on the whole planet. Some people have been able to find ways to survive. Some haven’t. We are just trying to help those, our employees, to get back to work and make money again, and the town certainly has been rallying behind us.”

Because the House of Beer Brewing Co.’s porch fronts the Pinellas Trail, it attracts a lot of pedestrians wanting to relax, sip beer and patronize food trucks.

“The obvious first one that’s going to benefit is the food trucks because from what I understand anybody who has a licensed food truck, their phone is ringing off the hook because the breweries want to have them there,” he said.

The Cueni Brewing Co. at 945 Huntley Ave. reopened May 21 for patrons who want to eat and drink on the premises, said Bren Cueni, co-owner of the business with her husband, Jon.

The brewery was closed for two weeks in the beginning of the pandemic, but reopened for to-go sales. Having food trucks is typical for Cueni since it’s had a food truck on site for the entire time it provided to-go service.

“We are happy to be open. It’s tough on a small business to be closed,” she said.

Cueni said that the brewery takes precautions, such as cleaning high-touch areas every 30 minutes.

“We are asking all of our customers to wear masks when they are not drinking. All of our staff is wearing masks the entire shift,” she said.

They want everyone to be safe.

“That’s going to be the toughest thing. There is going to be some rules that may last a long time,” she said.

Cueni and the HOB Brewery Co. are situated in the heart of an area affectionately known as “The Beermuda Triangle.” She acknowledged there is a camaraderie among the many breweries and tap houses in the area.

“We are friendly. Some of us are closer than others. We always help each other out if we need supplies. Whether it be brewing supplies like hops or grains or different things like that,” Cueni said.

The brewers meet monthly as a group through the Downtown Dunedin Merchants Association and participate together in activities, she said.

Clemo credited Mayor Julie Ward Bujalski for her efforts to help House of Beer and other breweries reopen, saying he spent more than an hour talking and texting with her.

“I cannot say enough wonderful things about our mayor, Julie Ward Bujalski. She’s been working with us on this particular project,” he said.

At the City Commission meeting May 5, Bujalski said that craft beer establishments have expressed frustration because they weren’t allowed to open yet. Same goes for bars and similar establishments that don’t serve food.

The bars and breweries are itching to get back to business, Bujalski said.

“The frustration is, most of them have porches and they feel that it is no different to be on their porch consuming something, whether it’s food or drink,” she said.

Meanwhile, Erlandson, who was born in Dunedin, said the House of Beer operators are good friends of his, and he has seen how the pandemic is affecting their business.

“Obviously, they have done everything they can as a business to keep afloat. But this is definitely a brewery as far as the outdoor area where people can come and sit. It was a big investment for them. So to be able to reopen and have people out here and help sustain and pay their taxes is a wonderful thing,” Erlandson said.

So he’s happy for the House of Beer crew.

“Because we know, just sitting out here, how much safer it is than walking into Walmart,” he said.