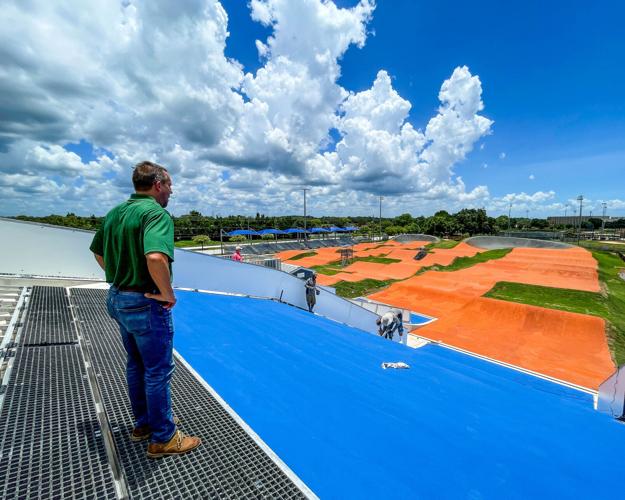 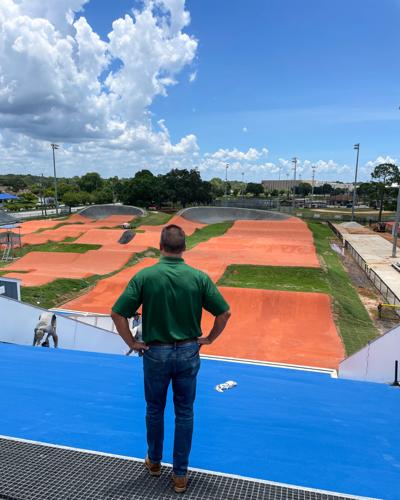 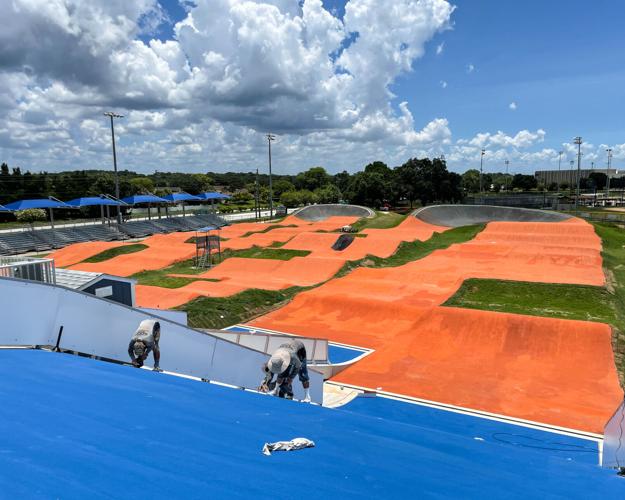 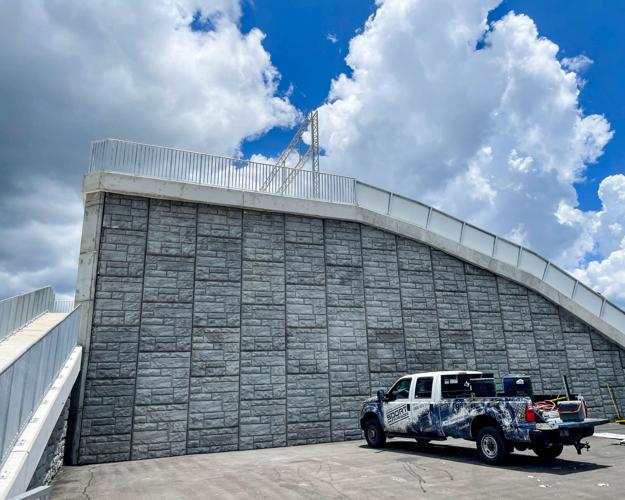 J. Kokolakis Contracting utilized large, highway-overpass style concrete squares to form the foundation of the Oldsmar BMX Supercross track’s starting hills, replacing the smaller, garden-style blocks that failed to provide adequate support for the tons of dirt that make up the 5-and 8-meter hills. 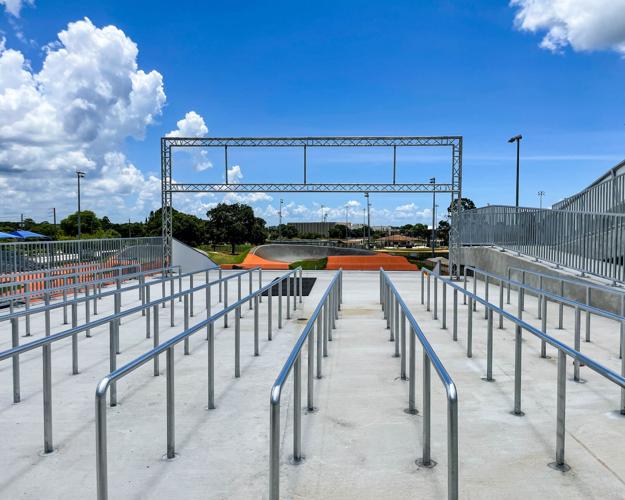 The rebuild of the track’s starting hills also allowed for some other smaller but important changes to the Oldsmar BMX Supercross track, including making access to the starting hills and starting gates easier for riders. 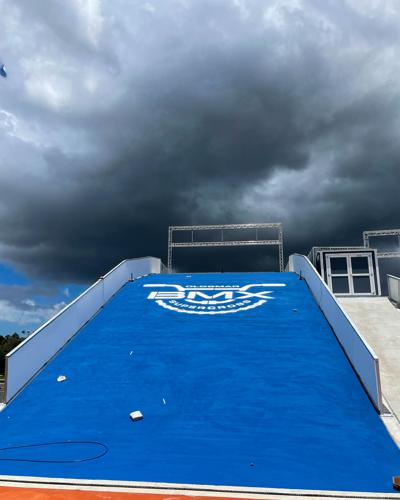 A new Oldsmar BMX logo designed by in-house photographer and graphic artist Mark McGinley adorns the 8-meter starting hill and will be sold on merchandise. 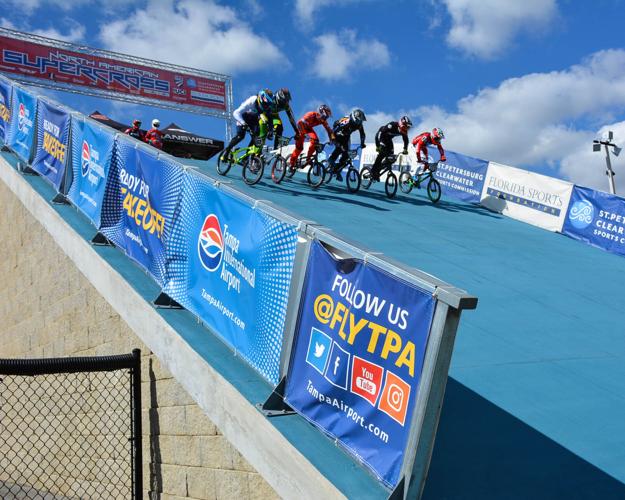 Riders descend the 8-meter starting hill at the Oldsmar BMX Supercross track during the 2018 Gator Nationals, one of the last races held at the facility before it was closed in 2019 after being deemed structurally unsafe. 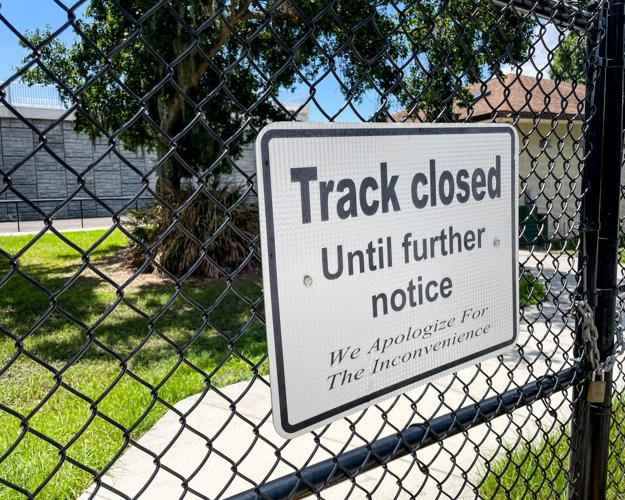 After three years and roughly $3 million in repair costs, the Oldsmar BMX Supercross track is scheduled to reopen on Friday, July 15.

The rebuild of the track’s starting hills also allowed for some other smaller but important changes to the Oldsmar BMX Supercross track, including making access to the starting hills and starting gates easier for riders.

A new Oldsmar BMX logo designed by in-house photographer and graphic artist Mark McGinley adorns the 8-meter starting hill and will be sold on merchandise.

After three years and roughly $3 million in repair costs, the Oldsmar BMX Supercross track is scheduled to reopen on Friday, July 15.

OLDSMAR — After three years and a $3 million rebuild of the twin starting hills, Oldsmar’s BMX Supercross track is scheduled to reopen with a 6 p.m. ceremony Friday, July 15.

The free event is open to the public and is scheduled to feature a ribbon-cutting led by Mayor Dan Saracki, followed by a ceremonial City Council ride, an open house, a two-hour open run for the public and a local pro-am race. Free hot dogs and drinks will also be provided, according to officials.

In the weeks leading up to the ceremony, anticipation of the cycling track’s reopening has been high among city officials and residents. The event marks the culmination of a long and bumpy road filled with construction and COVID delays and questions of whether it was worthwhile to rebuild the track after cracks started to form in the 5- and 8-meter starting hills, leading to the facility’s closure in 2019.

But according to Saracki, the council’s decision to move forward with the rebuild was made with several factors in mind.

“The facility serves the community in so many ways,” Saracki said via email a few days before the reopening. “It is a vital component of Oldsmar’s diverse recreation offerings, promotes economic development and sports tourism and places Oldsmar on the international map.”

The track, in the Oldsmar Sports Complex at 4120 Tampa Road, has been a magnet for local and international BMX riders since the original facility was converted to a supercross track in 2015, hosting the annual Gator Nationals event as well as an Olympic qualifying competition during the leadup to the Rio Games in the summer of 2016. There are just a handful of Supercross tracks in the country, including one in Sarasota.

“There are 380 local BMX tracks in the United States, but tracks of this caliber, there are literally only a handful in the world,” USA BMX CEO John David said during the track’s first reopening ceremony in October 2015. “The way this was designed and constructed, you’re not going to find one that’s better in the world.”

Unfortunately, cracks began to appear in the hills’ retaining walls years later, forcing officials to close the facility in April 2019 and find out what was wrong.

Subsequent studies revealed improper construction practices and a lack of quality control, and the decision was made by the council in early 2021 to rebuild the hills following an emotional meeting where dozens of area BMX riders showed up to voice their support for the facility.

“When this item was originally discussed, I was not really in favor of it because of the amount of the investment,” then-Mayor Eric Seidel said during the January 2021meeting. “But I will tell you that my opinion on that has changed.”

Factoring in the economic impact the track has had on the area, which includes pumping an estimated $3.4 million into Pinellas County from the 2018 Gator Nationals, it’s easy to see why they decided to rebuild.

“I never even dreamed this would’ve happened to our city, that the track would be defective, and I’m truly disappointed,” former Saracki said. “But I love the BMX and I support the BMX very much. It’s a staple of our city. It brings revenue and it brings riders that love our city (and) it’s time that we move forward and get that track done.”

City Manager Felicia Donnelly, Leisure Services Director Chip Potts and the rest of Oldsmar’s leadership are amped for the first night of what they hope will be many more years of riding at the new Supercross track.

“We’re excited for the future, because it holds an abundance of learning, practicing and racing,” Donnelly said via email. “Local practicing and races begin on Thursday, July 21, and the city is honored to host three large events to kick off the reopening — the Gator Nationals on Oct. 7-9, the Sunshine State series in January 2023, and the Gator Nationals again in February 2023.”