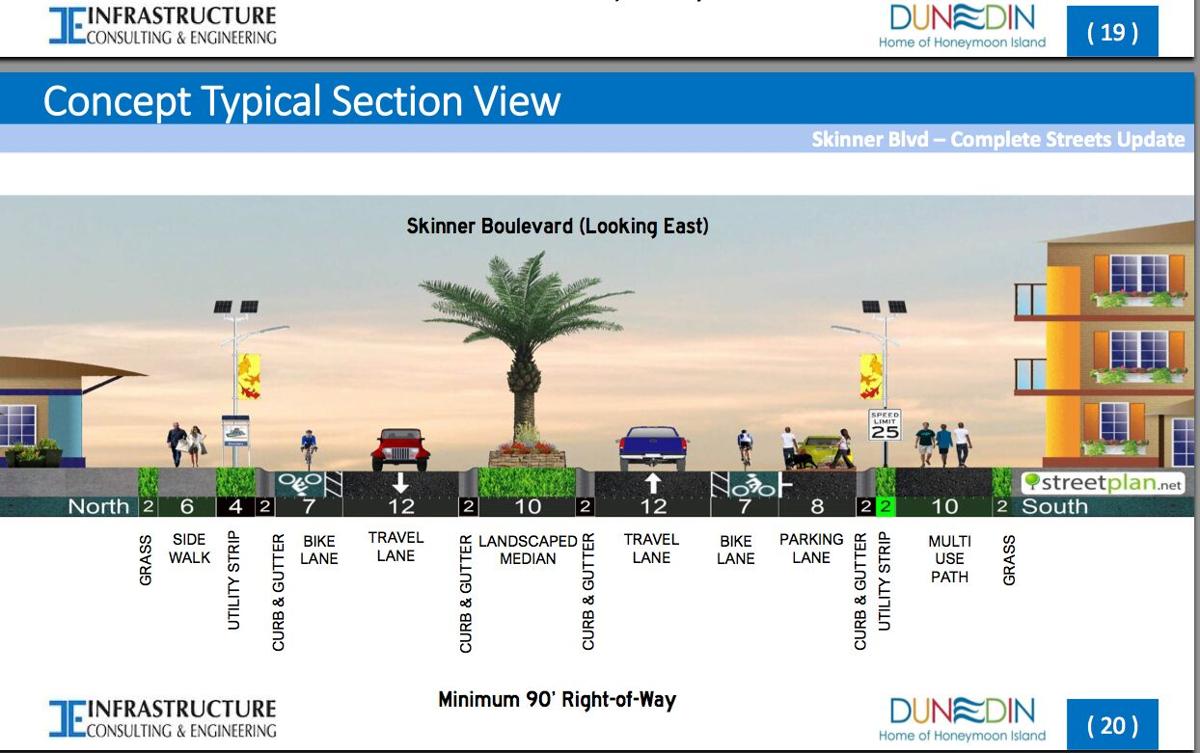 The proposed Skinner Boulevard project should be completed by the middle to the end of 2024. 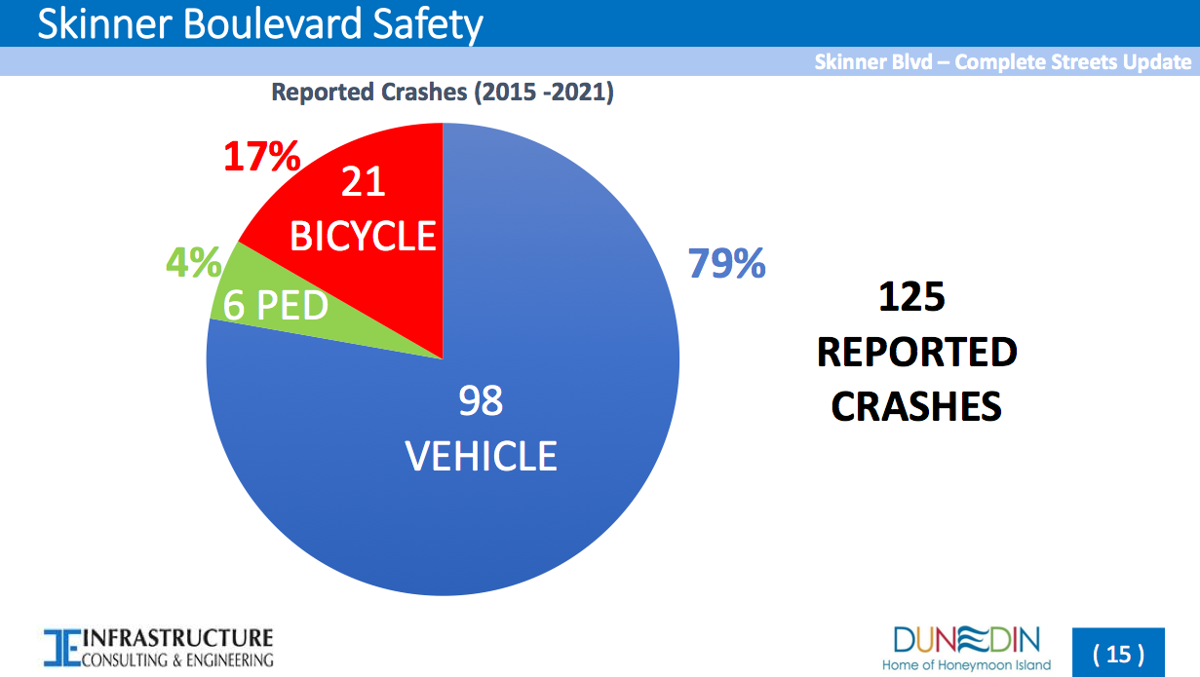 Plans to reduce traffic lanes along Skinner Boulevard from four to two are intended to decrease crashes.

The proposed Skinner Boulevard project should be completed by the middle to the end of 2024.

Plans to reduce traffic lanes along Skinner Boulevard from four to two are intended to decrease crashes.

DUNEDIN — In May, 15,000 people on the Pinellas Trail made the crossing at Skinner Boulevard.

Such statistics are among the reasons that Skinner Boulevard is slated to undergo extensive improvements.

Commissioners got an update on the project, which calls for roundabouts, reduction in vehicular lanes from four to two, landscaping, 7-foot bicycle lanes on both sides of the corridors, sidewalks and lower speed limits.

"The whole point of Skinner Boulevard going to two lanes divided is we want to reduce these crashes. We want to make it safer for the cyclists to cross over," Dabkowski said.

Florida Department of Transportation officials are expected to begin the design of the project in July 2022 and construction in 2023. As discussed Aug. 17, work should be completed by the middle to the end of 2024.

Design cost is expected to be about $1 million and funds will come from various sources, including community redevelopment fund proceeds, the Penny for Pinellas, Forward Pinellas and FDOT.

Chelsea Favero, a Forward Pinellas planning manager, said the project was added to the priority list for the Complete Streets Program.

Complete streets are intended to be designed, operated and maintained for all users, regardless of age or ability. The are expected to promote safety, quality of life and economic development.

"We have been working really hard on this the last couple of months with your staff and FDOT and we are excited to see this move forward," Favero said.

Dabkowski said there are five projects near Milwaukee Avenue that are going to impact Skinner Boulevard. Among those is the proposed 81-unit Artisan East Apartment Homes, part of the Gateway development. It is expected to generate 1,035 daily vehicle trips.

To accommodate the traffic in the area along Milwaukee Avenue, improvements call for a longer left turn lane than exists today on Skinner Boulevard.

"We feel very comfortable that that 400-foot turn lane will accommodate all future traffic, including the build out of Artisan east," Dabkowski said.

Also proposed is a 10-feet wide multi-use path to accommodate cyclists and walkers on the south side of Skinner Boulevard. The north side would have a six-feet wide sidewalk.

Plans call for roundabouts at Skinner and Douglas Avenue and Skinner and Highland Avenue. Also under consideration is reduction in the speed limits from 35 and 40 mph on Skinner to 25 mph.

Landscaping, art and other improvements to make the corridor more attractive are proposed. Currently, the corridor is "just a sea of asphalt," Dabkowski said.

Plans call for a raised grass medium anywhere from 10 feet to 16 feet wide with palm trees.

Turnoffs for buses also are proposed so that that the buses get out of the travel lanes.

Large public workshops were held years ago, Dabkowski said, drawing at least 40 people at each session, including city commissioners and FDOT and county officials.

Commissioner Deborah Kynes asked whether the multi-use trail along Skinner Boulevard, from the Pinellas Trail to Bass Boulevard, could be extended to the east.

"It very well may be in their vision that this multi-use path should go all the way to Belcher Road," he said.

Mayor Julie Ward Bujalski said she is glad that FDOT is handling the project's design phase as opposed to local agencies. Their oversight is expected to save steps in the process.

"It's so much more efficient," Bujalski said.