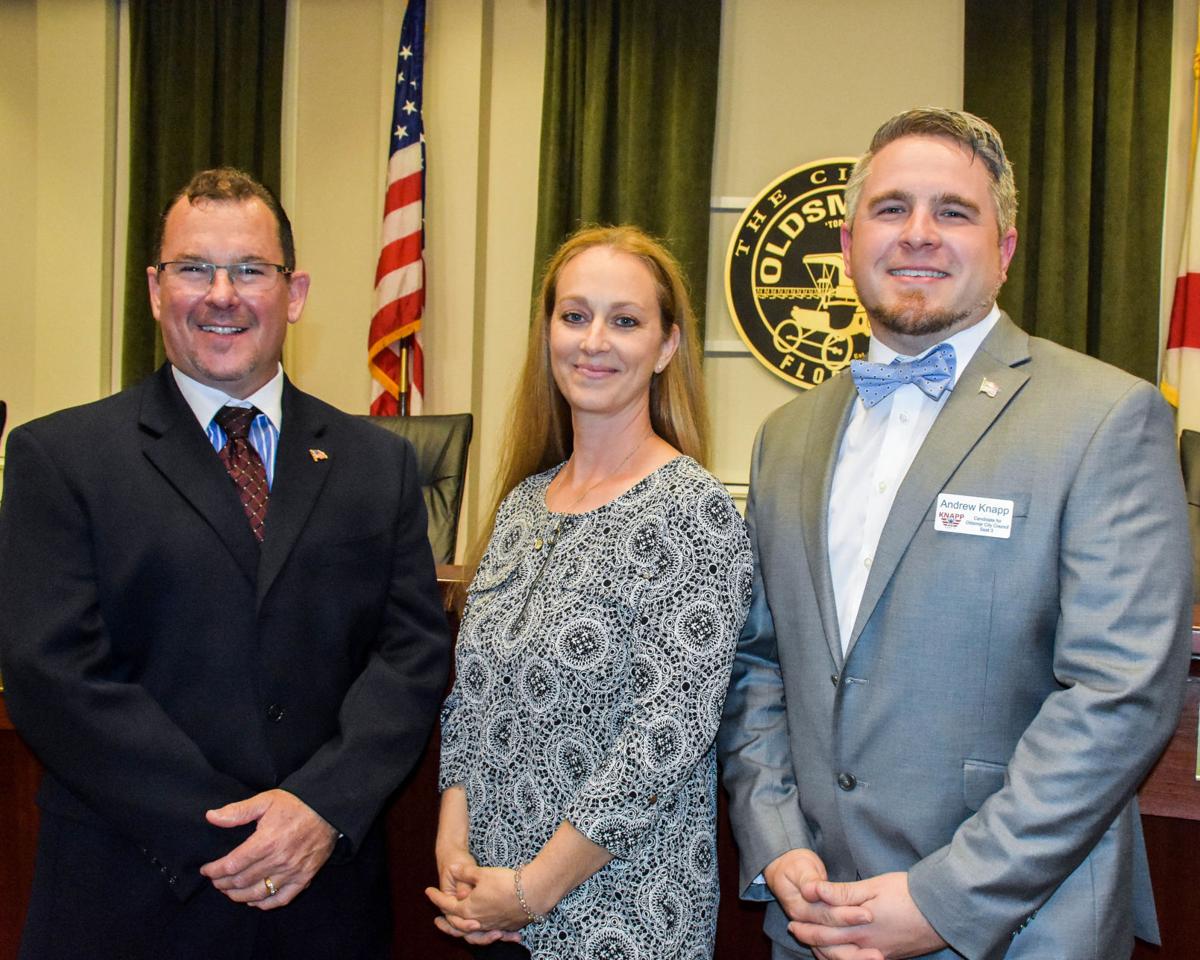 The three candidates vying to fill the vacant Seat 3 on the Oldsmar City Council, Chris Bohr, left, Kelly O’Brien and Andrew Knapp, took part in a voter forum on Jan. 14. 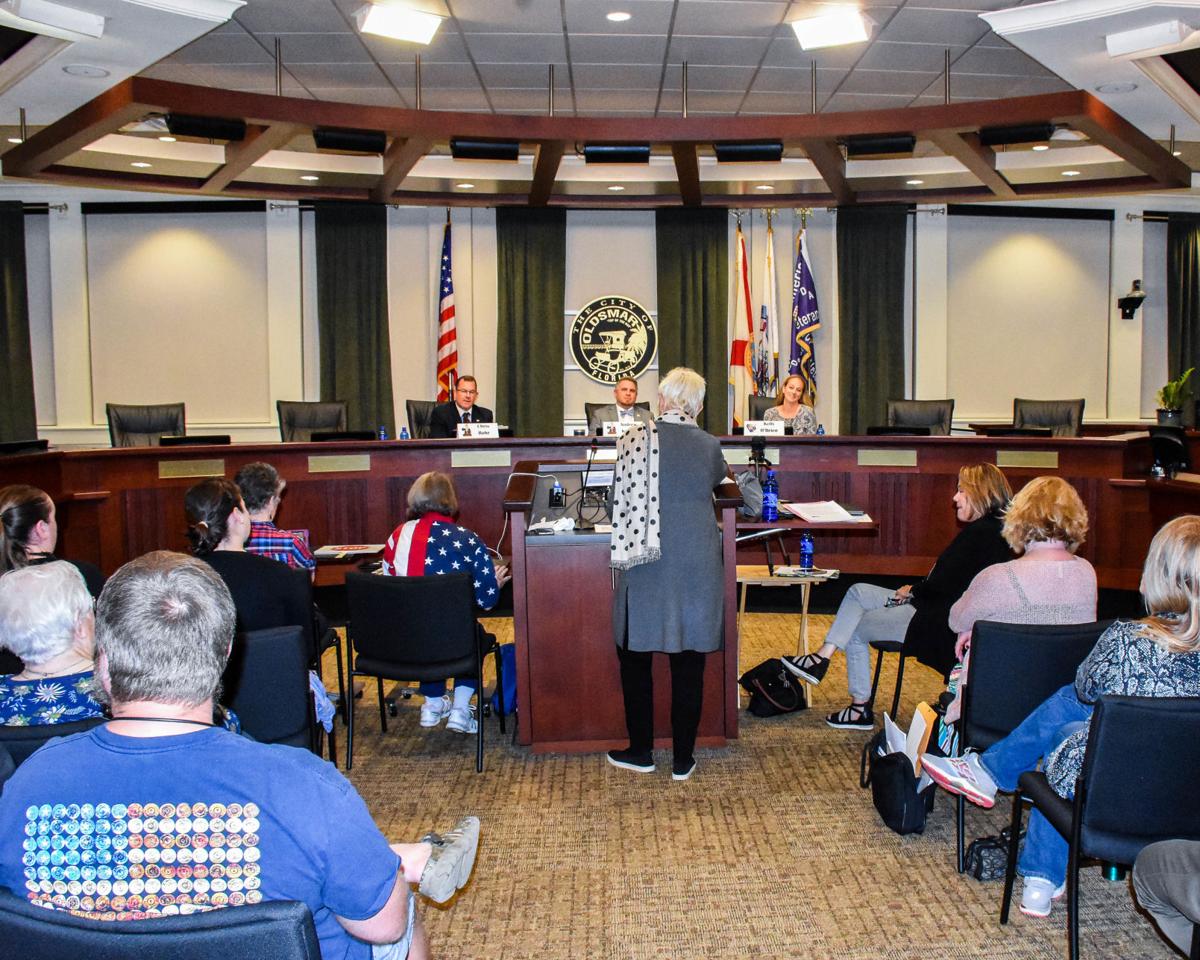 The Jan. 14 Oldsmar City Council candidate forum was sponsored by the League of Women Voters of North Pinellas.

The three candidates vying to fill the vacant Seat 3 on the Oldsmar City Council, Chris Bohr, left, Kelly O’Brien and Andrew Knapp, took part in a voter forum on Jan. 14.

The Jan. 14 Oldsmar City Council candidate forum was sponsored by the League of Women Voters of North Pinellas.

But based on the turnout for a candidate forum held on Jan. 14 in the Oldsmar Council Chambers, the special election scheduled for March 17 to fill former City Councilwoman Gabby McGee’s vacated Seat 3 could buck that trend.

Dozens of potential voters packed the room for the hourlong event staged by the League of Women Voters of North Pinellas County. The forum provided an opportunity to get to know the candidates, Chris Bohr, Andrew Knapp and Kelly O’Brien. The top vote-getter in the March 17 election will serve the remaining year of McGee’s term.

Pinellas cities are holding their elections on March 17, the same day as Florida’s presidential preference primary, to save cost for the county’s Supervisor of Elections Office.

McGee resigned from the City Council late last year because she was moving to Barcelona, Spain, to take a new position with her employer, technology company Cisco Systems.

In their opening remarks, the candidates quickly distinguished themselves from each another via their personalities, goals and reasons for running.

“I want a little bit more of the same,” Bohr, a 51-year-old realty agent and auctioneer, said regarding the development of the downtown district. “I’m on board for our downtown development, but I want to make sure our guys have what they need to make that happen.”

Bohr also noted he is the first “legacy” candidate in city history. His father, Don Bohr, who died in 2006, served two terms on City Council in the mid 2000s.

O’Brien, 48, is a doctor of psychology who, like Bohr, has no previous political experience.

But despite a busy work slate at her private practice and several other work and volunteer commitments, O’Brien said she was inspired to run for office by her young daughter, Fallon.

“I think all my jobs are really important, and I love them all,” she said. “But the most important job I have is being a mother … and that’s really why I’m running.”

While running on a “family focused” platform, O’Brien said she is not against the downtown development, but she is a big proponent of building a new cultural center. “I feel improving what we have is necessary,” she said.

Knapp, 34, who finished second in a three-way race for Seat 1 in 2018, grew up in Oldsmar. He has seen “a lot of change, mostly good, but I see the opportunity for more change,” Knapp said.

“Every day I am challenged with problem solving, and I think that skill set would translate well to giving some positive benefit to our city,” said Knapp, an engineer.

The questions posed by moderator Anne Decker covered the downtown development, potential zoning changes and the challenge of running for a one-year term, among other topics. A question related to sea level rise and climate change caught people’s attention.

Knapp said he was looking forward to the results of a recently approved study on the effects of climate change in Oldsmar and O’Brien said she had a lot to learn “but this is important because it effects everybody in here,” while Bohr took a different approach to the issue.

“Climate change is a moniker that is used to describe so many things when people can’t figure out what’s going on,” he said. “Do I buy into it? To a degree. Do I buy into the hysteria? Not at all.”

The difference in opinions and approaches to issues allowed attendees to get a good feel for the candidates.

“It absolutely helped me get to know them better because their personalities shined through,” Quyen Trujillo, another real estate professional, said afterwards. “I didn’t know who I was voting for coming in but based on this, it really helped me make my decision.”

“I came here specifically because I knew nothing about Kelly O’Brien or Chris Bohr, and I only knew a little about Andrew Knapp from his run for council last year,” Oldsmar resident Becky Afonso said.

“This event really helped me see where they are coming from and what their aspirations are for the city, and it definitely helped me form an opinion on who I want to vote for in March.”

To view a video of the 2020 Oldsmar Seat 3 candidate forum, visit the city’s website or YouTube page.