Renovations to Dunedin Stadium will be completed in time for the 2020 spring training season. Capacity will increase by 3,000 and there will be a new scoreboard, a boardwalk and a new Jays Shop, among other amenities. 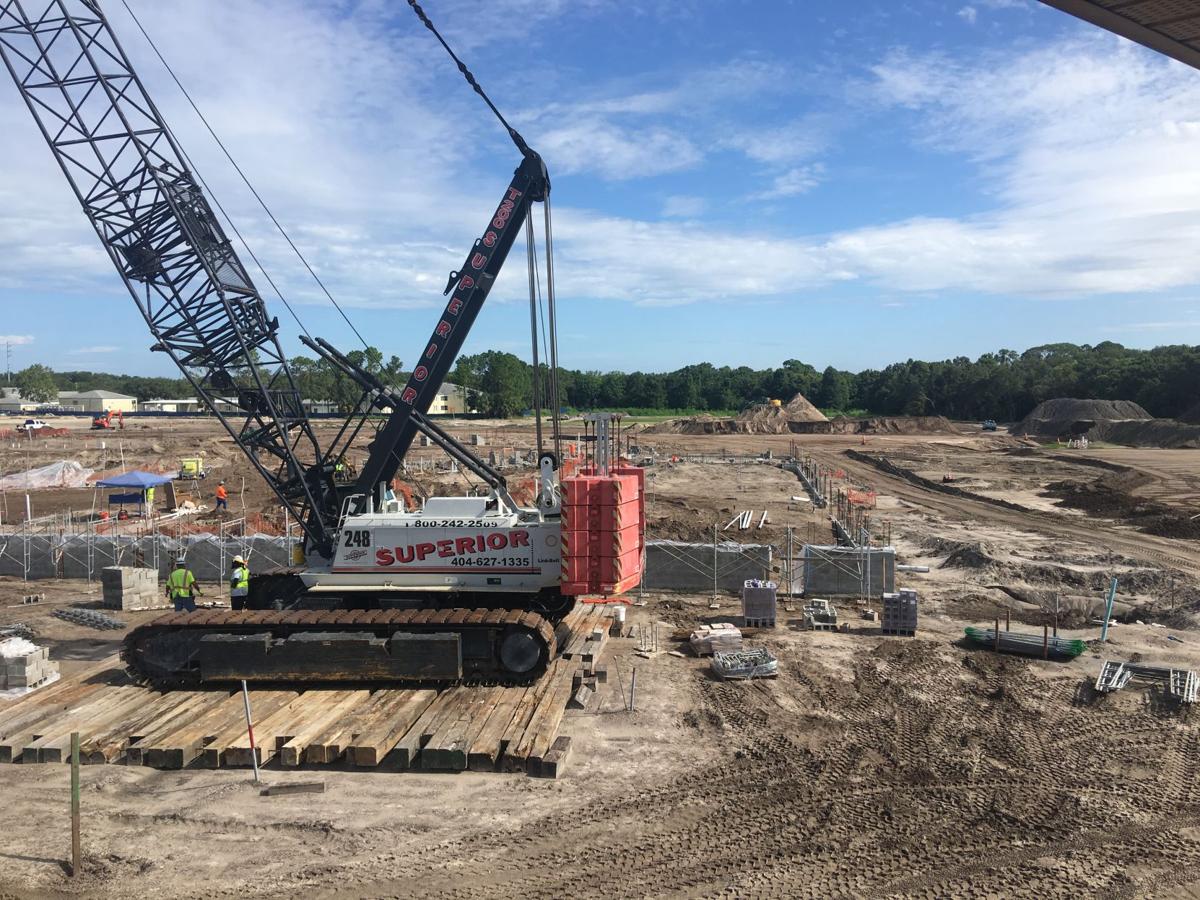 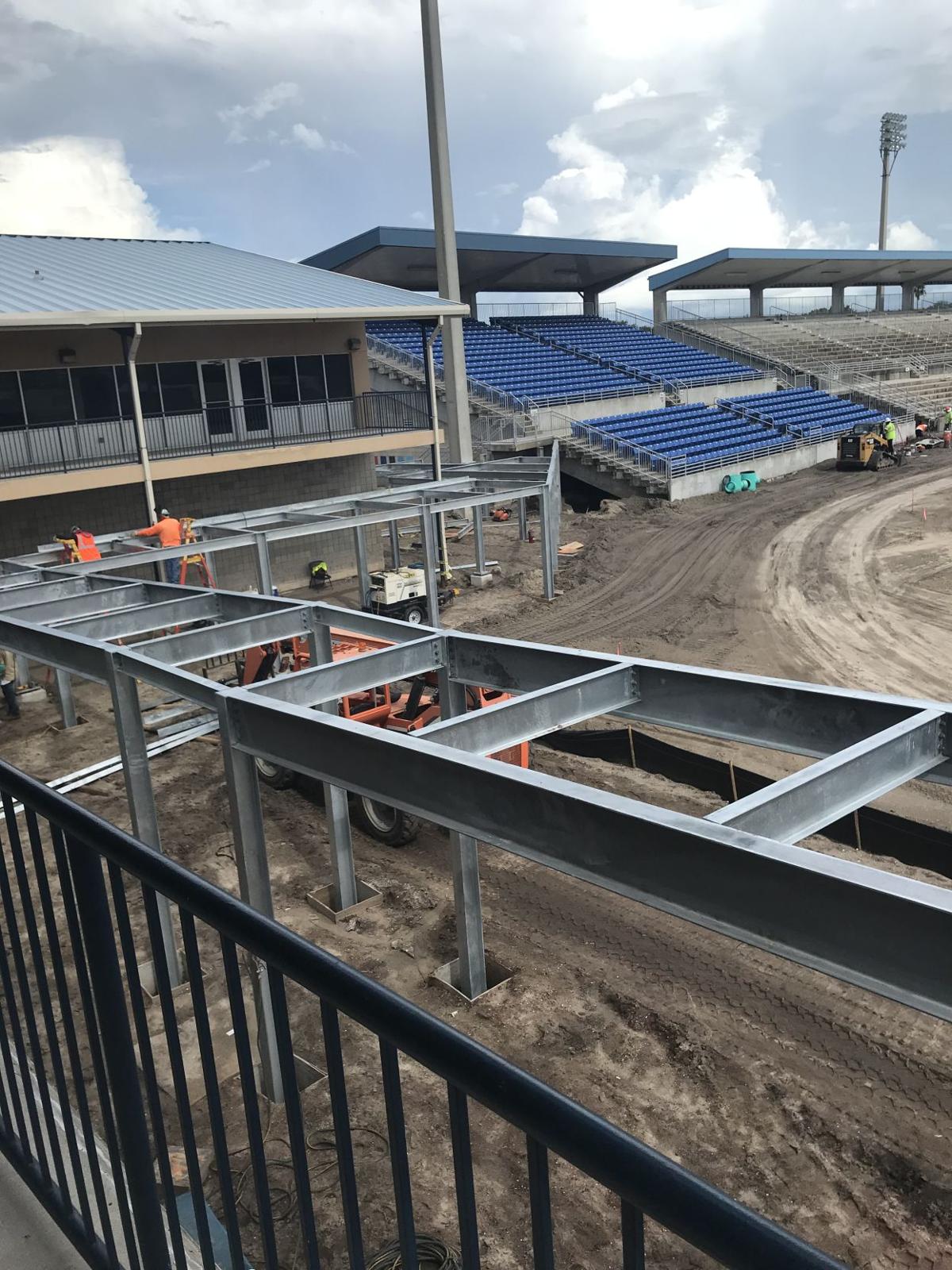 A new boardwalk will link each side of the stadium around the outfield to provide 360-degree fan circulation. 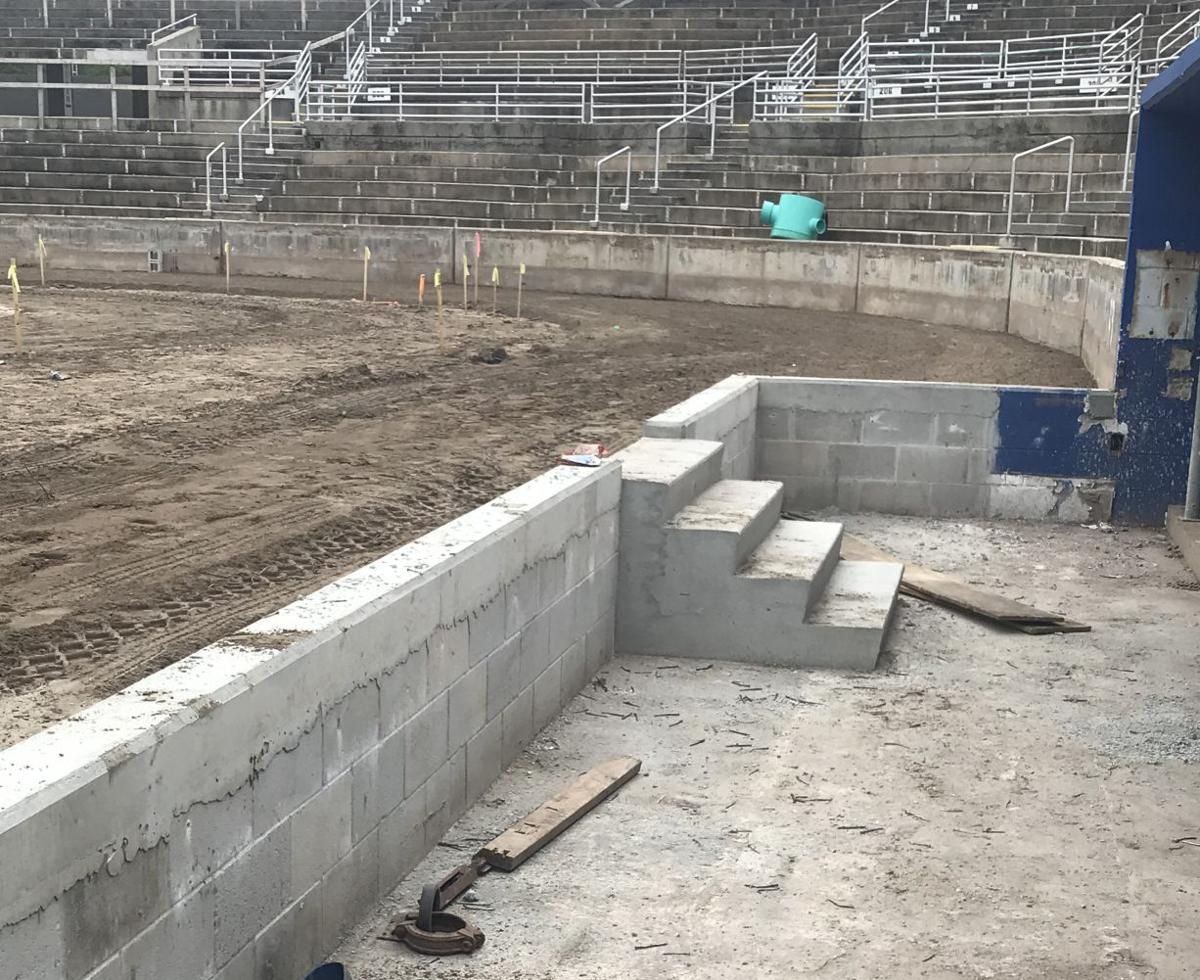 The cap and stairs to the visitors’ dugout takes shape as construction unfolds at Dunedin Stadium.

The Blue Jays Player Development Complex will be nearly three times the size of the existing training facility. It won’t be ready by spring training, but city officials said that shouldn’t be a problem, because the team can use the old clubhouse.

Renovations to Dunedin Stadium will be completed in time for the 2020 spring training season. Capacity will increase by 3,000 and there will be a new scoreboard, a boardwalk and a new Jays Shop, among other amenities.

A new boardwalk will link each side of the stadium around the outfield to provide 360-degree fan circulation.

The cap and stairs to the visitors’ dugout takes shape as construction unfolds at Dunedin Stadium.

The Blue Jays Player Development Complex will be nearly three times the size of the existing training facility. It won’t be ready by spring training, but city officials said that shouldn’t be a problem, because the team can use the old clubhouse.

DUNEDIN — Local fans of the Toronto Blue Jays and visitors from Canada have a lot to look forward to this spring.

It’s not only the presence of what a popular T-shirt north of the border bills as “The Blue Genes” — the sons of three of the best sluggers in major league baseball history who are now a part of the Jays’ everyday lineup.

In addition, the team will be playing in a stadium and training facility that have been renovated to the tune of $102 million, a project that has the team’s director of Florida operations “extremely excited” about the team’s future here.

“As I’m looking out my window, I see the boardwalk being constructed, the field is being re-leveled. … All in all, we’re extremely excited and our fans will really enjoy the amenities that are starting to take shape right now,” Shelby Nelson, the team’s Florida boss, said in a recent interview.

The project has grown significantly since the city entered into an agreement with the team in November 2017 to keep Toronto’s spring training and minor-league operations in Dunedin for the next 25 years.

The team has since upped its stake by another $20 million, and Dunedin is pitching in another $530,000, bringing the project’s bottom line to nearly $102 million, the biggest construction project in city history.

On Sept. 19, the City Council formally approved a guaranteed maximum price amendment with Gilbane Building Co., the construction manager. That amount is for $96.6 million, with roughly another $5 million going to architects, permitting costs and so on.

“The project is going well,” said Doug Hutchens, deputy city manager and Dunedin’s point man on the baseball project. “The stadium project is on schedule for completion in time for spring training next spring. We’re excited about that.”

The stadium at 373 Douglas Ave. may be on time, but the training facility, about 3 1/2 miles away on Solon Avenue, is running behind.

That’s because of the increased scope of work the team has committed to what it is calling the Blue Jays Player Development Complex. The new, two-story, 100,000-square-foot training and administrative complex will be nearly three times the size of the tired, overcrowded existing facility.

According to the team, the new complex will have a 10,000-square-foot weight room; eight locker rooms; two dining rooms and two training rooms; classrooms and large conference rooms; sports labs and “fuel bars”; a variable depth pool, plunge pools and a sauna.

Outdoors, there will be three new full ballfields, for a total of six; five-bay and seven-bay batting cages; two 10-pack gang mounds and a new half-field.

The training complex should be completed by summer, Hutchens said, adding that it is “not too problematic” being behind schedule because the new fields will be completed by spring training, and the team can still use the existing clubhouse. When the new facility is finished, the old clubhouse will revert to the city, which will repurpose it as a parks maintenance facility.

The stadium, meanwhile, will see capacity increased from 5,500 to 8,500 through additional seats, standing room and "party deck" viewing. Bathrooms, concessions and suites are being renovated. There will be a new scoreboard, Jays Shop, Jays Zone and BBQ Tent; an air-conditioned bar along the third base line and an outdoor bar in right field; and a boardwalk linking each side of the stadium around the outfield to provide 360-degree fan circulation.

The completion of the stadium means the minor-league Dunedin Blue Jays will play their 2020 season on its home field. Because of the construction, the team played this summer at Jack Russell Stadium, the old spring home of the Philadelphia Phillies.

Hutchens noted that Dunedin is on the hook for just a fraction of the cost of an operation that has a massive economic impact.

“Going into it, the city paid for an economic impact statement to demonstrate that those dollars are not just padding the wallets of millionaires or billion-dollar corporations. What it’s actually doing is providing an economic driver for the region,” he said. “This is a direct infusion to retain jobs and to ensure the economic impact that baseball has on tourism and the trickle-down effect to restaurants, hotels, gas stations and everything else benefits from that.

“The team has people who live here year-round, they’re a major employer in town, and they buy goods and services in this area,” Hutchens said. “This is, in essence, the U.S. headquarters for an international corporation, and we’re proud to have them. We think it’s going to be a great return on investment for the next 25 years.”

He said the Blue Jays made a “huge compromise” in agreeing to have separate stadium and training facilities, a relatively uncommon situation in the major leagues. Built-out Dunedin simply couldn’t assemble the land necessary for such a sprawling complex.

But Nelson, the head of the team’s Florida operations, said staying in Dunedin “was our full objective in the process.”

The Blue Jays are the only major-league team to have held court at the same spring training site for its entire existence. “We’re very proud of that,” said Nelson. “The Tigers and some other teams have been (at facilities) longer, but we’re very proud that this has been our only home and we know it’ll be our only home for many years to come.”

The Jays, poised to finished fourth in the five-team American League East division, now hope to summon some of the mojo that led to back-to-back World Series championships in the early 1990s.

The baseball world is watching: Among the players called up to the big-league roster this summer were Vladimir Guerrero Jr., whose father is in the MLB Hall of Fame; Cavan Biggio, son of Hall-of-Famer Craig Biggio; and Bo Bichette, whose dad Dante is in the top 250 all-time in every major hitting category.

“We were very spoiled and fortunate that they were all on our Dunedin Blue Jays team that won the (2017) Florida State League championship,” said Nelson. Club officials are counting on those pedigrees to help deliver big-league success.

“I really think the Blue Jays hope this new player development complex is going to be a facility where they can train young ballplayers to win championships,” said Hutchens.