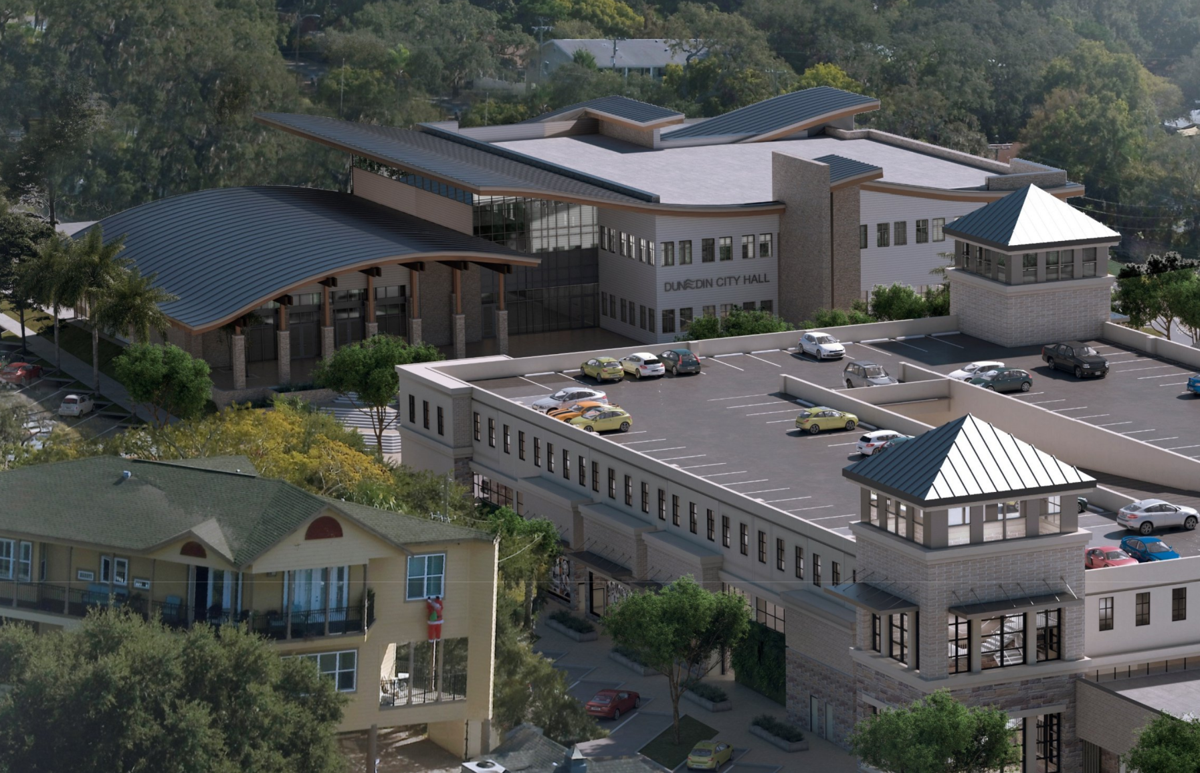 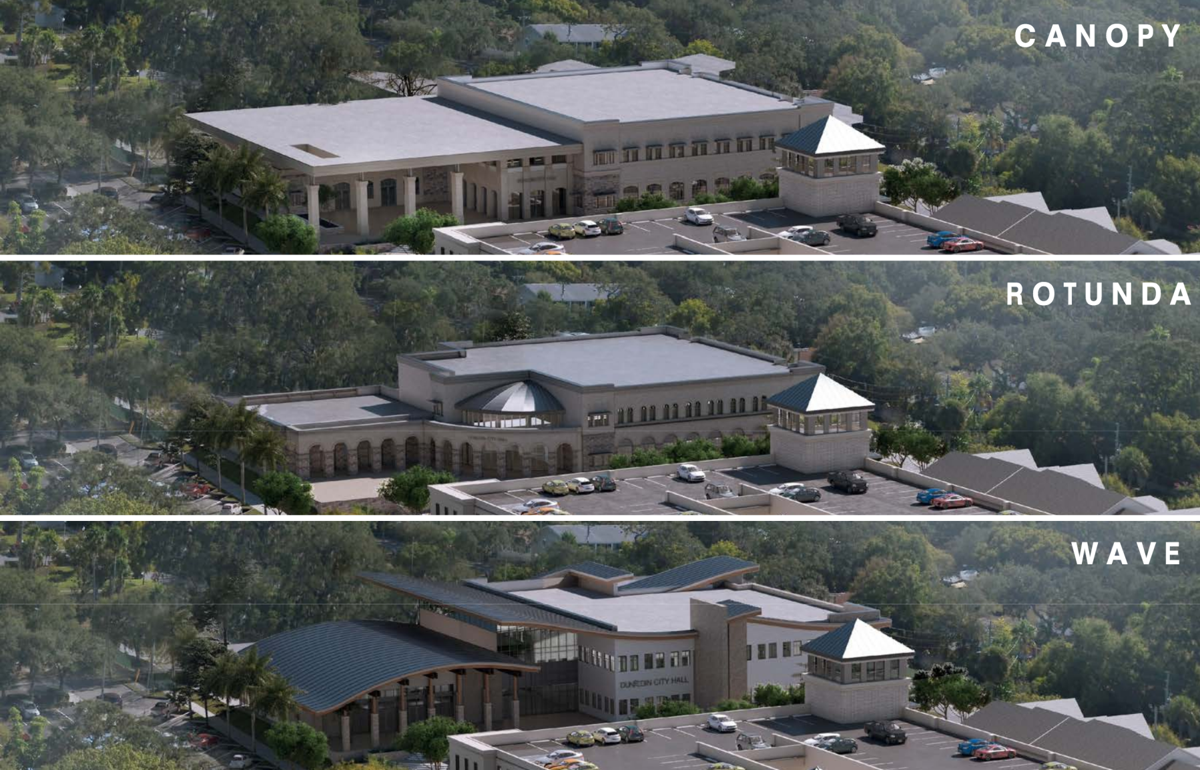 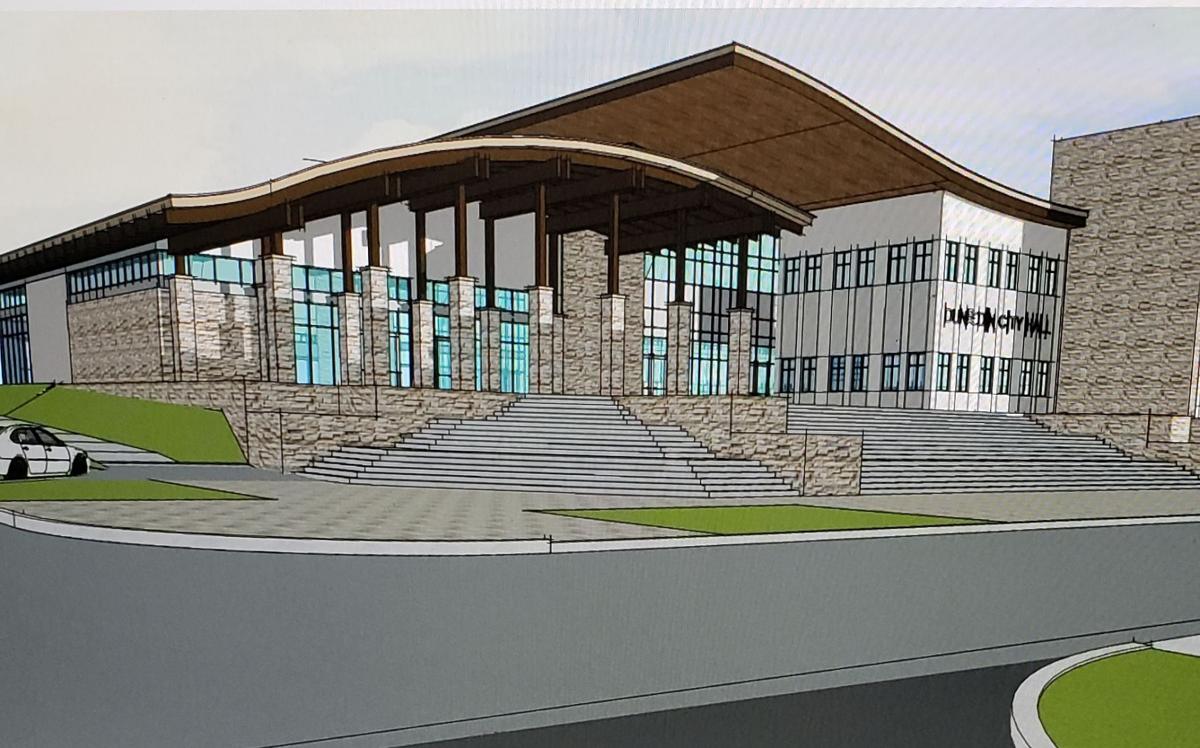 DUNEDIN — The design of Dunedin’s new City Hall-Municipal Services Complex promises to be the “wave” of the future.

After months of discussion and whittling down seven design options to a final three, commissioners finally agreed on a “wave” roof design for the look of the new complex on Wood Street and Louden Avenue.

During the Feb. 20 meeting, after more deliberation, commissioners decided on a design that features a curved wave-shaped roof that extends onto an overhead main entrance canopy supported by pillars.

The entire complex, which will be home to various city departments and City Commission chambers, will be designed with large windows to allow the most natural light to enter the facility.

An ornamental tower feature, favored by commissioners in earlier designs, was not included in the wave concept. Other designs that were ultimately nixed included a rotunda-style roof that could have included the tower feature, or a simple canopy roof over the main entrance of a shaded plaza.

Commissioner Maureen Freaney noted city advisory boards that weighed in on the choices were unanimous in selecting the wave design.

“When I look at all the input, even though not everybody will agree on it, most people have centered on the wave,” she said.

An alternative wave design, which was only favored by Commissioner Deborah Kynes, included an “eyebrow-looking” wave feature affixed to the side of the building to break up the look of a row of windows.

Kynes said her choices were the rotunda with the tower or the wave design with the eyebrow feature. She said her wave choice is “much more iconic. If you are looking for something really different, that second wave does it.”

Mayor Julie Ward Bujalski, who ultimately voted on the wave design, said she really liked the coastal style concept best, but it was nixed early in the decision-making process. She said she has a hard time with flat roof design and is not into modern architecture.

When she saw the last round of architectural renderings, she said “the wave didn’t look as bad to me as it had for a long time.” She added, “I don’t want to put this off anymore. … If we put it off it will cost us more, because the cost of constriction is rising every day.”

The cost to construct the complex is $15.4 million. A proposed parking garage would add another $7 million for a total of $22.4 million.

Before the decision was made, Bujalski said commissioners have received comments from some members of the public asking to delay the project for a number of reasons, including those who wanted to find another site or did not like the architectural designs.

During the public comments section of the hearing, former Commissioner John Tornga suggested the city should delay the project to see if it could acquire the Coca-Cola plant property after it moves out of town.

City Manager Jennifer Bramley and Assistant City Manager Doug Hutchens noted the plant is not expected to leave the city for at least two years. In addition, the property is zoned light industrial, and would have to go through city and county rezoning process, with the county not inclined to rezone a light industrial property.

Hutchens reminded commissioners the municipal services complex has been demolished and city departments are operating out of leased commercial space, which raises the cost of the project.

“You as a commission picked your top three,” he noted. “Those are the top three you are looking at here tonight. This is not a failure; this is a decision point we need to make to go forward. I think you’ve seen every angle and every perspective, birds-eye to at-grade. If you pick one this evening, they can do refinements based on any further input you give. … I plead that you make a decision this evening.”

Commissioners unanimously voted to endorse the wave design so the process can move forward.

Now that commissioners narrowed down the look of the future City Hall, city staffers said a parking component and proposed garage will be discussed at a yet-to-be-scheduled workshop.

According to the timeline submitted by staff, Harvard Jolly Architects expects to complete schematic design by end of February, with design development undertaken from March to May. Construction documents will be drafted from May 26 to Sept. 30, with the project put out to bid in October and awarded in December 2020. Construction is then expected to take place from January 2021 to March 2022.