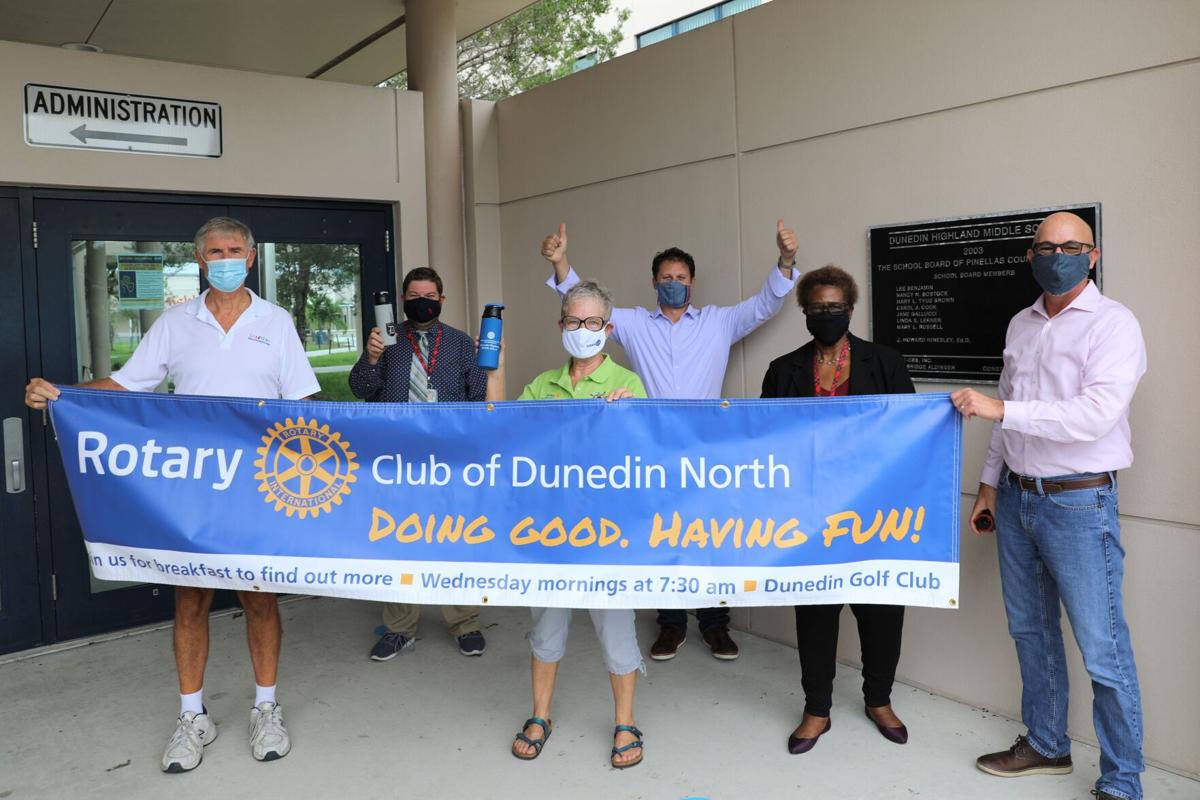 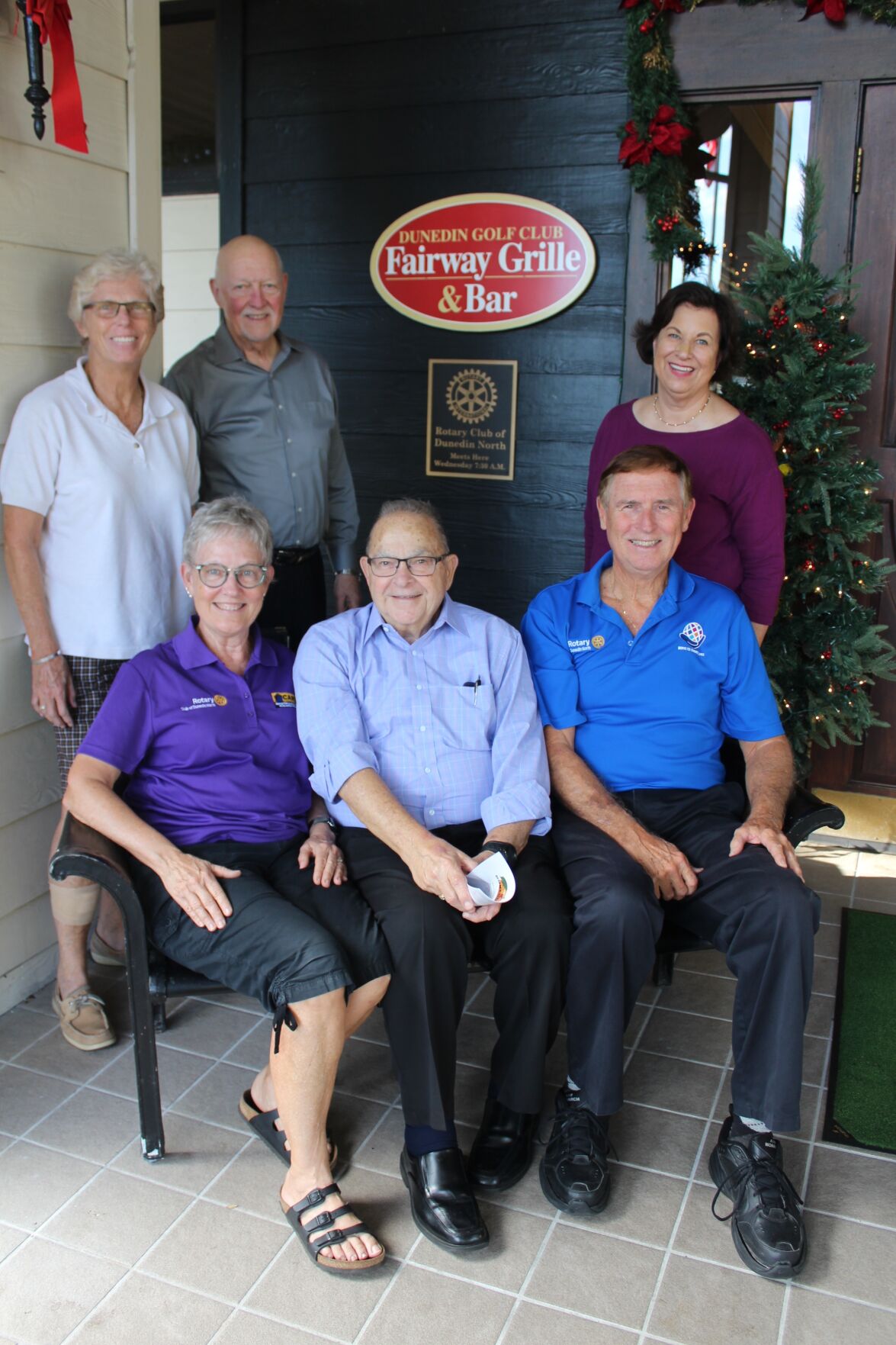 DUNEDIN — Never in a million years did local chiropractor Pat Snair think that she would learn to install soffit.

It wasn't part of the chiropractor's job description. But Snair got the hang of it from Habitat for Humanity while working on a project, and it's one of her many memories as a member of the Rotary Club of Dunedin North, which is celebrating its 50th anniversary.

"With our speakers and the people that are here and the things that we do, it's a family to me," said Snair, who was the first female to join the club in 1988 and became president in 1994-1995.

Allen Kynes was encouraged to join the club in the 1980s so that he could add something important to the community.

"I went and shortly thereafter they made me the song leader," he said, drawing laughter from fellow Rotarians during an interview Dec. 15.

He went from that responsibility to sergeant of arms and about two years later the club named him president.

Rotary is a wheel, Kynes said, and the wheel signifies there are a number of spokes to it.

"But utilizing all those talents of the various spokes of the wheel, we can be a really dynamic organization benefiting the community. It's what we enjoy doing. We enjoy working together," he said.

The club, which now has 44 members, has been involved in countless projects since its inception.

Among those are planting 18,000 trees and plants at Honeymoon State Park, completing the pavilion at Highland Park, helping underwrite St. Petersburg Symphony Orchestra concerts and supporting many organizations, such as the Clearwater Free Clinic.

Manny Koutsourais, a charter member of the club and former mayor of Dunedin, was exposed to the club by a relative to who was actively involved in it.

He lauded the projects Rotary has supported over the years, such as a program to eradicate polio, and the speakers the club has on a weekly basis.

It's been tremendous to me," he said. "After all these years I made a lot of friends for one thing … I have gotten a lot out of the function of Rotary."

Club president John Tornga has been a member of the club for six years, enjoying, as others, the friendships and giving back to the community.

"There are so many creative people here who will jump in and do something. It might be a small project. It might cost $2,000, $3,000. But there is no paperwork. There are no ribbons to cut.

"There are no channels to go through. We will just jump in and do it. Somebody will grab a hold of it and say we got to take care of this," said Tornga, a city commissioner.

She joined the club, which has 44 members, about eight years ago after moving to Dunedin from Sandusky, Ohio, where she was the second woman there to join a Rotary Club.

"This club's longevity I think definitely goes to threads we have that are both longstanding and welcoming to those of us who have joined this community," she said.

Sherrie Davis Kinkead, also a former club president, said being a member of the club is to best way to find out what's happening in the city.

"It's very valuable in business, in connections and friends when you don't know anyone," she said.

Among the major projects undertaken by the club was providing water bottles to Dunedin Highland Middle School staff and students at the start of the 2020 school year because the water foundations were turned off due to COVID.

"We weren't satisfied with just giving a couple hundred," Kinkead said. "The club decided that every student and every staff member needed a water bottle."

More than 1,200 bottles the club distributed were personalized with the school's logo on them.

Plans are under way for the club's Heart of Dunedin, set for Feb. 6.

A similar program was held two years ago designed to honor and recognize nonprofit organizations in the community.

"It's a just such a feel-good moment to know so many things are happening by so many people," Carroll said.

The club, which meets Wednesdays, 7:30 a.m., at the Dunedin Golf Club, is also ringing bells for the Salvation Army during the holidays and working to help families who cope with Alzheimer’s and dementia, Tornga said.

He said the club raised $8,500 in a cornhole tournament for the cause.

"We all serve to change lives, and that's one of the guiding lights for us," Tornga said.

Allen said one of the smartest actions Rotary took was to allow women to join.

Because of that decision that Rotary made back in the 1980s, Rotary has become stronger. Some organizations that remained resistant to allowing women to join their ranks have fallen by the wayside, he said.

Allen also said the club has to continue to "bring the youth in to go through the same process we all did."

Snair recalled that joining the club was "kind of a funny experience because a lot of the guys who were in the club were part of the older generation and I went to high school with their kids. They looked at me a little differently. Not only was I female. I was a kid," she said.

Asked if she felt intimidated to be the first female club member, Snair, who is active in the Scottish arts and numerous other community activities, got a laugh from her fellow Rotarians.

The club — throughout the years

From information provided by the Rotary Club of Dunedin North.

• District Gov. Hampton Dunn was challenged in 1971 to form a new Rotary Club in the Dunedin area. After three months of provisional meetings, the club was chartered on Nov. 21, 1971.

• In the early years feeling the term "snowbird" somewhat offensive, the club called its many regular winter guess "sunrisers," as befits a 7:30 a.m. meeting time. The name changed later to "Red Badgers."

• In 1978 the club's membership remained around 50 and was consistently one of the highest clubs in the district for its attendance record.

• In 1986 a pavilion for the Highlander Park was suggested as a worthwhile club project.

During the next year "Bill Huettig became president and got the ball rolling.

The club contributed $10,000 in seed money and another $20,000 was raised by asking for direct contributions and holding fish fries."

"Many of the members put in sweat equity, such as digging trenches and pulling wires, with Bill putting in the longest hours."

• In ensuing years many projects were completed with great participation by members of the parent club and other community groups.

• In 2003 Rotary International was looking ahead to their centennial year in 2005 and asked clubs around the world undertake a major project to celebrate.

The two Dunedin Rotary clubs combined efforts on the establishment of a new nature center at Honeymoon Island.

Rotarians and officials met June 8, 2004, at the new site of the Rotary Centennial Nature Center for a groundbreaking ceremony.

The clubs raised $90,00 toward the renovation of the building and enlisted other chapters and supporters to raise funds for the exhibits.