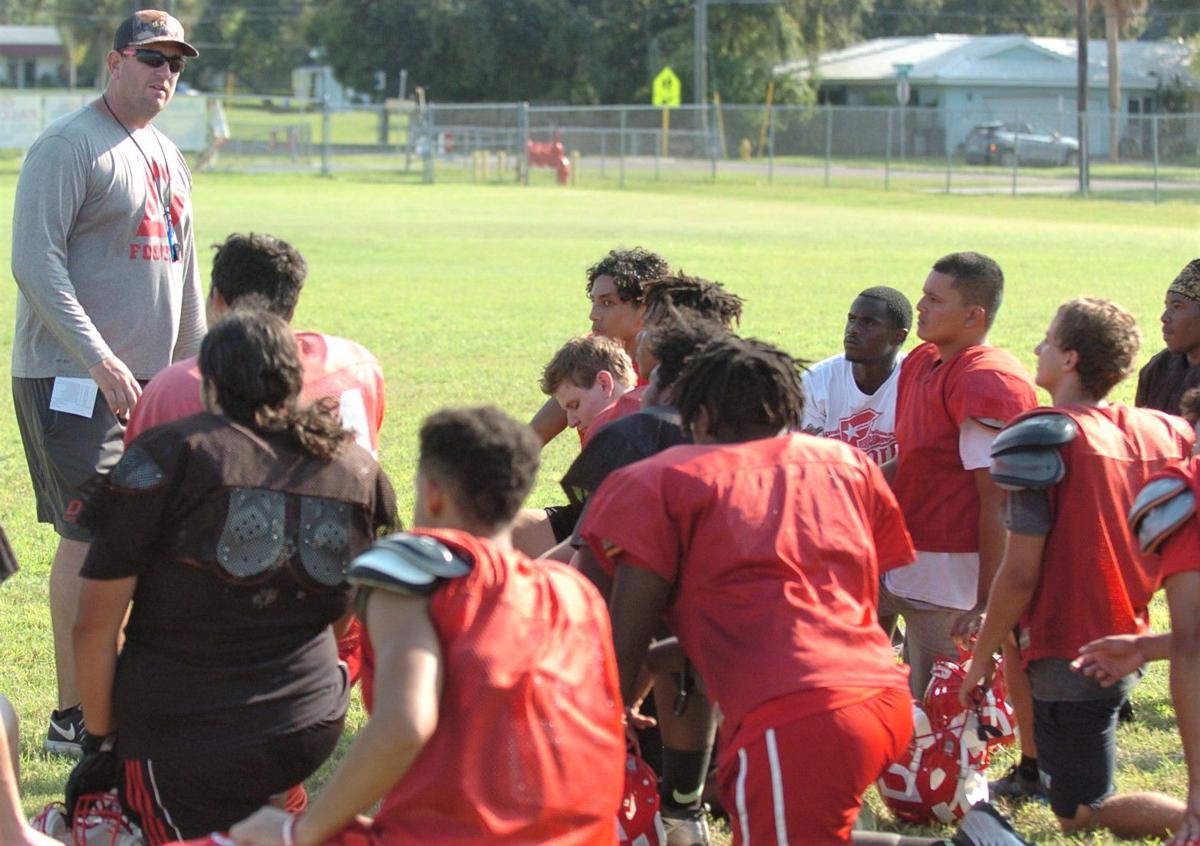 Dunedin Coach Mitch Disney talks to his team following a practice. The Falcons put an end to its 43-game losing streak this year and improved to 4-1 by beating Gulf Friday night. 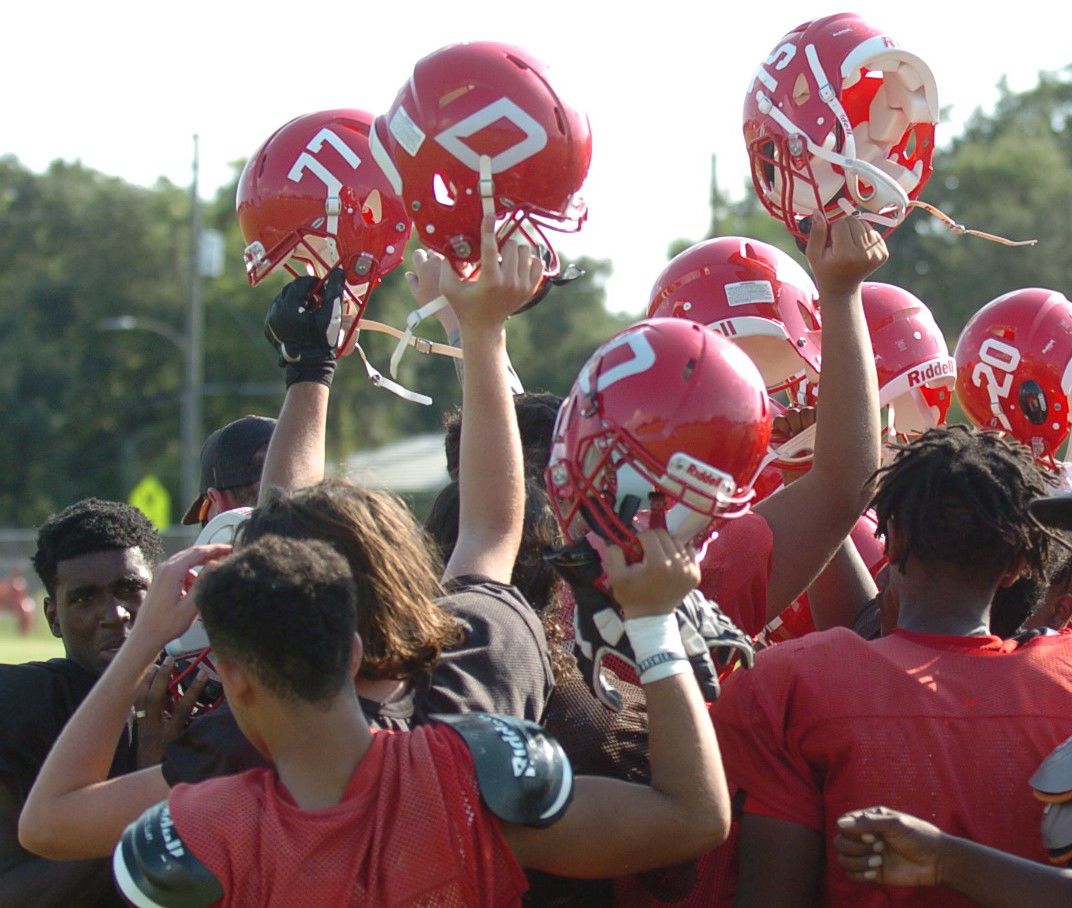 Dunedin is the feel-good story of Tampa Bay-area football this season. The Falcons put an end to its 43-game losing streak this year and improved to 4-1 on Friday night by beating Gulf.

Dunedin Coach Mitch Disney talks to his team following a practice. The Falcons put an end to its 43-game losing streak this year and improved to 4-1 by beating Gulf Friday night.

Dunedin is the feel-good story of Tampa Bay-area football this season. The Falcons put an end to its 43-game losing streak this year and improved to 4-1 on Friday night by beating Gulf.

That’s the date Dunedin lost 74-0 on a Thursday night against Lakewood. The lopsided defeat dropped the Falcons to 0-4 on the season and was the third of eight straight shutouts they’d be dealt that season.

It was also the program’s 28th straight defeat, an unflattering streak that began in 2014 and picked up downhill momentum each and every year. The number hit 43 when last season’s 0-10 campaign came to an end with a 37-8 loss at Palm Harbor University, the last team Dunedin beat back on Oct. 10, 2014.

“That night I remember I told the kids if you don’t want to be here Monday I understand,” said Dunedin Coach Mitch Disney. “I’ll know who’s committed by who shows up Monday. If not, I’ll clean out your locker out no problem.”

That was the middle of Disney’s first year as head coach after taking over that July, about two months prior to the 2017 season’s kick off.

“I remember talking to coaches on the weekend, saying we might not be able to play Friday,” he said. “They all showed up and that blew me away.”

Disney recalled that challenging memory from his office earlier this month. There were more losses to come following that 74-point browbeating against Lakewood – 15 to be exact – but the coach had commitment to build upon. The 2017 season ended with just 23 total players. That number grew to 41 last year and bumped up to 54 this fall.

The Falcons progressed from scoring just six points in 2017 to competing against other lower-tier programs in 2018. The wins weren’t coming yet, but players could feel the change in trajectory.

Confidence jumped again this summer when coaches took the team to the Grind It Out camp hosted by the defensive coordinator of Webber International University in Lake Wales.

“That really brought us together and showed us that we’re able to play with a lot of other teams,” said senior running back Davious Haywood.

The players who persevered through the losing and the new recruits who signed up during it are now — finally — realizing that hard work, dedication, buy-in and belief pays off. Not only did Dunedin put the losing streak to bed by opening the 2019 season with a 44-23 win at Keswick Christian, the Falcons began 3-0 and are now 4-1 after dismantling Gulf 43-6 on Friday night.

While the turnaround caught the attention of the entire area — Disney was named the High School Coach of the Week by the Tampa Bay Buccaneers after beating Keswick — it didn’t exactly surprise those within the program.

“When we all wrote our goals down — personal, academic, all that — we talked about tangible goals,” Disney said. “Most of the kids, especially the older ones, wrote that they’re trying to get a winning record — trying to get six (wins).”

Attracting players back to the program has played a big role in turning things around at Dunedin, but it’s more than just putting bodies on the field, said Haywood, who’s averaging well over 100 rushing yards a game. “A lot of the kids on this team are disciplined. It’s all about discipline. Everybody doing what they’ve got to do, everybody listening to the coach. It’s the mental stuff.”

“It’s about setting an example for the younger kids because now we have a JV team again and there are a lot more players,” said senior linebacker Miguel Galarza, one of Dunedin’s tackling leaders. “They see us leading and it sets the whole tone for the program.”

Dunedin is on a bye this week and gets five more chances to add to its win total. Two more and the Falcons hit their goal of six and a winning season – the program’s first since going 6-4 in 2012. That will be no easy task considering the remaining schedule, but the current roster has already succeeded in resuscitating a once-successful program. The fact that Dunedin used to be one of Pinellas County’s best is not lost on current players, either.

“Both of my uncles played here, back when they were the state finalists and everything,” Winoski said. “So when I started playing I was like, that’s what I want to leave. I want to leave a winning mentality. I want the JV kids to come up here next year and be like, I’m going to do that and we’re going to keep this going on. I don’t want this to be a one-year thing.”

“The season’s not over,” Galarza said. “I think we can still do better, but it means a lot to finally turn it around at Dunedin.”