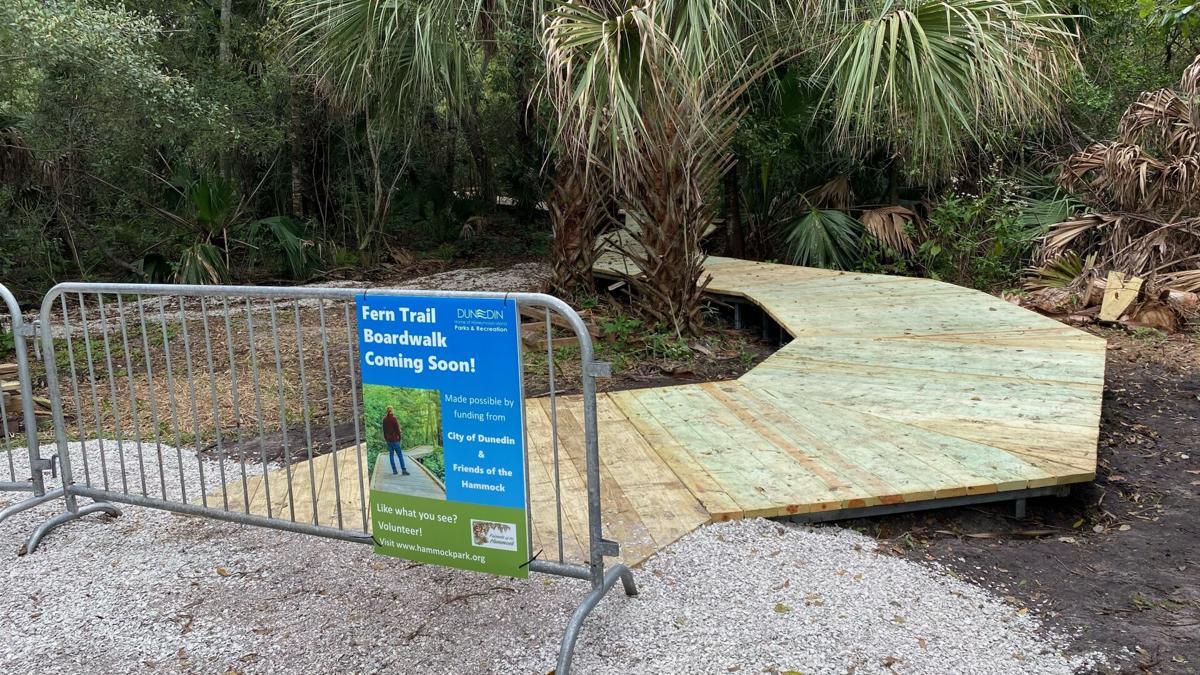 Construction of the boardwalk for the Fern Trail should be completed in December. 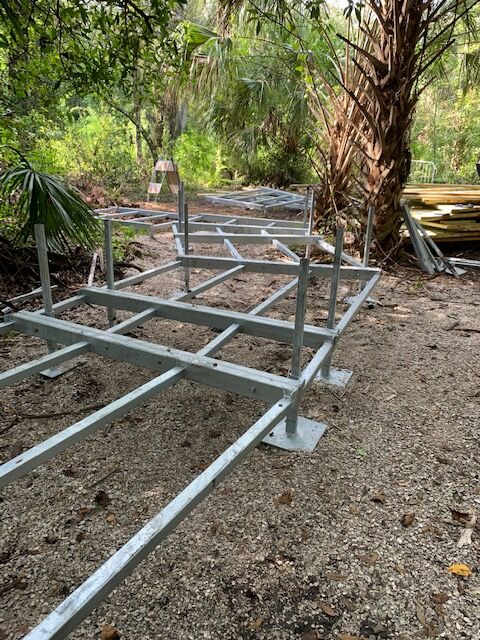 The Fern Trail boardwalk is a collaborative effort between the city of Dunedin and the Friends of the Hammock. 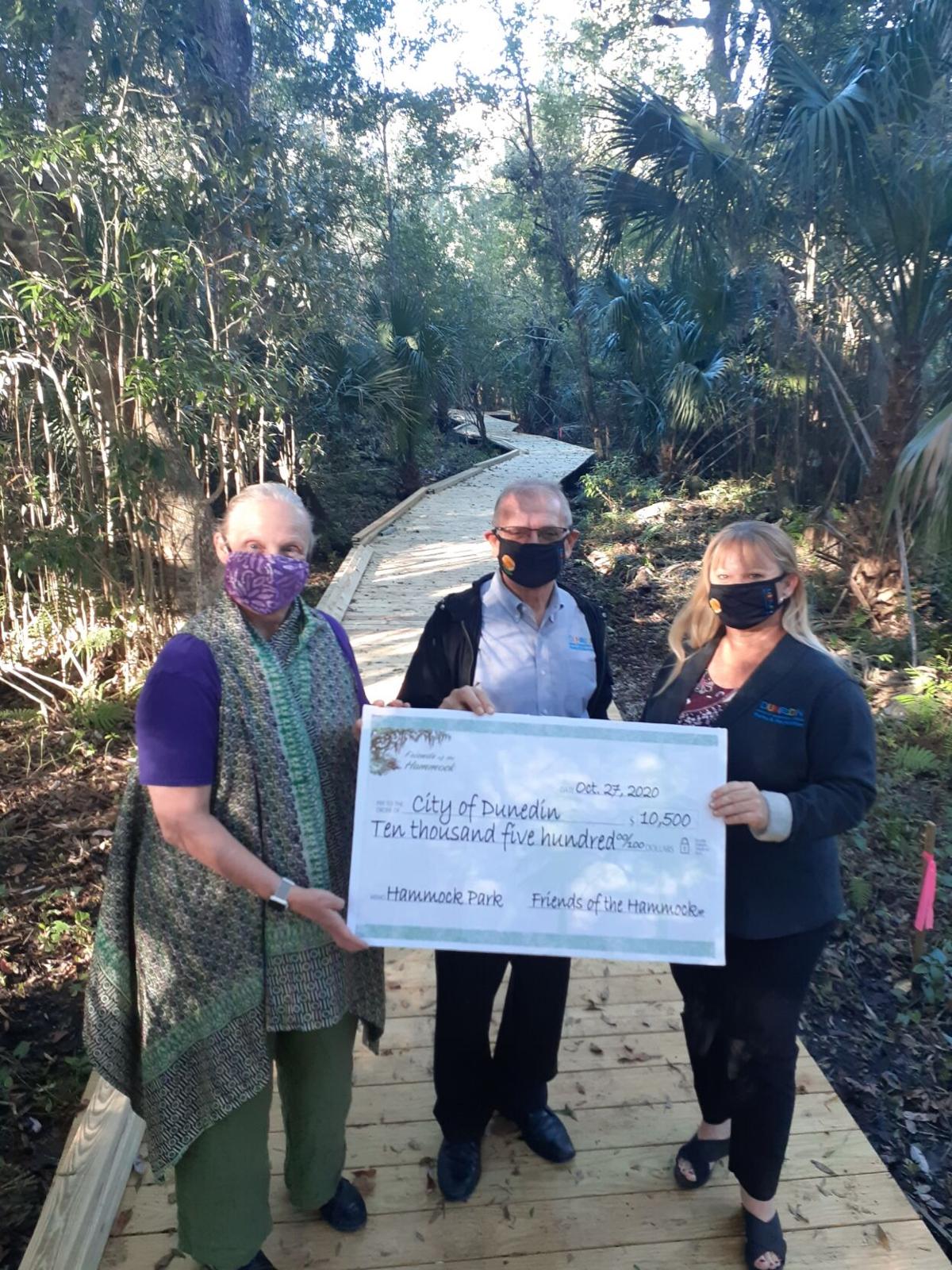 The Friends of the Hammock presented a $10,500 check to the city for the Fern Trail Boardwalk on Nov. 17. From left are Friends President Pam Hillestad, Parks & Recreation Director Vince Gizzi, and Parks & Recreation Administration Superintendent Lanie Sheets.

Construction of the boardwalk for the Fern Trail should be completed in December.

The Fern Trail boardwalk is a collaborative effort between the city of Dunedin and the Friends of the Hammock.

The Friends of the Hammock presented a $10,500 check to the city for the Fern Trail Boardwalk on Nov. 17. From left are Friends President Pam Hillestad, Parks & Recreation Director Vince Gizzi, and Parks & Recreation Administration Superintendent Lanie Sheets.

DUNEDIN — Users of the Fern Trail will soon be pleased that traversing it will be a walk in the park.

That hasn't been the case in recent years because the trail runs through a wet area in the heart of the city's 90-acre Hammock Park.

City officials expect to complete work on a raised boardwalk on the Fern Trail in December.

"I said many times, I think this will be the greatest addition and enhancement to the Hammock in the past 20 years," said Lanie Sheets, city parks & recreation administration superintendent.

In 2014 city officials and the Friends of the Hammock, a nonprofit group, determined that the trail needed to be closed to the public.

During the wet parts of the year, visitors would have to sidestep the trail to keep their feet dry and out of the mud, Sheets said.

"To avoid people expanding the footpath and destroying additional areas of the plants, the trail was shut down for a number of years until we could come up with a solution," she said.

To confine foot traffic to a specific area and still allow people access to the trail, staff came up with the concept of an elevated boardwalk.

The city didn't have funds for the project in 2015 since it wasn't a budgeted item, Sheets said.

At about the same time the Friends of the Hammock were proactive in the boardwalk project, raising $10,500 to help fund the project through a campaign.

City officials worked through a couple of budget cycles to get it funded in the city's capital improvement plan, Sheets said, and contributed the remainder of the funds needed. The total cost of the boardwalk is $225,000.

The large cost of the project is due to it being a quarter of a mile long — a significant addition to Hammock Park.

"It's 6-foot-wide, ADA accessible and it will allow for visitors into one of the most beautiful areas of the park while also preserving the habitat in there," Sheets said.

The boardwalk will have a steel frame with wood decking. When it's finished, all the users will see is the natural wood. Plans call for the boardwalk to stay at a fixed height, but it could be raised if necessary.

"We don't anticipate needing to," Sheets said. "That area stays moist, but not flooding. I don't anticipate there being a time when there is so much standing water in there that we would need to raise the level of the boardwalk."

Pat Jennings, board member of the Friends of the Hammock, is pleased by the organization's fund-raising efforts.

Calling the Fern Trail the prettiest in the park, she noted that the trail was inundated with users.

"Bicycles were going through it, making huge ruts; people were walking around wet areas disturbing the ecology on either side of the trail, and that's when we recognized we had to do something," she said.

Fern trail is named for the dominant growth of native leather ferns and sword ferns in that area. It is a naturally moist area, especially during the rainy season of June through September and has been known to be flooded through the majority of the year, the Friends website says.

Drainage steps taken during the 1970s caused the park, at 1900 San Mateo Drive, to suffer hydration loss. A high water table is necessary to maintain the natural wetlands surrounding the hammock where native ferns are abundant, the website says. Rehydration efforts were called successful.

Asked what she likes about Fern Trail, Jennings said it remains greener because it is on wetlands.

"It stays more mush, and we have four or five different brands of ferns in there that are just gorgeous, so I think that's one of the reasons people love it the most," she said.

Hammock Park has five miles of nature trails, three picnic pavilions, an observation platform, restrooms and a playground area. The park is listed in the "Great Florida Birding Trail Book."