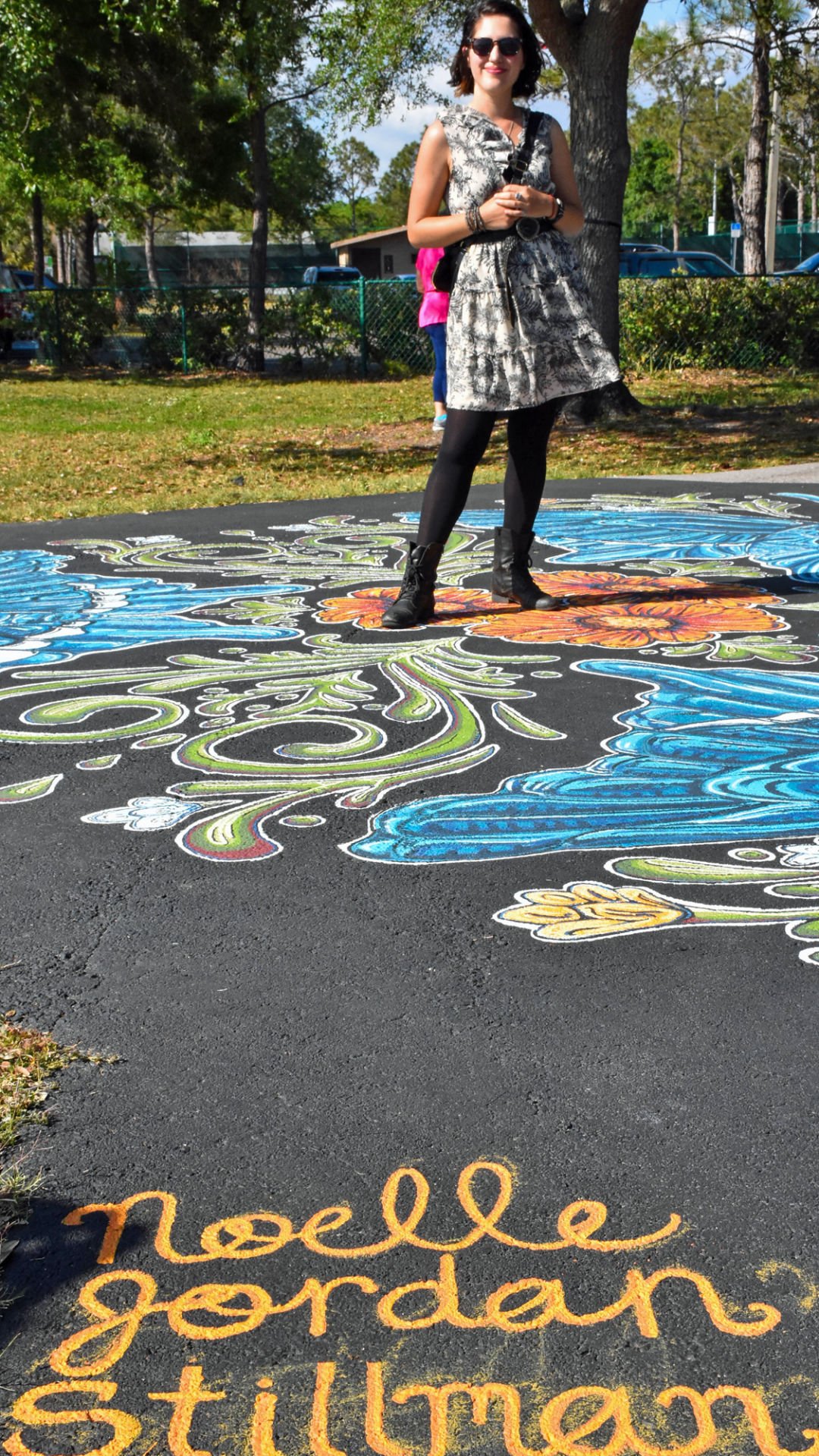 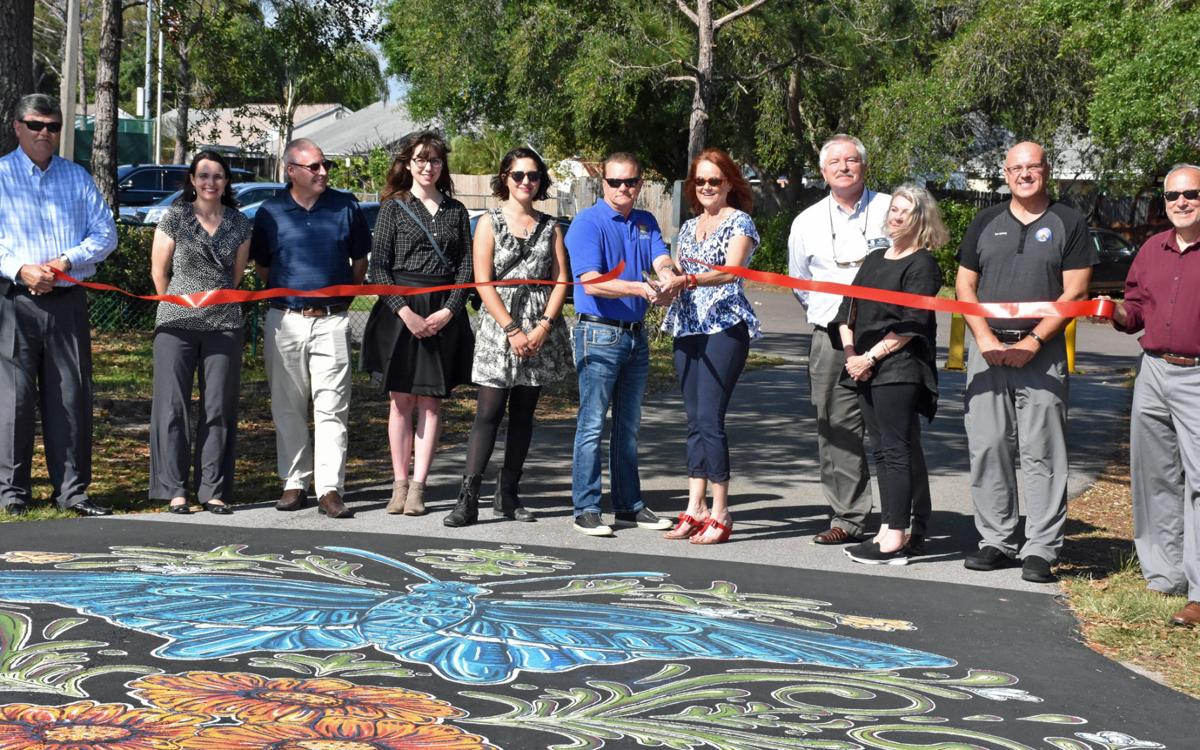 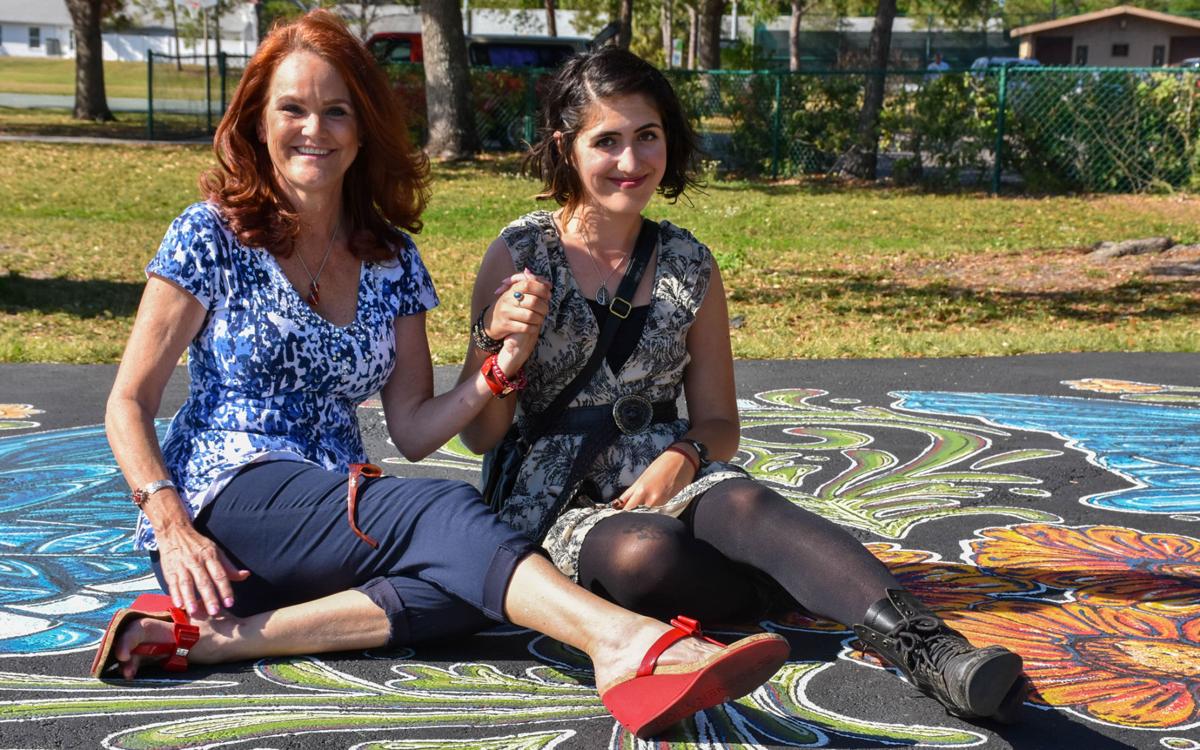 OLDSMAR – Palm Harbor artist Noelle Stillman made a splash in Oldsmar when her colorful mural was unveiled during a March 30 ribbon-cutting at Sheffield Park.

The piece, titled “Native Balance,” was the second public art project for the North Pinellas Cultural Alliance, a nonprofit formed in 2015 to help promote art, culture and history in several north county communities.

Stillman’s work was also the second public art project in Oldsmar following a mural painted at R.E. Olds Park, in 2016.

After the ceremony, which was attended by NPCA board members, including chair Linda Norris, Ken Hannon and Deborah Kynes, Stillman, a teaching artist at Clearwater’s Sandy Lane Elementary School, said being the lead artist for the first time on a project in a city she has enjoyed visiting was a very special experience.

“This was my first project with artist’s reign and it was probably the most supportive and uplifting experience I could’ve asked for,” the 27-year-old New Hampshire native said. “I’ve hiked in Oldsmar for years and it was nice to be able to come back and paint this mural.”

According to Norris, Stillman was selected for the organization’s second project after a call-to-artists went out last September. Norris told the Oldsmar City Council in November it was immediately clear to the selection committee that Stillman’s design, a bright collection of flowers and butterflies native to the area set against a stark black background, was perfect for what the panel had in mind.

"Noelle’s resume was extremely impressive to the selection committee," Norris said on Nov. 21. “What we also liked about her is she thinks a little bit outside of the box. We really liked some of the other proposals, but Noelle’s was definitely our favorite."

After the unveiling, the reason for the committee’s excitement was clear, as the large mural, which sits at the pedestrian entrance to the park, is clearly an attention-getter.

“The piece is beautiful,” Mayor Doug Bevis, who did not attend the ribbon-cutting, said later. “When I saw it in person it was a lot more vibrant and it really popped. The artist really did a terrific job on it.”

Norris added, “Noelle exceeded our expectations with her beautiful creation."

Stillman, who holds a master’s degree in art education and has worked on projects in Clearwater, St. Petersburg and her native New Hampshire, said she is about to embark on her next project, in her adopted home.

“I’m going to be doing a painted table for a project at the Palm Harbor Library,” she said, noting she will be “live painting” at the library on Nebraska Avenue 5-7 p.m. Saturday, April 28.

She also freelances with the Nomad Art Bus, in St. Petersburg, and has a show coming up in New Hampshire.

She added that she was thrilled to be part of the NPCA’s latest project because it helped showcase another Pinellas County community that is committed to public art.

“Public art is what’s making Tampa Bay fabulous and it’s wonderful to see Oldsmar supporting it,” she said, adding, “It’s nice that they are moving in the direction to welcome public art here.”

Bevis concurred with the artist.

“You can’t forget the arts,” he said. “Art is a big part of what makes a community a community.”