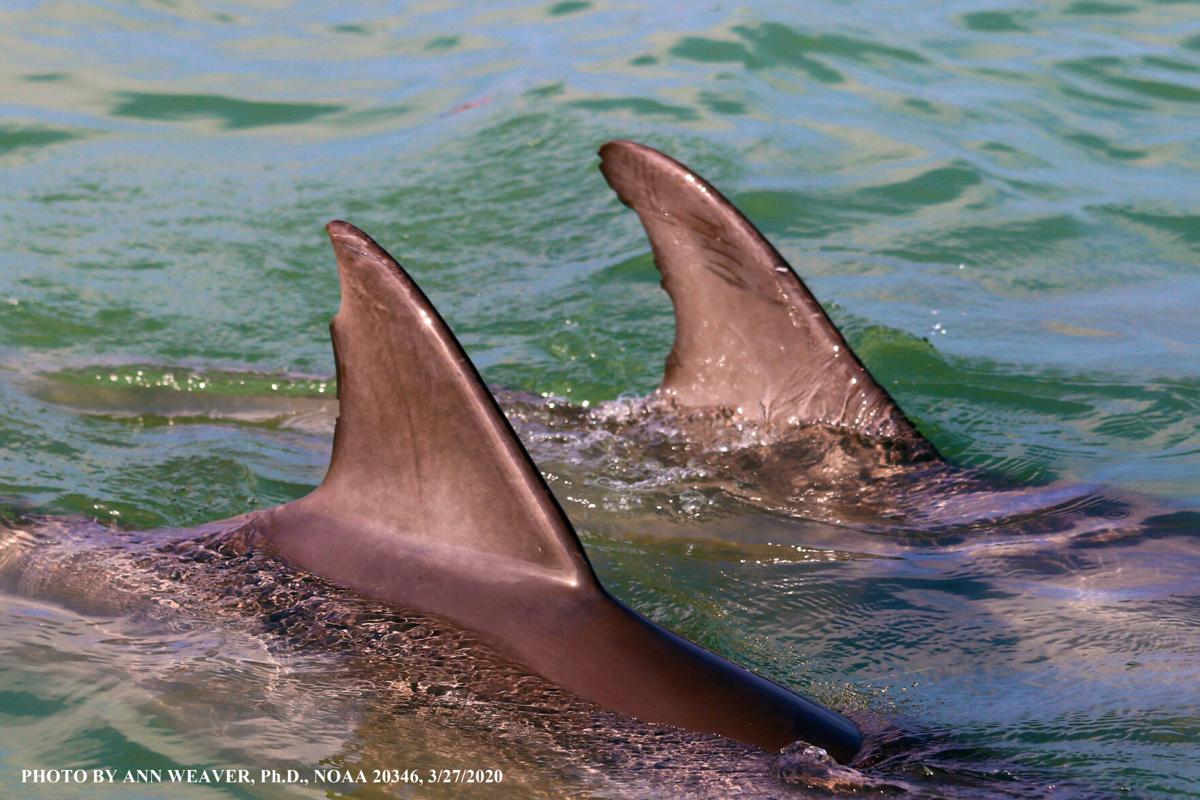 Local bottlenose dolphins Cosmos, right, and Prism take a mobile nap. Cosmos is missing the tip of its dorsal fin, compliments of a small shark. The neat little amputation removed all of the marks that could be used to identify the dolphin except a tiny square notch low on its fin. 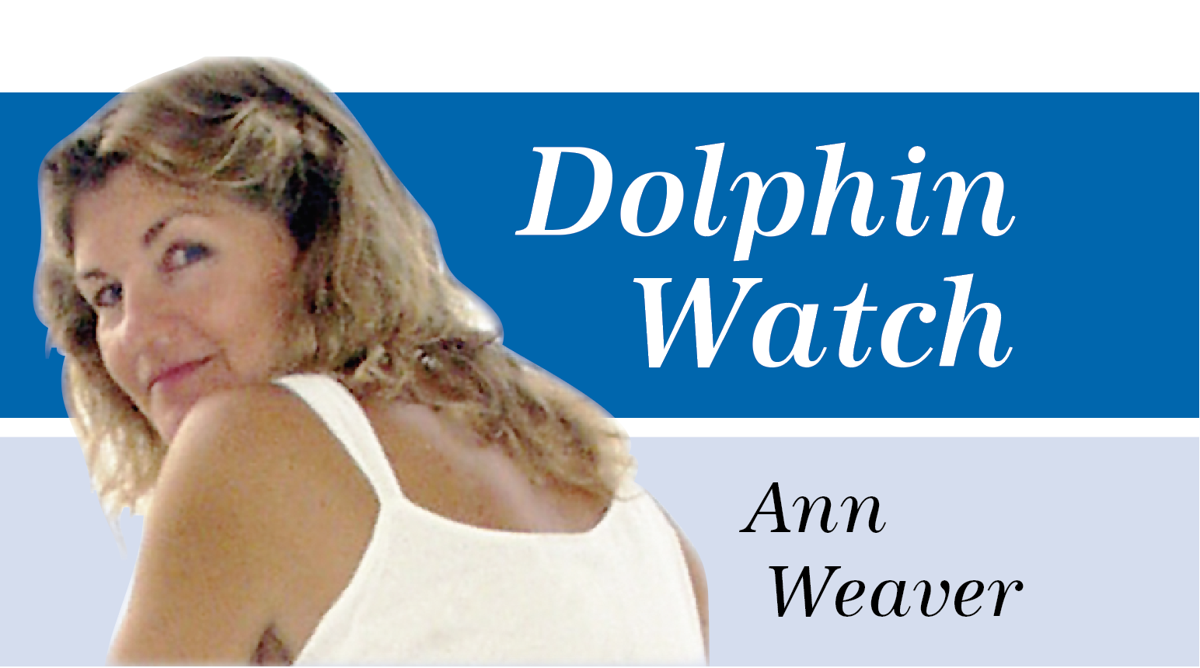 By now, most of us have experience wearing a mask into sparsely-populated public places and veering away from other masked patrons to maintain the recommended social distance. It can be unsettling to be veered away from because it creates the creepy feeling that one is contagious.

I saw a clerk in a local shipping shop literally recoil from an unmasked patron and brusquely demand that he back away from her several feet, a dance they danced as they thrust paperwork at each other involved in sending the patron’s fax. One feels sure that the patron will find another shipping shop whose clerk does not make him feel as if he were visibly crawling with cooties.

Masks hide vital social information. One might see another patron’s eyes crinkle in a smile, but the smile itself is hidden. From what I have seen, masks make it easier for some people to be rude or, at a minimum, dismissive.

Masking one’s identity happens at sea among our local dolphins too. In an interesting twist, it was the lack of change from friendly behavior that recently provided clues about the identity of a mysterious “masked” dolphin.

Capt. John Heidemann and I study local dolphins under federal permit. We tell dolphins apart by unique patterns on the fin that sits on their backs like a sail, their dorsal fin. Though made of tough cartilage, the dorsal fin becomes ripped and otherwise scarred over time because the dolphin uses it as a sword, shield, and chew toy. Most of the resulting tatter patterns are subtle, a little nick here, a little notch there. Tatter patterns on males tend to be more conspicuous and change more over time because males engage in more rough-and-tumble exchanges than females do.

However, all dolphins run the risk of tangling with a shark. Even a light chomp from a shark can disfigure a dolphin’s previous pattern. Disfigurement of the dorsal fin can mask the dolphin’s identity to observers like me. Lack of recognition is partly because familiar tatters are gone and partly because I recognize tatter patterns holistically.

Thus, somewhat like wearing a mask, losing part of the pattern can obliterate the dolphin’s identity for me in the field. However, back at the lab, I am able to search my photo archives to see if any remains of the previous pattern match one of the 418 dolphins in our photo-identification catalog.

As masks were becoming mandatory on land, Capt. John and I came across a trio of teen dolphins in early spring. Two were known to us, Prism and Yukon. Both were males born in 2016 and newly-weaned from their mother’s care by the age of 4 years.

Prism had tangled with a small shark in 2017, known in our house as the Year of the Snappish Shark for the unusual outbreak of dolphins with fresh shark bites that summer. In Prism’s case, his shark scars make him easy to recognize. Yukon sustained a wound the following year, though not clearly from a shark.

The third teen in the trio had also tangled with a small shark that amputated the top of its dorsal fin. We did not recognize this dorsal fin pattern. There were two possibilities. One was that the dolphin was new to us, such as a friend the boys brought to town from Egmont or Clearwater. The other possibility was that the dolphin was not new to us but that the shark bit off its identifying tatters, making it a mysterious “masked” dolphin.

My only clue to its identity was a tiny square notch where the skin was missing low on its dorsal fin. Because it represented mystery, I called the “masked” dolphin Cosmos in honor of astronomer Carl Sagan.

At first the teen trio was sleepy. This allowed Capt. John to glide our boat smoothly alongside them at close range. For many minutes I greedily collected high-quality photos to study later for more clues to Cosmos’ identity.

About the time we spied new dolphins in the distance ahead, the trio quickened and headed over. Soon the seas sizzled with a half dozen teens embroiled in riotous exchange. They thundered around the seas as twos or threes, rearing up and swimming over each other to playfully sink a schoolmate or rolling on their sides, pectoral fins waving like small flags at political rallies. Bright white bellies glared briefly against pale green waters. It was a good-natured wrestling match, sea style.

The mysterious “masked” dolphin Cosmos swam round and round the wrestlers. It appeared to be playing as hard as the others to the casual observer. But it was not, unless dancing on the side of a whirling merry-go-round is the same as riding it. This behavior was a clue that Cosmos was familiar with the other teens, all of whom were males, but was a female because teen females in our local waters tend to behave like this.

There was another possible clue about the “masked” dolphin’s identity from its behavior. Cosmos stuck close to Yukon. Yukon’s mother is Yami. Yami visits our local waters occasionally and swims with X when she does. X had a calf in 2015 we call Xenios, Greek for hospitable. From the few observations of these two dolphin moms and their calves over the last four years, we knew that Yukon and Xenios knew each other since they were babies.

Back at the lab, close inspection of the day’s photos of Cosmos revealed that the tiny square notch of skin missing from its fin was the only physical clue to its identity. I opened my photo-identification catalog and headed straight for Xenios.

Ah ha! The mysterious “masked” dolphin Cosmos was no more. Unmasked at last, Cosmos was Xenios! Now, tell us about that shark…

Dr. Weaver studies wild dolphins under federal permit 20346, National Oceanic and Atmospheric Administration. Send her an email or visit her website DolphinsDigital.org, the blog that brings people closer to dolphins. NOAA advises anyone who sees a stranded dolphin in the Gulf of Mexico to call 877-942-5343 or 877-433-8299.