Pinellas School Board candidate Dawn Peters, in the red shirt and white shorts, is shown appearing to take the QAnon oath in this screenshot from one of her Twitter accounts. 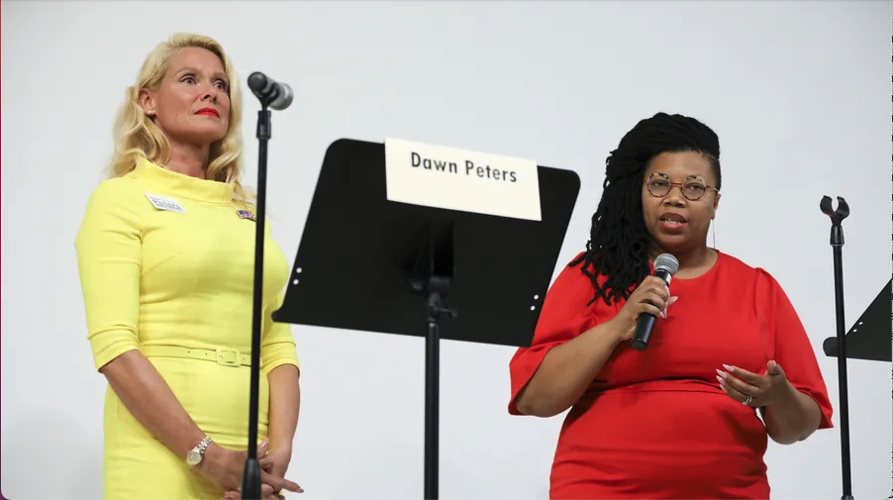 Pinellas County School Board candidate Dawn Peters, left, retweeted a post that called the moon landings, the 9/11 terror attacks and the coronavirus pandemic the “three major hoaxes of the modern world."

Pinellas School Board candidate Dawn Peters, in the red shirt and white shorts, is shown appearing to take the QAnon oath in this screenshot from one of her Twitter accounts.

Pinellas County School Board candidate Dawn Peters, left, retweeted a post that called the moon landings, the 9/11 terror attacks and the coronavirus pandemic the “three major hoaxes of the modern world."

Dawn Peters has made no secret of her strong support for the Republican education agenda in her bid for an at-large seat on the Pinellas County School Board.

“I signed the pledge pledging to the parents of the state of Florida that I will follow everything that Gov. DeSantis has put in place,” Peters said Oct. 17 during a candidate forum sponsored by the Council of North County Neighborhoods.

Her critics contend Peters has a more extreme set of views than her campaign reveals.

They have begun passing around screenshots from Peters’ social media accounts in which she is shown appearing to take the QAnon oath, refers to the 2020 presidential election as Trump 2Q2Q, and retweets a post about the “three major hoaxes of the modern world” — the moon landings, the 9/11 terror attacks and the coronavirus pandemic.

QAnon is an internet conspiracy theory that centers on a number of false claims, including that a cabal of satanic pedophiles undermined former President Donald Trump.

Peters said the posts are “obviously real,” but added that she did not recall what she was thinking when she shared them about two years ago. Asked if she believed that the moon landings, the Sept. 11 attacks and the pandemic were hoaxes, she said, “I have no idea.”

“Maybe people need to think and think for themselves,” Peters added.

Keesha Benson, who’s also running for the countywide seat, said she had received the screenshots from several of her supporters, who encouraged her to use them to label her opponent. Benson said she’s told them not to involve her in the discussion.

“I’m not going to run the race based on tearing down the other candidate,” she said.

As early voting nears, with absentee ballots already in the mail, the races for Pinellas County School Board have started to take a turn toward the nasty. Sometimes it’s the candidates’ backers who unearth the attacks.

Sometimes, it’s the candidates themselves.

Stephanie Meyer, a candidate in the District 6 race, recently distributed 2009 Facebook posts in which her opponent, Brian Martin, used gay slurs and made light of being gay, she said.

“I think that is incredibly wrong, especially for someone who has positioned himself as an advocate for the LGBTQ community,” she said, saying she got the posts from a concerned voter.

Martin said the photos show him drinking Mount Gay Rum at a friend’s wedding party, after which they made some “distasteful jokes.” He added that he would not stand behind the language used.

At the same time, Martin said, he has grown up in the 13 years since he made the juvenile comments.

“They had to go back pretty far to get something on me,” he said, noting that his feeds are now filled with family photos.

Martin expressed frustration with the Meyer campaign and its backers, saying they have contacted his donors to attack him as a “fraud” and made a host of unsubstantiated allegations against him and his family.

At the same time, some of his supporters have gone after Meyer, saying she has lied about her credentials, and threatened some of them with lawsuits for voicing their opinions about her, among other things.

Meyer says she is a public and private school teacher. She sometimes refers to herself as a history professor. She teaches history at Keswick Christian, and serves as an adjunct instructor at Hillsborough Community College, where she also leads some dual enrollment courses.

Several Martin supporters have taken particular offense at Meyer’s labeling of the Allendale United Methodist Church in St. Petersburg, where Martin has sometimes attended services. Meyer criticized photos of children with drag queens in the church as “filth.”

A member of the Pasco Democratic Public Education Caucus, which has no interest in the Pinellas race, sent a letter to Hillsborough Community College complaining that Meyer is “hateful and bigoted” and does not represent the school’s mission or vision.

Meyer has also weighed in on history lessons, saying teachers should stick to facts and not insert opinion into their instruction.

“I am not the one running a negative campaign,” Meyer said, arguing that she has not changed her position on the issues since her first board run in 2020.

Benson said she hoped voters will listen past the “noise” that has surfaced and get to the real issues that confront the community and its schools. The candidates differ widely on key areas, she noted.

For instance, Benson speaks at length about the need for equity in the schools, to ensure that all children get the proper services, while Peters rails against equity programs, suggesting the money could be better spent elsewhere.

It’s critical to “get to these core concerns ... and collectively solve them,” Benson said.

Peters agreed that the focus should be on items such as district spending, programs and services, and how the candidate would approach them. At the same time, she said it’s not out of bounds for the public to consider the endorsements, statements and social media posts that the candidates have made.

Some observers said they wished it weren’t so.

“School board races are nonpartisan for a reason, but school board races have been politicized,” said Kat Denomme, who received an email from the conservative Moms for Liberty group criticizing Martin.

“We don’t need that,” she said, “because it has a direct impact on our children.”