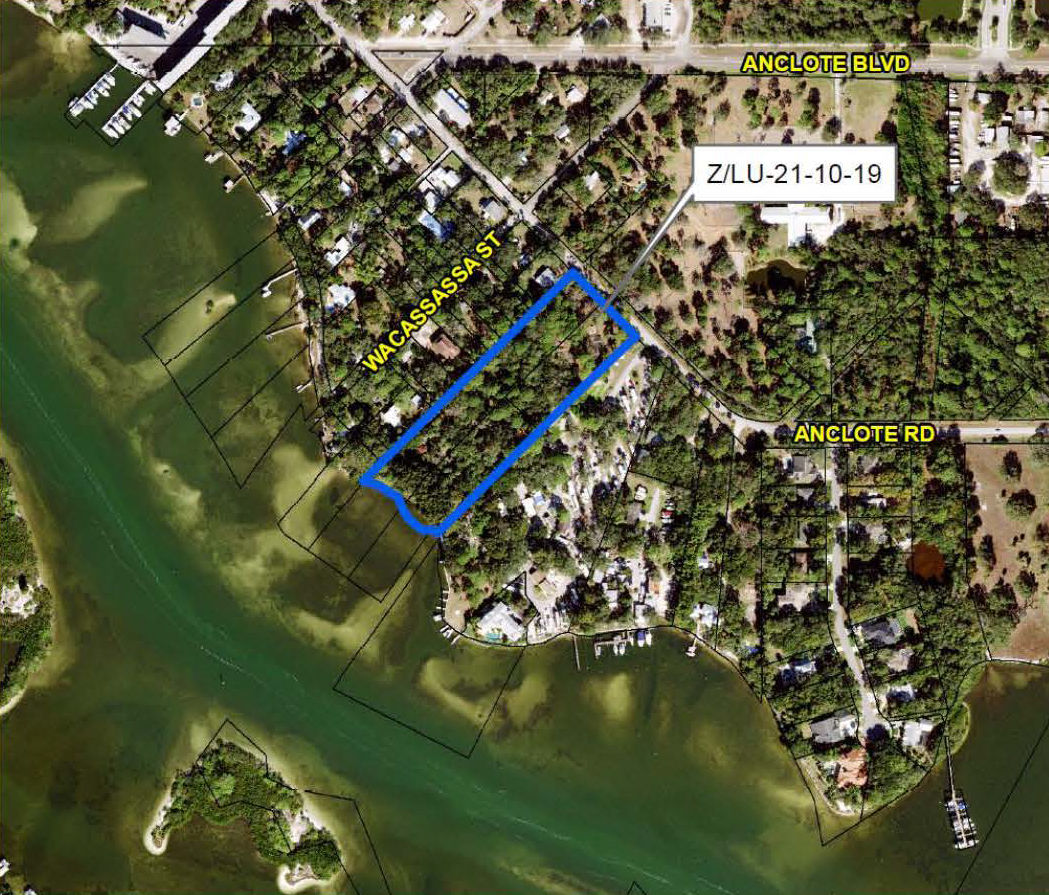 The owners of Hickory Point RV Park applied for a future land map amendment and zoning atlas amendment on the property outlined in blue, which is on the north bank of the Anclote River in unincorporated Tarpon Springs. The goal is expansion of the RV park.

The red dot is in the middle of 4.55 acres located on the south side of Anclote Road, about 200 feet southeast of Wacassassa Street. The owners want to amend the future land map amendment and zoning atlas amendment to allow for expansion of a RV park in that area.

CLEARWATER — Pinellas County commissioners agreed unanimously Dec. 10 to deny without prejudice a request for a future land map amendment and zoning atlas amendment that would have allowed for the expansion of a RV park on the north bank of the Anclote River in unincorporated Tarpon Springs.

County staff and the Local Planning Agency recommended approval after determining that the request is consistent with the comprehensive plan and compatible with surrounding land uses and the development pattern.

However, the neighbors don’t agree that the proposed expansion would be compatible. The land, which is currently vacant, is in an area with single-family homes, as well a marina and other commercial recreation uses.

Christine Roddey, owner of the Hickory Point RV Park and the applicant, said she was committed to maintaining a well-liked, well-run RV park.

“I believe this is a good fit,” she said.

Four residents spoke in opposition during the public hearing and many others sent in written comments. Among their concerns was additional traffic; however, staff said expanding the RV park would not impact the level of service on the roadway.

They also brought up the potential for installation of additional septic tanks. Staff said the property is within the city of Tarpon Springs wastewater treatment and a private utility’s water supply service area.

The neighbors are also worried that expanding the RV park would damage the character of the residential area known as Anclote Village. They were upset because they believe the owners would cut down all the big trees. The neighbors said that cutting down the trees and adding concrete pads for the RVs will create flooding in the area. They said an eagle nest is on that land.

Neighbors expressed concern about the potential for more transients walking and bicycling through the neighborhood as well as noise and loss of privacy.

They also pointed out that the land is in a coastal high hazard area. However, county staff said use of the land as an RV park would be better than other potential uses, as RVs can be moved if needed.

Several neighbors said the RVs didn’t evacuate during the last tropical storm; however, Roddey said they did. She said everyone left except for herself and her husband, who had to stay to monitor the property.

Craig Taraszki, who represented the applicant, said many of the neighbor’s concerns would be addressed during the site plan process. He said the applicant would have to address any endangered species, the need for a buffer between residential uses and other concerns.

Roddey added there were no plans to cut down all the trees. She said the number of RVs they would be able to put on the land would depend on the trees.

“We don’t cut trees to accommodate the RV sites,” she said. “We just put them where we can sneak them in (around the trees).”

Commissioner Dave Eggers pointed out other potential uses for the property if the commission approved the amendments, including putting in a marina. Staff said the only way to prevent the property from being used as anything other than a RV park would be to have a developer’s agreement or an overlay.

Commissioners said they would be more comfortable with approving the amendments if there were a developer’s agreement or overlay.

Commission Chair Karen Seel agreed, saying that the commission doesn’t “typically get into the site plan, but with the impact on the neighbors and the potential for a marina,” she believed this case is an exception.

“There’s more work to be done,” she said.