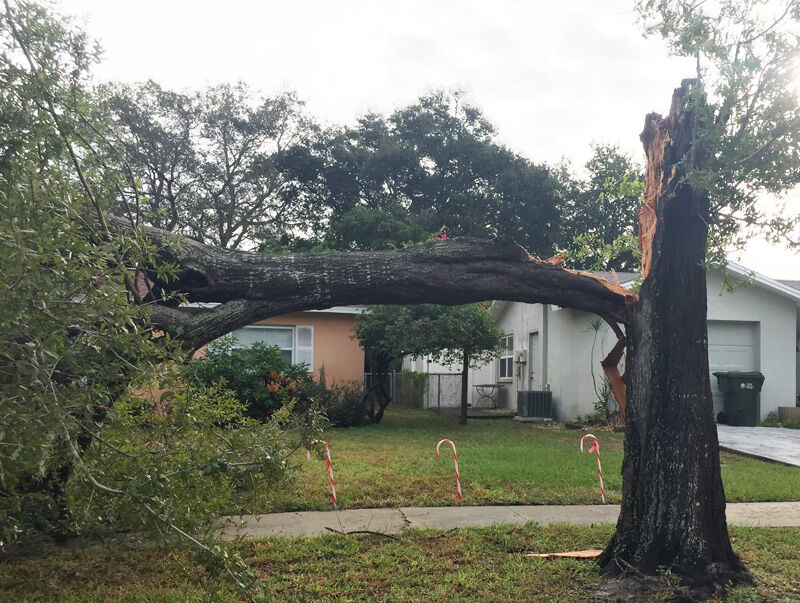 A tree in a Largo neighborhood didn’t survive Tropical Storm Eta’s high winds as it passed through the Pinellas County overnight. 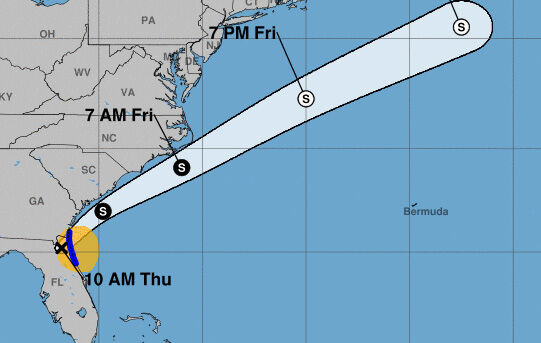 At 10 a.m., Eta was 10 miles southwest of Jacksonville and moving north-northeast at 15 mph. Maximum sustained winds were 45 mph. The center of the storm was moving over northeastern Florida. Eta is expected to move parallel to and offshore the Carolinas tonight and early Friday before heading east out into the Atlantic.

A tree in a Largo neighborhood didn’t survive Tropical Storm Eta’s high winds as it passed through the Pinellas County overnight.

At 10 a.m., Eta was 10 miles southwest of Jacksonville and moving north-northeast at 15 mph. Maximum sustained winds were 45 mph. The center of the storm was moving over northeastern Florida. Eta is expected to move parallel to and offshore the Carolinas tonight and early Friday before heading east out into the Atlantic.

National Hurricane Center has canceled all watches and warnings for Tropical Storm Eta in effect for Pinellas County; however, higher than normal tides are possible this afternoon.

A coastal flood advisory in in effect until 3 p.m. and a high rip current risk is in effect through Friday morning.

National Weather Service says water levels running from 1-3 feet above normal tides are likely this afternoon and minor saltwater flooding is possible in low-lying areas. Coastal flooding is likely around the times of high tide.

At 10 a.m., Eta was 10 miles southwest of Jacksonville and moving north-northeast at 15 mph. Maximum sustained winds were 45 mph. The center of the storm was moving over northeastern Florida.

Eta is expected to move parallel to and offshore the Carolinas tonight and early Friday before heading east out into the Atlantic.

Flooding was the biggest problem as Eta moved through the area overnight. Roadways may still be flooded today and motorists are advised to use caution and avoid traveling on them until the water had gone down.

Pinellas County Sheriff’s Office responded to calls for help throughout the night and ultimately rescued 33 people from homes and roadways. Boats and high water vehicles were used to assist with rescues in areas inaccessible to vehicles.

Most of the rescues occurred in the area from Pass-a-Grille in south St. Pete Beach north to Madeira Beach. Rescued people were taken to area hotels or other shelters. No injuries were reported.

Deputies have been working overnight to make sure the roadways are safe. They used chainsaws and other hurricane response equipment to remove fallen trees and branches from the roads. Deputies also are working with County Highway crews to further clear the roads.

At this time there are no road closures but teams of deputies are currently doing assessments throughout the county and we will provide updates as they are available. The Sunshine Skyway Bridge has reopened.

Pinellas County says most of the reports of damage coming in are for traffic signals, downed trees and flooding. Residents can document damage of their property at https://arcg.is/1T4i9j.

The county’s Emergency Operations Center was activated and the information center is open so residents can call in for any storm-related questions. Call 727-464-4333 until 5 p.m. today and from 9 a.m.-2 p.m. on Friday. The deaf or those hard of hearing can chat online at bit.ly/PinellasChat.

County offices remain closed today as do Pinellas County Schools. They will reopen on Friday.

All Pinellas County parks will also reopen for normal operating hours on Friday.

The drive-through testing site at Tropicana Field, which normally operates Tuesday through Saturday from 8 a.m. to 3 p.m., will resume those hours Friday and Saturday.

The Ruth Eckerd Hall site will resume normal operations on Friday as well from 7 to 10 a.m. Testing runs on Mondays, Wednesdays and Fridays from 7 a.m. to 10 a.m.

What to do with storm debris

Residents are advised to place storm debris, such as tree branches and leaves, in with their household garbage or yard trash collection service. Residents should follow the guidelines of their garbage collection provider. For example, if residents normally place yard trash in with garbage collection or set it out for separate collection, they should continue to do so.

For questions about storm debris, residents should contact their private or municipal garbage collection provider. For a list of contacts, visit www.pinellascounty.org/solidwaste/garbage-collection.htm.

Based on the initial assessment of debris created by Tropical Storm Eta, the County does not plan to activate a special collection for storm debris at this time.

The 29th named storm of the season formed early Tuesday morning. National Oceanic and Atmospheric Administration’s Climate prediction experts forecast early on that the 2020 Atlantic hurricane season would be a busy one.

Eta was the 28th named storm of a season that has already had 12 hurricanes and five major hurricanes.

An average hurricane season includes 12 named storms with six strengthening into a hurricane and three becoming a major hurricane.

The 2020 season was tied with 2005 for being the most active, but Theta broke the record. 2020 is the second season to use Greek letters to name storms. The first season was 2005.

Eleven storms have made landfall in the United States this year, which breaks the record of nine set in 1916.

NOAA predicted that this year could have between 19-25 named storms, seven-11 hurricanes and three-six major hurricanes, which are a Category 3 or above.