From left, Anthony Thomas Koedel, Lady Nicole Nash, Javonta McCloud and Edwin Marquis Bryant were all charged with inciting a riot during a protest in St. Petersburg. 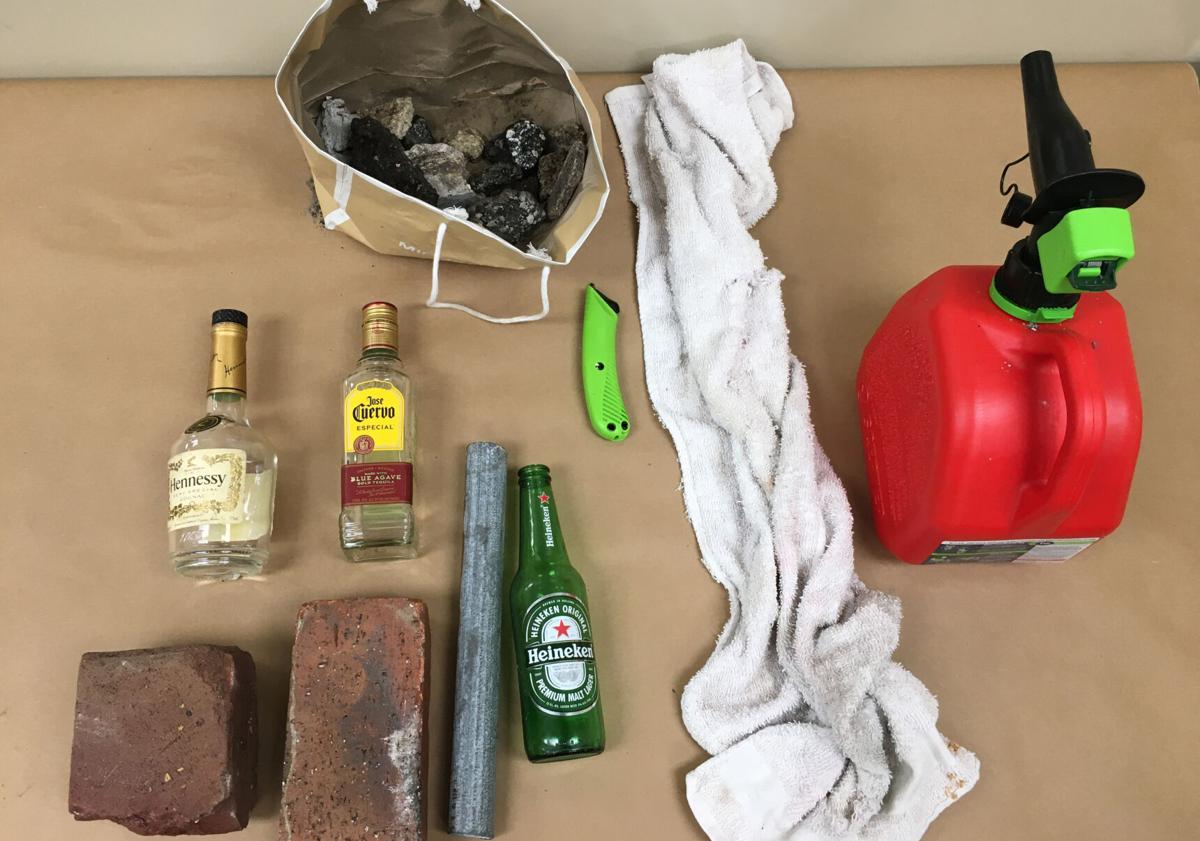 St. Petersburg police found a gas canister, glass bottles, bricks, a bag of large rocks and a metal pipe inside the SUV located in the 1200 block of Central Avenue. Three people were arrested for inciting a riot in connection with those items.

From left, Anthony Thomas Koedel, Lady Nicole Nash, Javonta McCloud and Edwin Marquis Bryant were all charged with inciting a riot during a protest in St. Petersburg.

St. Petersburg police found a gas canister, glass bottles, bricks, a bag of large rocks and a metal pipe inside the SUV located in the 1200 block of Central Avenue. Three people were arrested for inciting a riot in connection with those items.

ST. PETERSBURG — The city of St. Petersburg has been the setting for ongoing protests in Pinellas County as people react to the death of George Floyd, an African-American man who died May 25 at the hands of police in Minneapolis, Minnesota.

St. Petersburg police report that for the most part, things have been peaceful.

The protests began the afternoon of Saturday, May 30, when about 300 people gathered outside the St. Petersburg Police Department, 1301 First Ave. N. Police reported that a large group filled First Avenue North, and officers had responded to keep traffic from interrupting them.

Police say as the crowd dispersed later that night, and officers allowed traffic to move down First Avenue North, one protester jumped on the hood of a car. That protester was arrested.

A smaller group had marched through downtown St. Petersburg and on Dr. Martin Luther King Jr St N. for several hours. Police say there were no confrontations or damage during that march. The group then returned to police headquarters where they began chanting. The crowd went home about midnight.

On Monday, June 1, St. Petersburg police reported about 11 hours of peaceful marches and protests had occurred in the downtown area on Sunday.

Police said about 200 protesters had remained outside police headquarters at 11 p.m., at which time someone tore the water meter covers off and threw them at officers. Rocks and bottles followed, police said. Several officers were hit and one had a minor injury. A patrol car window was smashed.

Things weren’t quite as peaceful on Monday, according to a June 2 press release.

Police say after several hours of protesting peacefully in downtown St. Petersburg, a group of about 150 demonstrators gathered on and off in front of the police department.

Police then received information that a red SUV connected to the demonstrators had items stockpiled that could be used as projectiles. Shortly before midnight, officers found a gas canister, glass bottles, bricks, a bag of large rocks and a metal pipe inside the SUV located in the 1200 block of Central Avenue.

Three people were arrested about 12:16 a.m. June 2 and charged with inciting a riot. Those arrested included Lady Nicole Nash, 29, of Largo; Javonta McCloud, 28, of Clearwater; and Edwin Marquis Bryant, 28, of St. Petersburg. Bail was set at $5,000. Nash and McCloud were released on surety bond the same day.

Police say when the group returned to the police department at around 1:15 a.m., June 2, protesters drove cars onto First Avenue North, despite barricades to keep it closed to traffic. Due to the earlier threat, and the presence of additional cars on the closed road, Police declared an unlawful assembly and gave the remaining demonstrators a warning to leave the area. Then police discharged smoke bombs and dispersed the group.

Police then arrested Anthony Thomas Koedel, 29, of Tampa at 1:17 a.m. June 2. Officers say he was one of the organizers of the protest. He also was charged with inciting a riot. His bail was set at $10,000. He was released on surety bond the same day.

"We respect and support the right for people to protest peacefully, however we will draw the line when protestors break the law or threaten the safety of the residents of our city," said St. Petersburg Chief of Police Anthony Holloway in a press release.

"We don't tolerate abuses of power, police brutality, or injustice. We also don't tolerate violent protests. Protest peaceably, protest with a purpose, and we will support you," said St. Petersburg Mayor Rick Kriseman.

Pinellas County commissioners discussed the protests during a June 2 meeting. Commissioner Ken Welch said everyone had been affected by watching the video of Floyd’s death. He said he supports peaceful protesting, but not looting.

“That undermines the message,” he said, adding that law enforcement in Pinellas is trained on “conduct that is out of bounds.”

He asked that protesters keep thing peaceful and to know that police officers that don’t conduct themselves the right way will be held accountable.

Commissioners also are worried about the large gatherings and the effect it might have on community spread of COVID-19. Welch urged protesters to wear a face mask.

Dr. Ulyee Choe, director of the Department of Health in Pinellas, echoed that recommendation and also asked that protesters stay hydrated, especially during the heat of the day.

Since the early days of the pandemic, the commission has started its meetings with a moment of silence.

After that moment on June 2, Commission Chair Pat Gerard asked for “peace and healing for our country, but also change.”

“As black elected officials representing the citizens of Pinellas County, we express our collective outrage at the murder of George Floyd in Minneapolis and join the call for justice for Mr. Floyd, and accountability for all officers involved in this heinous act.

“We strongly support peaceful protests. Rioting and looting, however, is dangerous and dilutes the message of justice for Mr. Floyd. This destructive behavior appears to be fomented by a small group of agitators — some from outside our community — and it cannot be allowed to continue.”

The letter goes on to say that local law enforcement leaders had denounced the conduct of the officers involved in Floyd’s death and pledged to ban use of such tactics. It talks about the many issues impacting the community, including the health impacts of COVID-19, auto-theft and “toe-tagging.”

“Lives are being lost and impacted in our community,” the leaders said. “We look forward to continuing our collective work for a safer, more equitable and prosperous community for all.”