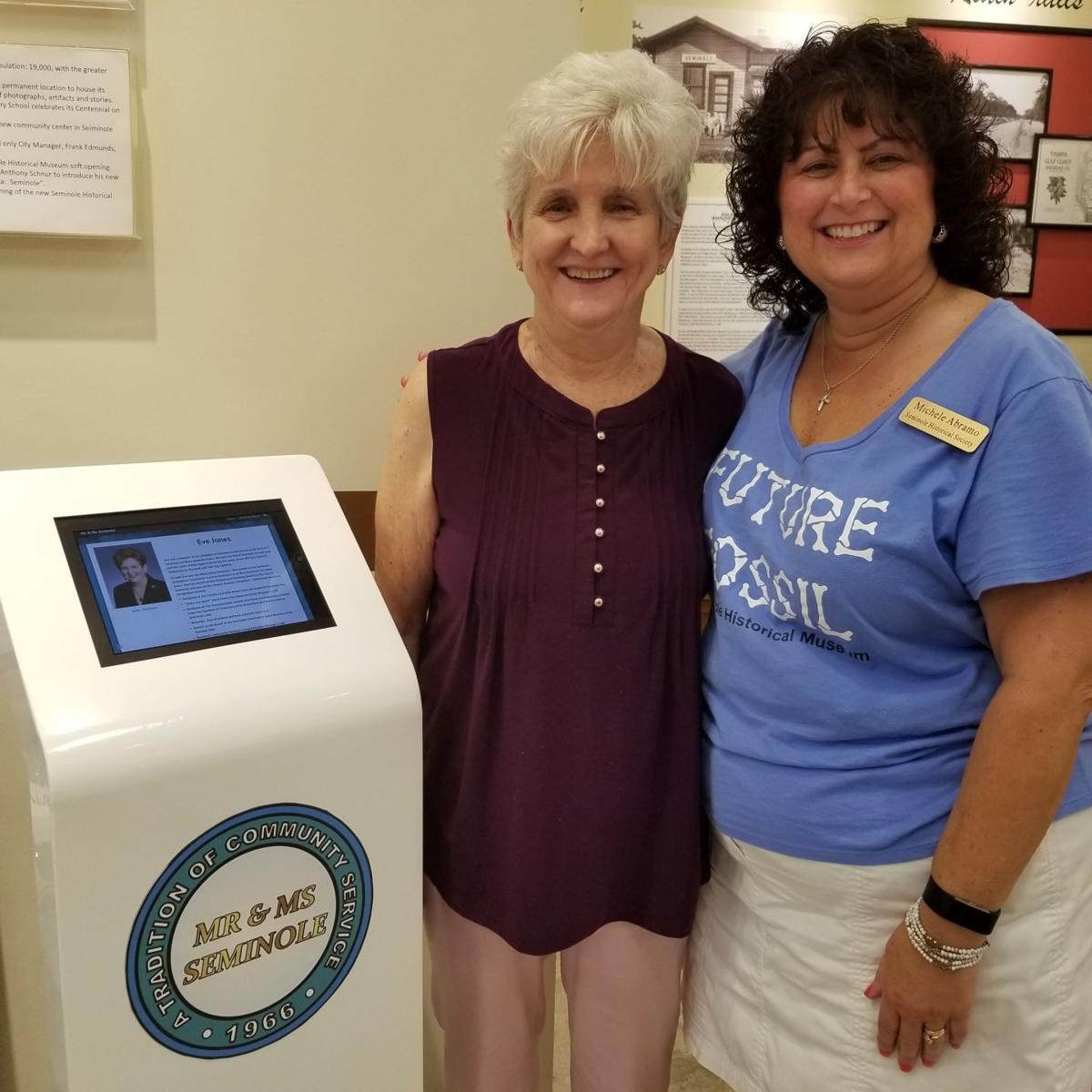 Eva Jones and Michele Abramo, members of the Seminole Historical Society board, show off one of the new digital kiosks at the SHS museum, which is located in Seminole City Park. 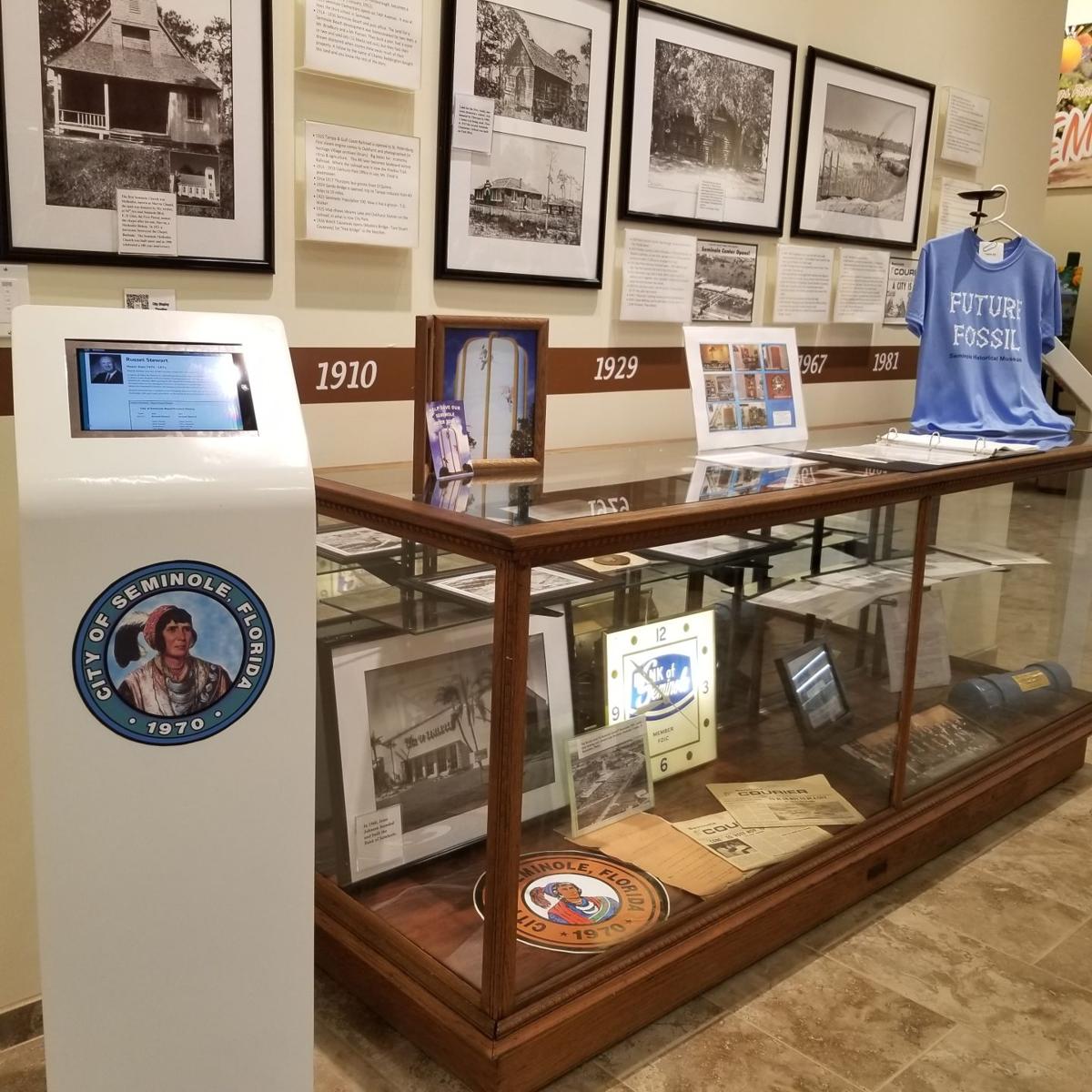 The Seminole Historical Society Museum, located in Seminole City Park, recently unveiled two new digital kiosks. One kiosk is dedicated to information about all past and current Mr. and Ms. Seminole award winners, while the other features general city information.

Eva Jones and Michele Abramo, members of the Seminole Historical Society board, show off one of the new digital kiosks at the SHS museum, which is located in Seminole City Park.

The Seminole Historical Society Museum, located in Seminole City Park, recently unveiled two new digital kiosks. One kiosk is dedicated to information about all past and current Mr. and Ms. Seminole award winners, while the other features general city information.

SEMINOLE — Since opening its doors in 2015, the Seminole Historical Society Museum, located in Seminole City Park at 7464 Ridge Road, has been an ever-evolving space. Every few months, new artifacts, exhibits and displays highlighting the city’s history have been added to its ranks.

Last month, the Seminole Historical Society unveiled the museum’s newest additions — two interactive kiosks that allow visitors to utilize a touchscreen to learn about different aspects of the city.

One kiosk is dedicated to the city’s long list of Mr. and Ms. Seminole winners, an honor awarded by the Greater Seminole Area Chamber of Commerce each year. The second kiosk highlights general city history, including information about past mayors, an historical timeline and more.

Plans for these displays have been discussed for around two years, said Michele Abramo, SHS president, while the work to create the displays began this past spring. The displays were funded by the city of Seminole and the past Mr. and Ms. Seminole winners, she added.

The kiosks came about because the chamber was forced to move into a temporary space while waiting for its new home, a civic building located at the St. Petersburg College Seminole campus that was funded by a grant from the Lurie family, Abramo said.

“She wanted to make sure nothing happened to them until all the (chamber’s) moves were done,” Abramo said. “They wanted to know where they would be, and we were happy to house them.”

While the historical society doesn’t have the space to hang them in the museum, Abramo and the board began planning a way to digitally put them on display. They enlisted board members Jeff and Sue Etter, who own and operate Etter Ventures, to design the kiosks, which utilize an iPad as the touchscreen, Abramo said.

The iPads can be removed from the kiosk, which means they can be brought to different city and chamber functions, including the annual Mr./Ms. Seminole awards banquet, she said. At all other times, they will remain on display in the museum.

“It’s just a cool way for visitors to learn more about the city,” Abramo said.

Other changes at the museum include the addition of Wi-Fi, Abramo said.

“Now guests will be able to come in, sit comfortably and use our Wi-Fi,” she said. “Hopefully, they’re here looking for history, but at least it gets them in here.”

The historical society is also creating interactive components for all of its displays, she said. They’re adding QR codes next to each display. Visitors who have downloaded the app to scan the barcodes will have access to additional information about it, including audio narratives.

The historical society also has several big events coming up. The group will host the kickoff party for the city of Seminole’s year-long 50th anniversary celebration Wednesday, Jan. 22, in the Parkview Room, which is adjacent to the museum.

“Hosting the kickoff is huge for us,” Abramo said.

The SHS is currently collecting memorabilia from around the time of the city’s incorporation, which took place Nov. 15, 1970. They’re asking residents of the greater Seminole area to donate items for this special event.

Abramo said they’re hoping to collect some unique items for the anniversary bash.

The SHS board would also like to identify individuals and businesses in the following categories:

• the first child/resident born in the Seminole community after the city was formed on Nov. 15, 1970

• the first business that opened after the city incorporated

• the oldest business in Seminole that is still operating today

• the oldest living resident of the Seminole community who lived here when the city was formed.

The historical society will also host its third annual fish fry, October-Fish, Friday, Oct. 18, 5 to 7 p.m., at the museum. The classic fish fry dinner, donated by Crabby Bill’s, includes fish, fries, coleslaw and non-alcoholic drinks for $10 per person. Tickets can be purchased at www.seminolehistoricalsociety.org/october-fish.

“It’s such a nice way for the community to come out and see what we have going on,” Abramo said. “It’s just a nice community gathering.”

The museum also continues to host its monthly speaker series. The next guest is Capt. Ray Markham, a native Floridian who has won dozens of fishing tournaments and has helped research, test and develop fishing, hunting and camping equipment. He’ll speak Wednesday, Oct. 23, 7 p.m.

This evening will also serve as the official unveiling of the museum’s fishing exhibit, which features vintage fishing equipment on loan from Jerry and Jan Bachus, who owned the Holy Mackerel shop in Pinellas Park, and a large mounted tarpon caught and donated by Robert LaPierre.