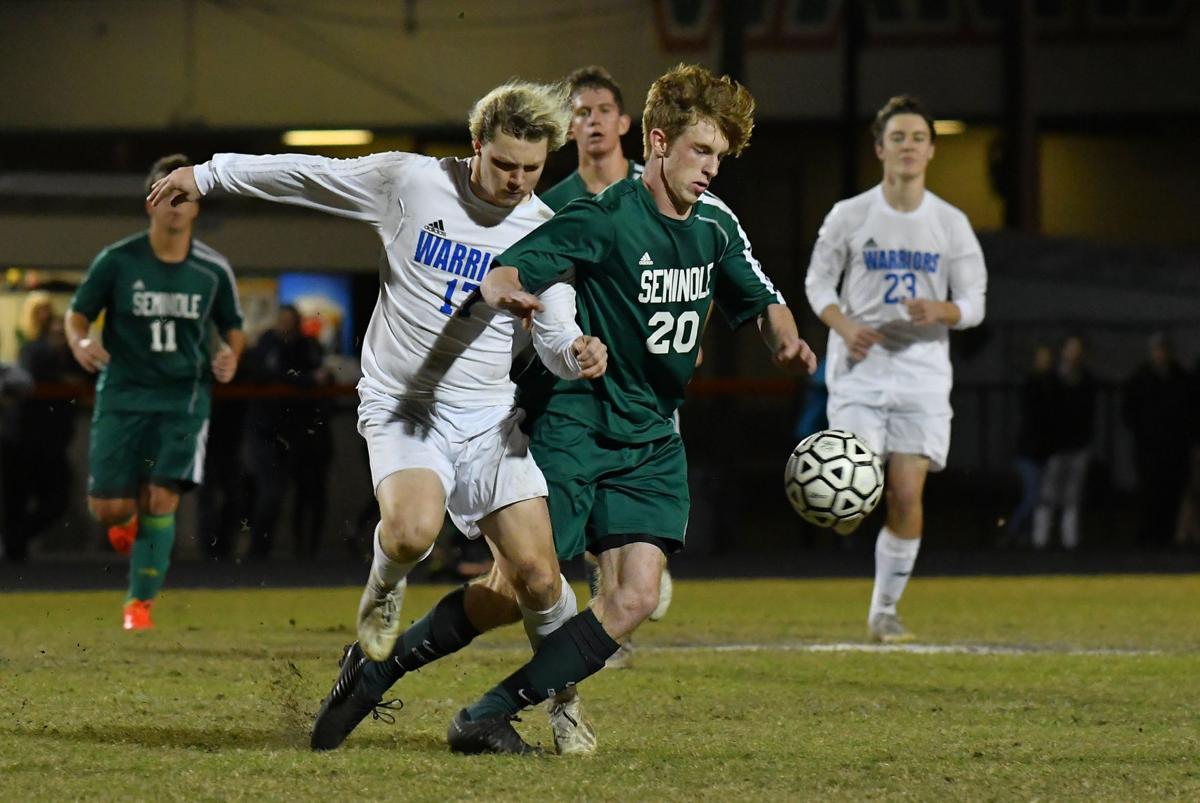 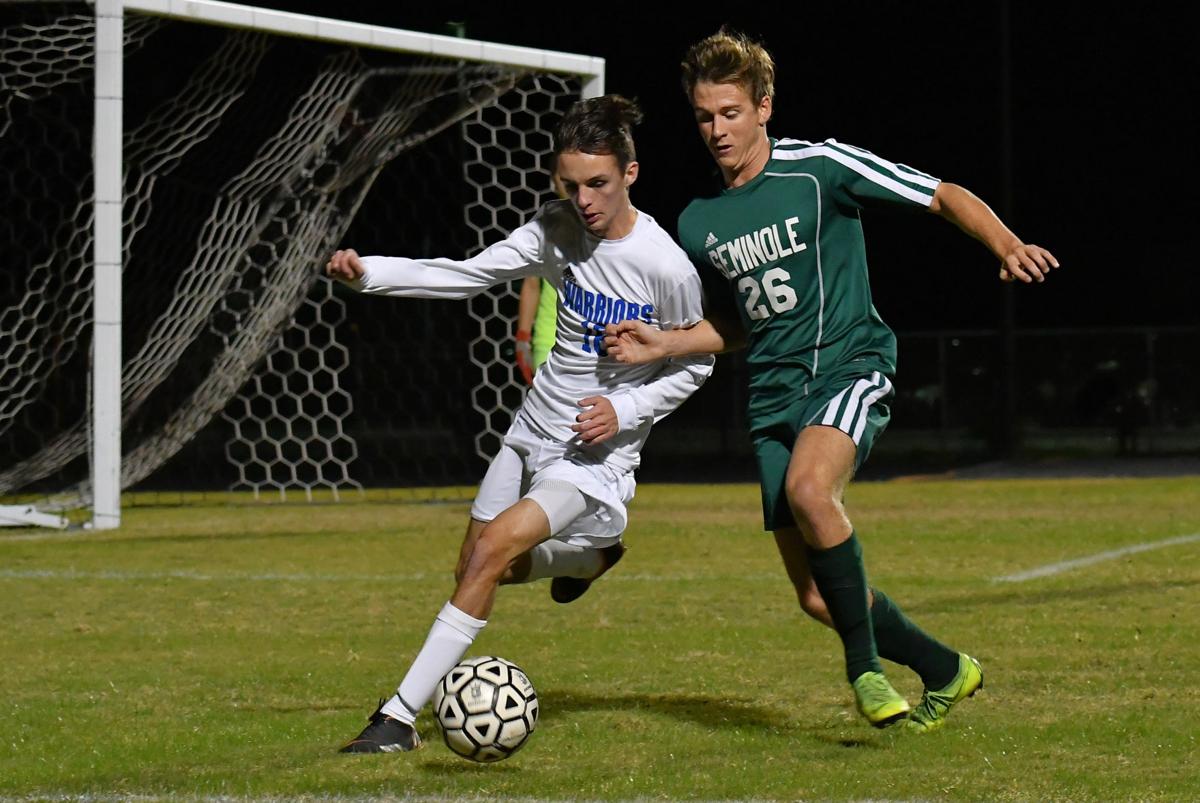 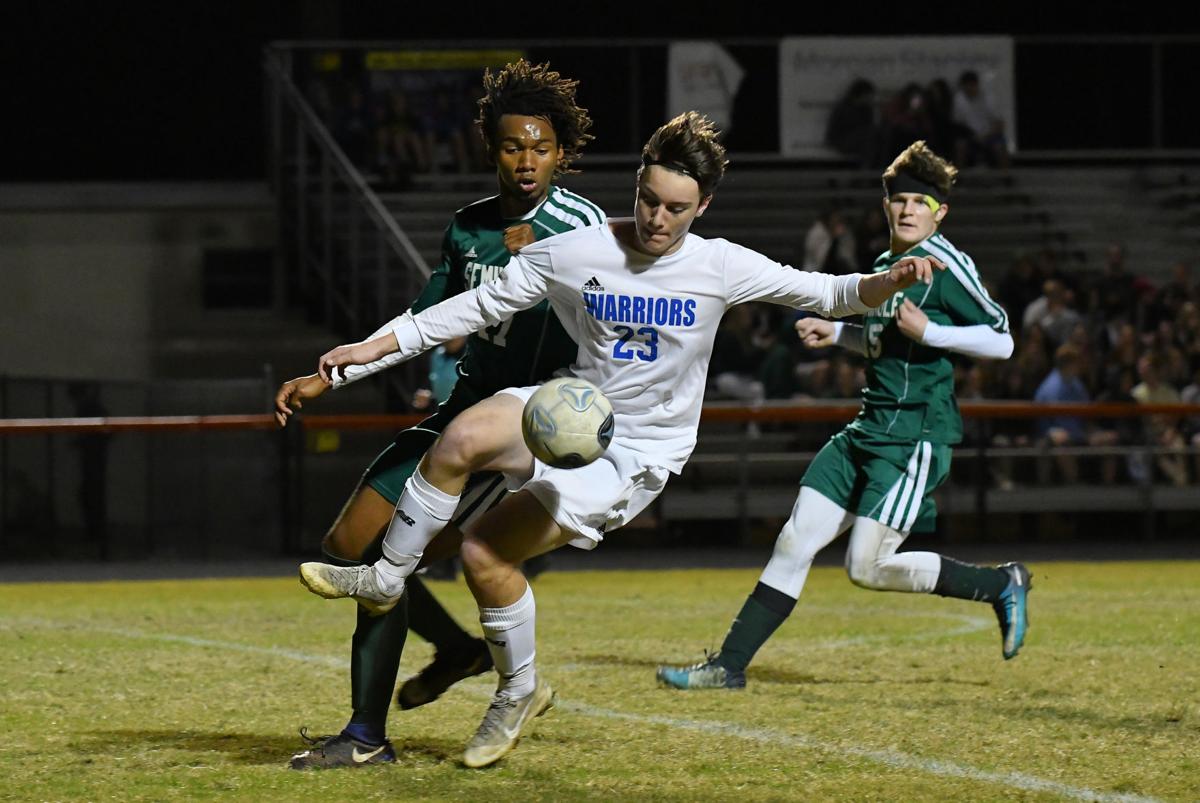 Osceola’s Harley Myers (23) traps and controls the ball despite the best efforts of Seminole’s Kobe Hepburn (17).

Osceola’s Harley Myers (23) traps and controls the ball despite the best efforts of Seminole’s Kobe Hepburn (17).

The teams were tied 1-1 by the end of regulation time. Osceola scored early when sophomore Jayden Walsh took advantage of a defensive mistake by Seminole. Seminole junior Cory McArdle tallied an equalizer later in the game. Following overtime, the Warriors ultimately won in a penalty shootout.

“It was a great game,” said Osceola head coach Ian Matthews. “For us, Seminole is the team to beat. They are a really strong program, probably one of the top soccer programs in the state, if not the country. For us to be able to compete with them was a big deal.”

On game day, Masi said that Seminole was ranked No. 1 in its district and No. 9 in the state.

As for the Jan. 22 game against Osceola, “Ian’s boys played hard,” he said. “When you get down to it, they defended real well and we missed our opportunities. We had time after time after time but we couldn’t score. They had one opportunity to score. I give them a lot of credit.”

Matthews said, “We knew who we were playing and our goal was just to stay with them. And that’s our strength, the strength of our game.”

In a nonconference matchup earlier this season, the teams again tied 1-1 with Osceola getting the edge thanks to penalty kicks, he added.

He took over Osceola’s boys’ soccer program just weeks before the season started. Previously, he worked alongside Masi as Seminole’s assistant coach. In his first year as head coach, he led the Warriors to an undefeated season.

“My goal was always to win the district,” he said. “But the main thing I was looking for was to build a program (at Osceola.)”

The PCAC championship game was “a classic derby match,” when two teams from the same area go head-to-head on the field, Masi said.

“It was a rivalry game and all the boys know each other,” Matthews said. “They play a lot of competitive soccer together and I was Rick’s assistant for several years and he was my mentor as a coach. I’ve carried over a lot of his philosophies.”

The rivalry is all in good fun, Masi added, and he commends Matthews on the Warriors’ success this season.

“He’s got the kids playing with more passion than I’ve ever seen before,” Masi said.

It’s been at least 20 years since Osceola has defeated Seminole, Masi said. The Warriors’ last win over their hometown rivals took place sometime in the late 1990s, he added, possibly in another PCAC championship matchup.

Matthews doesn’t believe it’s been quite so long since Osceola’s last win over Seminole, though.

“I’m not familiar with that history. People keep saying it’s been 20 years, but I have a feeling that might be a bit of an urban myth,” he said. “Let’s just say it’s been a long, long time since we beat Seminole. … So this is a great memory for us, something our players will carry with them for a long time. It was incredible. It was kind of a Super Bowl for us.”

As of press time, both Osceola and Seminole remain in their respective district tournaments. Osceola defeated Bayshore, a team from Bradenton, 8-0, Jan. 24, while Seminole beat Dixie Hollis on Jan. 28.