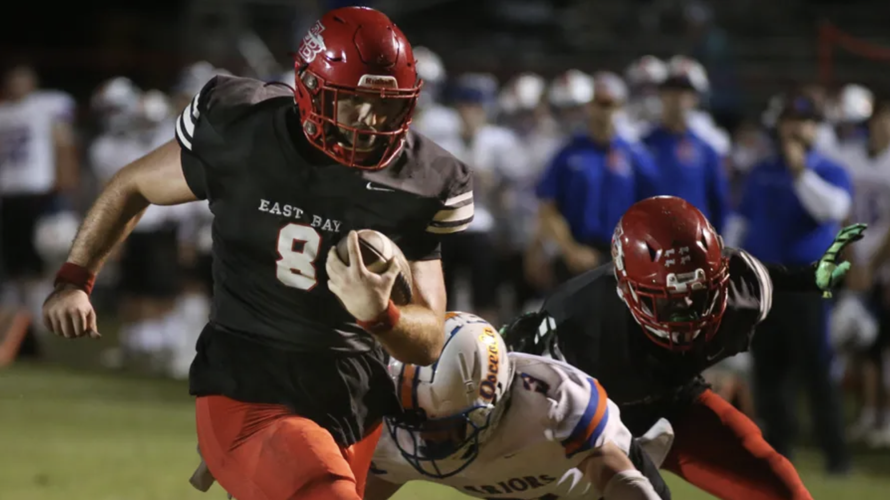 East Bay quarterback Nathan Carter pulls away from the Osceola defense for a touchdown during the Indians' 14-12 victory over Osceola on Friday night. 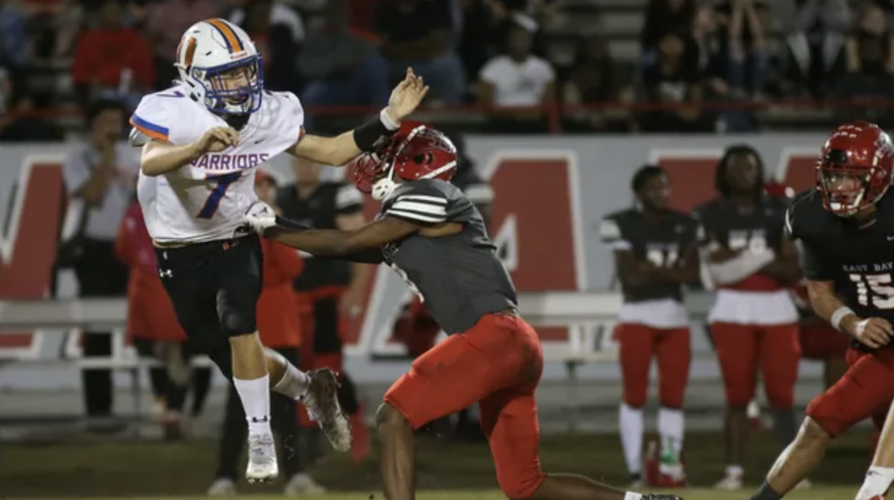 Osceola quarterback Owen Hinote was under pretty stiff pressure all night from the East Bay defense.

“Don’t let a team hang around,” the East Bay coach told his squad at halftime of Friday’s Class 3M, Region 2 quarterfinal against visiting Osceola. “A fluke play … anything can happen.”

A fluke didn’t end the Indians’ title hopes, but a gutsy 13-play, fourth-quarter drive by the Warriors came close. In the end, Kaleb Jones and East Bay’s defense stepped up, stopping a potential tying two-point conversion try with 2:17 left as the Indians held on for a 14-12 victory.

Behind a revived running game spearheaded by junior running back Nathan Carter (99 yards on 24 carries), Osceola (7-4) marched 88 yards in just over six minutes to close within two points.

Senior quarterback Owen Hinote hit Nate Gooden for a 10-yard screen pass on third and 7 and connected with senior Patrick Mizell for 5 yards on fourth and 4 to keep the drive alive. Carter then followed fullback and repurposed lineman Caleb Guerin over the right side, galloping 35 yards for a touchdown.

On the two-point conversion attempt, Hinote rolled to his right but couldn’t find an open receiver. A desperate toss to Gooden near the sideline was picked off by Jones.

“We had planned that call all week,” Osceola coach Cody Montgomery said. “We were going to block down, fake an outside run, and we felt like our tight end was going to pop (free). Instead, (East Bay) did a great job covering it.”

Appropriately, it was Jones, who also swatted down a potential touchdown pass late in the first half, who made the game-saving play.

East Bay had its struggles. A pooch kickoff to open the game was recovered by Osceola. Elmmanual Brooks (nine tackles) blocked the Indians’ first punt attempt. East Bay receivers dropped three sure touchdown passes. A potential interception slithered through the fingers of an Indians defender prior to Carter’s long touchdown run.

“I think we were just uptight for whatever reason,” Gottman said. “We put too much stress on (the game), and I told them at halftime to relax and play. It seemed like we were just fighting emotion (Friday).”

When East Bay needed to move the ball, it turned to Carter, who bulled for 72 yards on 19 carries, 11 of which came in the final 24 minutes.

“That’s how it normally goes. I take the ball and lead us to victory,” said Carter, who scored the winning touchdown with 2:23 left in the first half on an 18-yard run. “I feel like the team has trust in me to win it and that makes me very happy.”

Junior Jaelin Sneed opened the scoring on a 2-yard toss play at the start of the second quarter. A desperation third-down scramble from Hinote midway through the third quarter covered 49 yards and kept Osceola within reach until the final minutes.

“Especially with the adversity we dealt with midseason (losing 10 players to injury), our kids just found a way to keep winning and stay together,” Montgomery said. “I couldn’t be more proud of how they handled their new roles, accepted the challenge and battled their butts off.”

Said Gottman, “We’re glad we survived and advanced to the second round, but we’ve got to figure out our shortcomings and get those fixed real quick.”