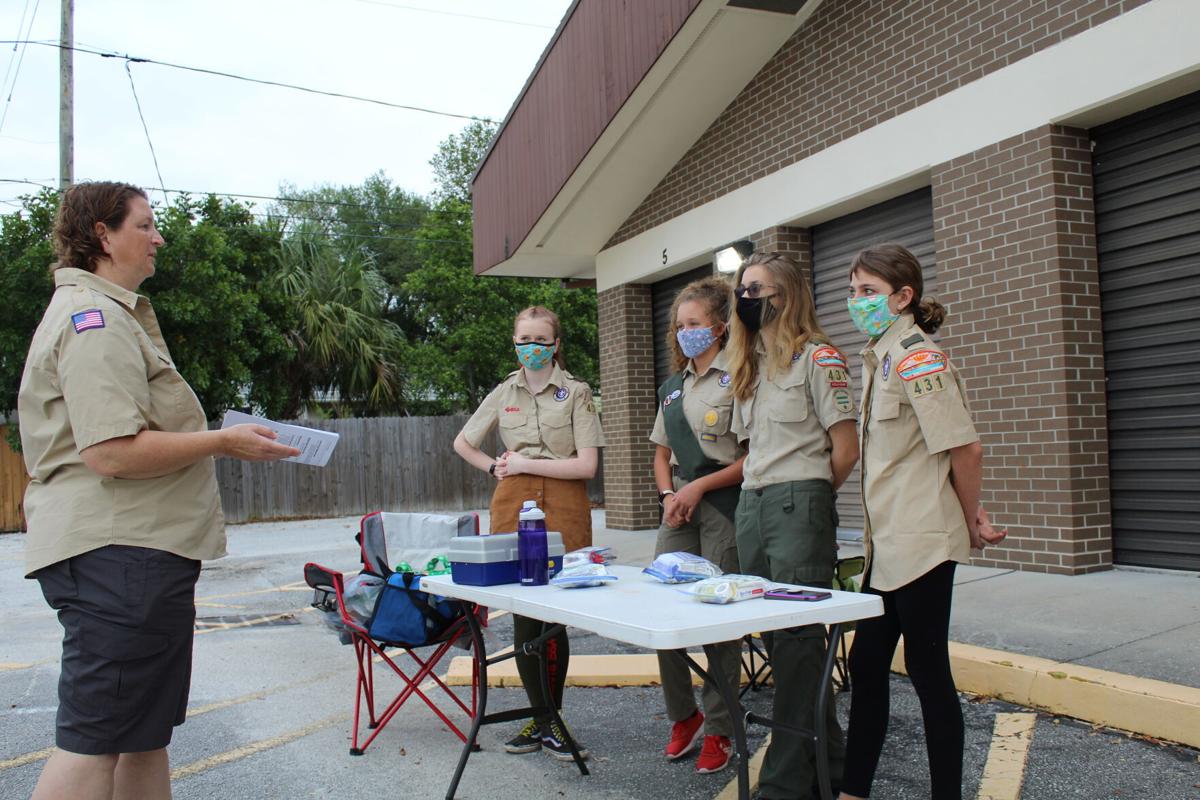 Adult Leader Wendy Skinner provides a lesson on the fine points of first aid to members of the all-girls Boy Scout Troop 431. From left are Sierra Skinner, Veronica White, Sophia Matthews, and Emma Gogolen during their weekly meeting at Blessed Sacrament Church in Seminole. 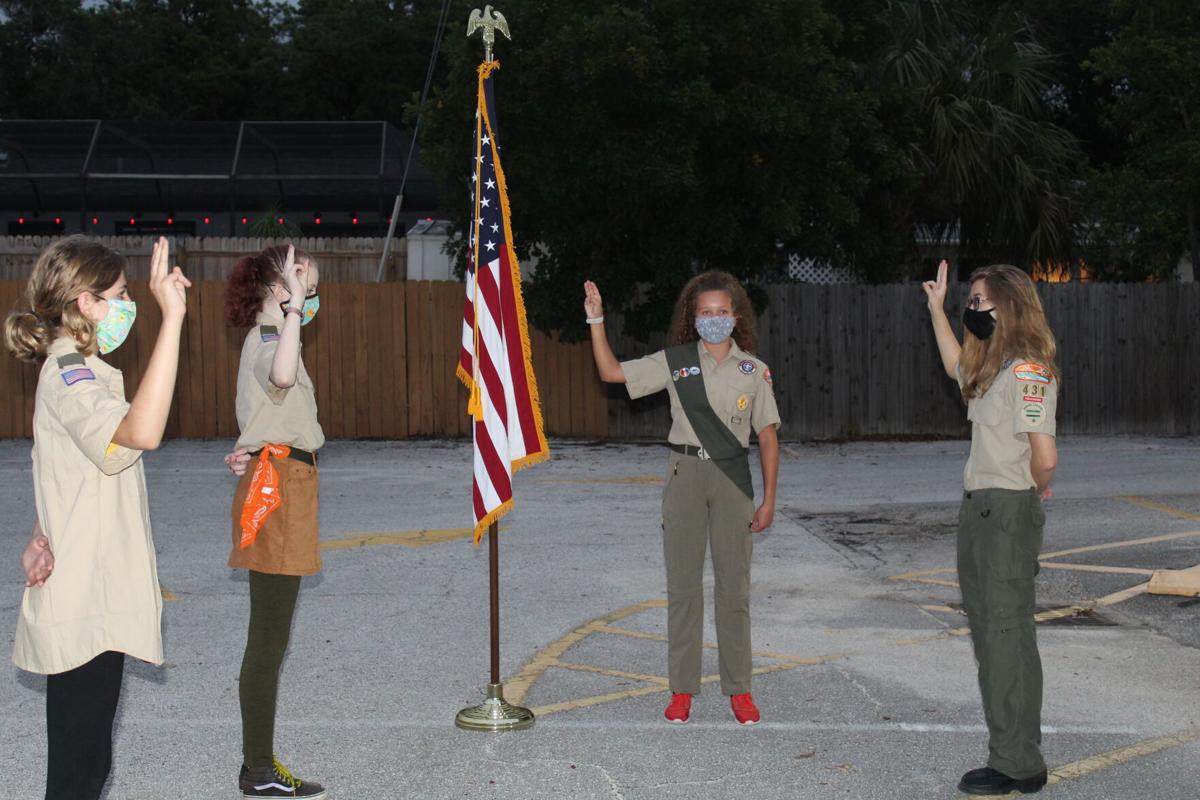 Adult Leader Wendy Skinner provides a lesson on the fine points of first aid to members of the all-girls Boy Scout Troop 431. From left are Sierra Skinner, Veronica White, Sophia Matthews, and Emma Gogolen during their weekly meeting at Blessed Sacrament Church in Seminole.

SEMINOLE — The worst-kept secret in the Boy Scouts may be that girls love outdoor activities — hiking, camping, fishing — just as much as boys do.

Girls got an opportunity to prove that when the Boy Scouts of America opened its doors to girls in 2019. Girls ages 5 to 10 could join the Boy Scout’s Cub Scout program, and girls 11 to 17 could join its Boy Scouts program to work toward becoming an Eagle Scout.

To date, more than 140,000 girls and young women have joined Cub Scouts or BSA nationwide, according to a BSA spokesperson.

The city of Seminole gave young girls a chance to show their outdoor mettle when it launched Girl Scout Troop 431 in early 2020.

The trio gathered together a signed charter agreement, at least five youth and adult applications, fees, committee members, and youth protection certificates that were mailed off to the BSA Council.

“When Blessed Sacrament Catholic Church agreed to sponsor another troop for girls, we began the process of setting up the troop,” said Rachel Keeser, committee chair for Scout Troop 431.

The two scout troops are essentially the same — except for gender, Keeser said.

“They cover the same material for rank advancements and merit badges,” Keeser said. “The girl troop does require at least one female leader at all activities, too.”

While the boy and girl Scout troops run separately, they can coordinate events and activities together if and when they choose.

That girls would want their own separate scout troop shouldn’t really come as a surprise, Keeser said.

“It may be a surprise to someone who hasn't been exposed to the difference between the Boy Scouts of America program and the Girl Scouts,” Keeser said. “I don't personally have much experience with Girl Scouts, but I can tell you BSA has designed a fun and interesting program for our (girl) youth.

“The girls feel great about having their own Scout troop,” Keeser added. “They are independent from the boys yet learning the same things they do, especially their own brothers.”

Members of Troop 431 have already been introduced to the Boy Scouts through Cub Scouts, or watching their brothers in the program, Keeser said.

“They want to learn the same outdoor, leadership, and life skills,” Keeser said. “They also appreciate the opportunity to earn (the rank of) Eagle Scout and the recognition that comes with it.”

According to Brooke Sutherland, scoutmaster for Troop 431, the new troop may also satisfy the appetite of girls hungry for outdoor adventure.

“They (Girl Scouts) don’t do as much high adventure things as they do in Boy Scouts,” said Sutherland. “I shot my first shotgun at Boy Scouts Summer Camp. We went whitewater rafting. So, a lot of girls want to do stuff like that.”

Besides learning life skills in the wild outdoors, joining an all-girl Scout troop may yield other benefits, Sutherland said.

A defining characteristic of scouting: Family members catch wind of it — and often have their own curiosity piqued — through one of their siblings.

“All the girls in Scout Troop 431 have brothers in the Boy Scout troop, so they’re familiar with the program,” Sutherland said. “We actually have one girl, who is both in girl scouts and boy scouts. You can do both if you want.”

Keeser, who has been involved in scouting since becoming her son’s cub den leader, said siblings would often tag along with their brothers to cub scout meetings.

The launching of Troop 431 has also opened an opportunity for young girls in the area ready to move on from their Brownies troop. Now, they don’t have to travel to north Pinellas, where other female troops in the district are located.

The onset of COVID-19 in early 2020 put a clamp on that schedule, while recruiting for new troop members became a struggle, Keeser said.

“With COVID restrictions, we’re unable to visit schools right now, so we are relying on word-of-mouth,” Keeser said.

The troop met virtually last summer, then started back to in-person meetings in September.

COVID hasn’t put a crimp in the Scout troop’s outdoor activity this year, with the girls camping out at Fort DeSoto in Pinellas County.

“We’ve gone (to Fort DeSoto) with the boy troop,” Sutherland said. “We go separate, but we do plan it together.”