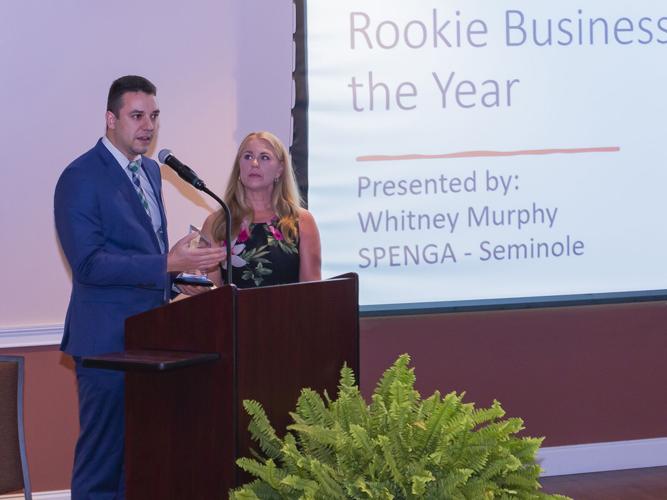 Photo courtesy of the GREATER SEMINOLE AREA CHAMBER OF COMMERCE

The Cambria Hotel was named Rookie Business of the Year during the 57th annual Greater Seminole Area Chamber of Commerce's awards dinner. Nick Heney and Sohnne Sanz, sales director for the Cambria, accepted the award. 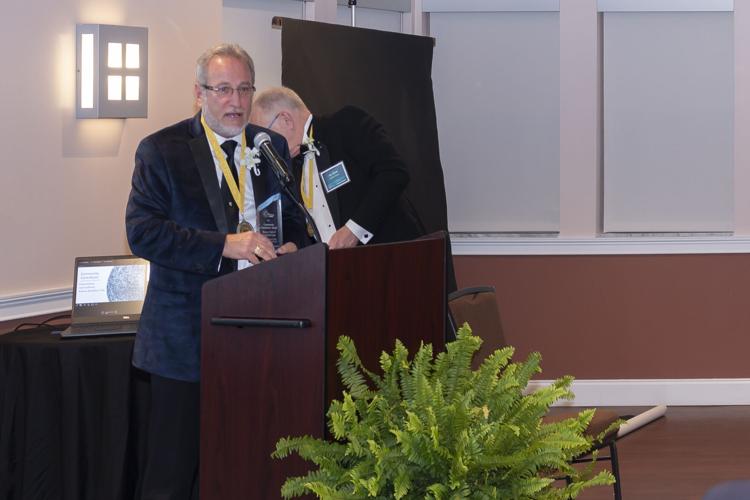 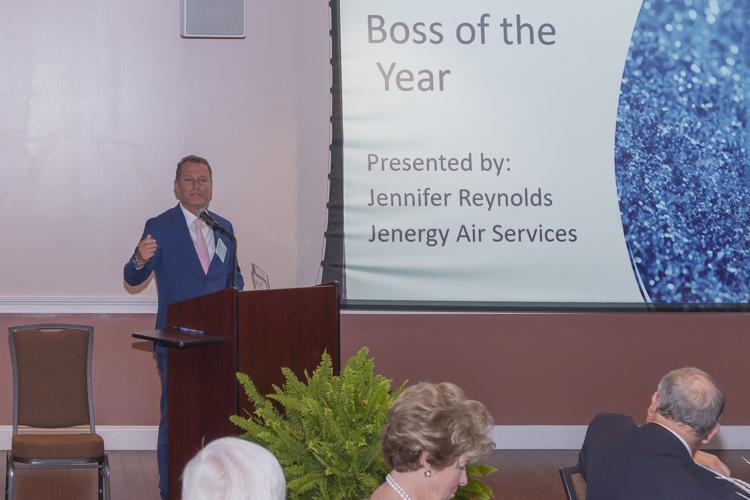 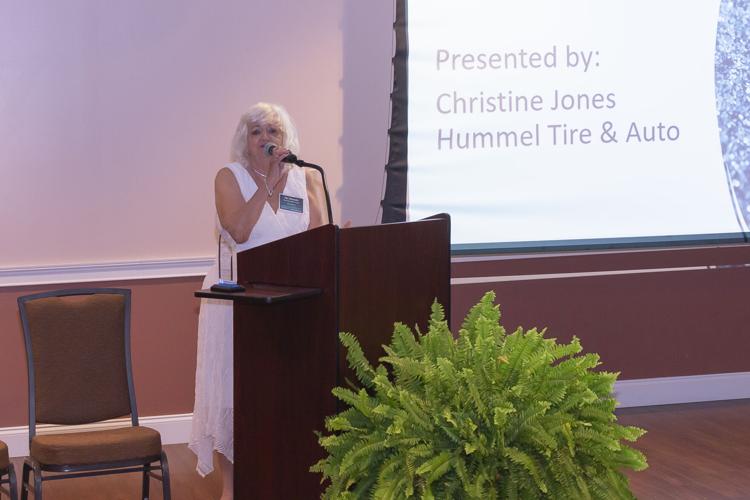 Pat Alexander of Alexander Spine Center accepts the Business of the Year award March 19. The Center offered free chiropractic care to first responders and frontline workers during the pandemic. 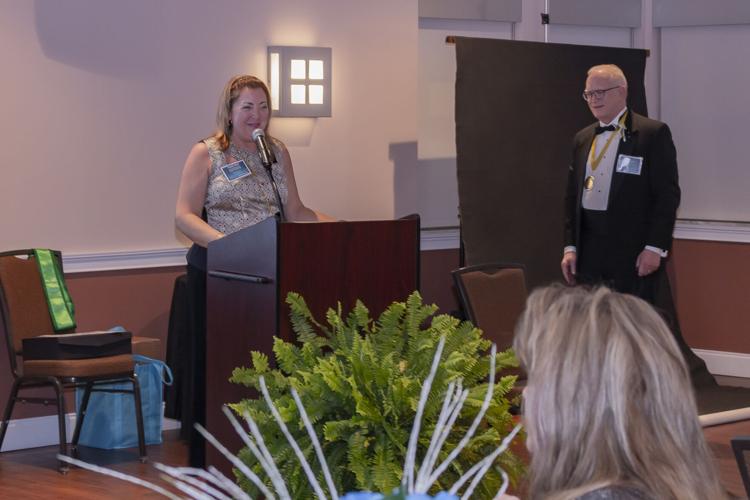 Photo courtesy of the GREATER SEMINOLE AREA CHAMBER OF COMMERCE

The Cambria Hotel was named Rookie Business of the Year during the 57th annual Greater Seminole Area Chamber of Commerce's awards dinner. Nick Heney and Sohnne Sanz, sales director for the Cambria, accepted the award.

Pat Alexander of Alexander Spine Center accepts the Business of the Year award March 19. The Center offered free chiropractic care to first responders and frontline workers during the pandemic.

The first award of the night went to the Cambria Hotel, which was named Rookie Business of the Year.

The award was presented by Whitney Murphy of SPENGA Seminole, the previous year’s winner.

“This year’s recipient quickly became well known in the surrounding area for magnificent views, new structure and luxury feel all right in the heart of Madeira Beach,” Murphy said by way of introduction. “They are a stellar example of what a community-minded business is all about.”

The 125-room Cambria Hotel opened in June 2020, becoming the first of the Madeira Town Center projects to open its doors. The hotel offers a variety of amenities, including contemporary guest rooms; spa-style bathrooms with Bluetooth mirrors; onsite dining featuring local craft beer, wine and cocktails; a fitness center; a meeting space; and a 6,000-square-foot courtyard with fire pits that can also be used for functions.

Accepting the award were Nick Heney and Sohnne Sanz, sales director for the Cambria.

Seminole Lake Rotary Club snagged the second award of the evening after it was named Contributor of the Year.

“This award category was added in tribute to nonprofits and for profits alike who make a big difference in the lives of the greater Seminole Community,” said Linda Burhan, who presented the award. “This year’s recipient has more than 50 members who give tirelessly of their time and talents to make a difference in the community and the lives of those who have challenges and those that are less fortunate.”

“I’d just like to thank everyone so much,” he said. “I have the pleasure of leading a group of people who are outstanding in every sense of the word. They give and give and give, and when we decide to do more, even if we are tired, we continue to do more.”

Jennifer Reynolds, owner of Jenergy Air Services, took to the podium next to present the Boss of the Year award, which went to Josh Sutherland of Lake Seminole Square.

“The boss of the year criteria for the nominee routinely shows consideration and support of staff, colleagues and visitors to the business, as well as exhibits other qualities that exemplify good leadership and organizational abilities, and performs courtesies in the community beyond his or her responsibilities,” Reynolds said.

Sutherland thanked his staff for their hard work during his acceptance speech.

“It’s been a rough couple of years and the group at Lake Seminole Square are responsible for over 400 residents; they all come together and do a beautiful job,” he said.

Alexander Spine Center walked away with the Business of the Year award.

“This year’s winner is a leading business in Seminole since opening its doors in 2008; they are an excellent example of a committed local business,” said presenter Christine Jones. “Their business is committed to giving back to the community and this shows with their decision to offer free chiropractic care to first responders and frontline workers during the pandemic.”

Family is integral to the success of the business, said Pat Alexander, who accepted the award.

“I want everyone to be treated like they are our family, because that’s the way I want to be treated,” she said. “We honestly care about our patients. They become part of our family, they come to our events.”

The Merit Award was established in 1979 by the Chamber and honors individuals or groups who have performed outstanding service in support of the organization.

“When the chamber says to its members you only get out of your membership what you put in, this owner believes in and lives that motto,” chamber chairperson Ali Bean said of Imus. “Her dedication and willingness to promote the Seminole chamber brand has been unwavering through her years of memberships.”

Imus thanked her husband, Scott, for his support over the years.

“He’s still in Jacksonville, keeping the fort down there, and my two youngest daughters moved down here to start our business, so without your support, we couldn’t have done this,” she said.

As the ceremony was approaching the final award of the night — Mr. Seminole — longtime business owner and 2020’s Ms. Seminole Dr. Sandra Lilo spoke to attendees about the importance of the award and what it says about those who are selected.

“Who are the Mr. and Ms. Seminoles?” asked Lilo. “They are ordinary community residents and business owners and workers that give in extraordinary ways — of their time, talent and treasures — to Seminole, not just the years of their retirement, where they have more time, but throughout their lives and their careers.

“They are always looking to serve their families, their communities and their country,” she continued. “It is not so much about what they do, but who they are. They are our unsung heroes.”

In what would be the night’s most bittersweet moment, Lee Walters was named Mr. Seminole 2021. Walters died four days prior to the awards dinner on March 15. He was 83.

As all good things must come to an end, master of ceremonies Ken Burke ended the evening with a reflection on Seminole and its people.

“Seminole doesn’t have this quaint downtown, we don’t have a strong history that other small towns may have of 30,000 people,” Burke said. “But we have special people in Seminole who make this community a wonderful place to live.”

SEMINOLE — The second hour of the 57th annual Greater Seminole Area Chamber of Commerce Awards dinner was coming to a close, with only the top…