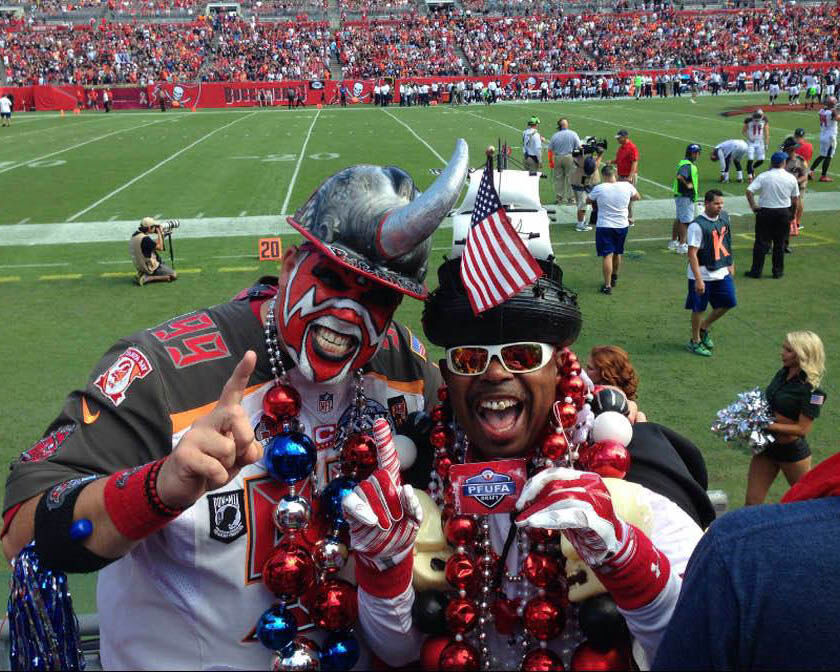 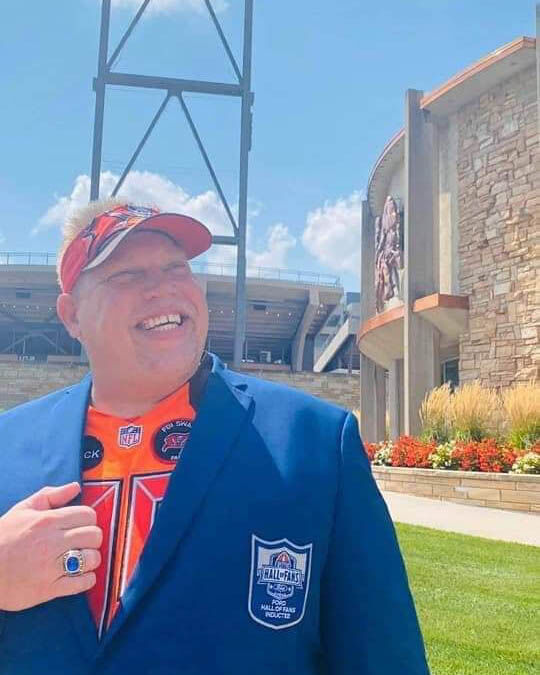 Keith “Big Nasty” Kunzig of Seminole is widely considered to be the Tampa Bay Buccaneers’ biggest fan, and he has been enshrined in the Pro Football Hall of Fame’s Hall of Fans in Canton, Ohio. 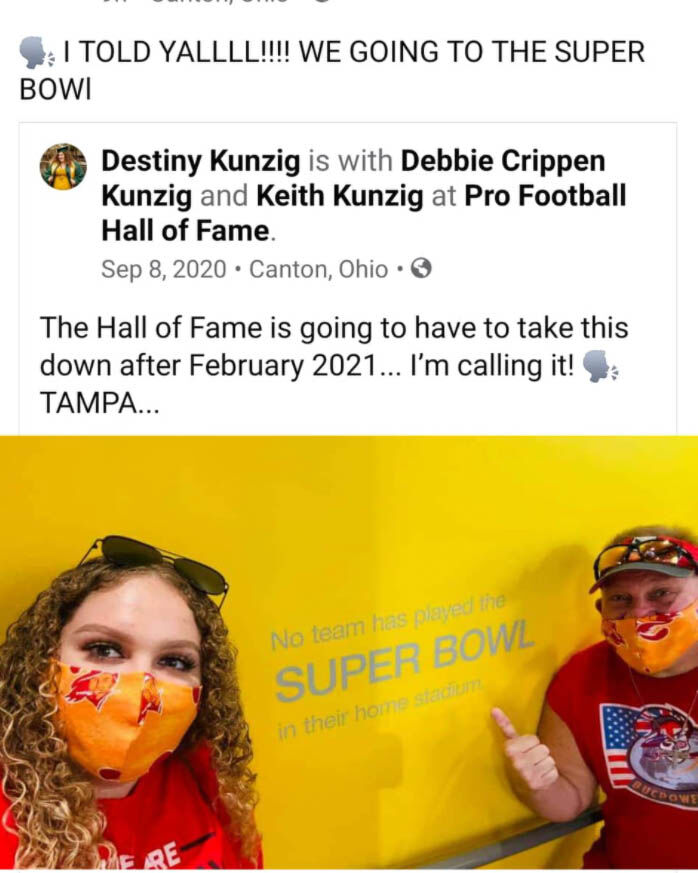 Keith “Big Nasty” Kunzig and his daughter, Destiny, foretold the Bucs’ Super Bowl appearance during a trip to the Pro Football Hall of Fame in September. 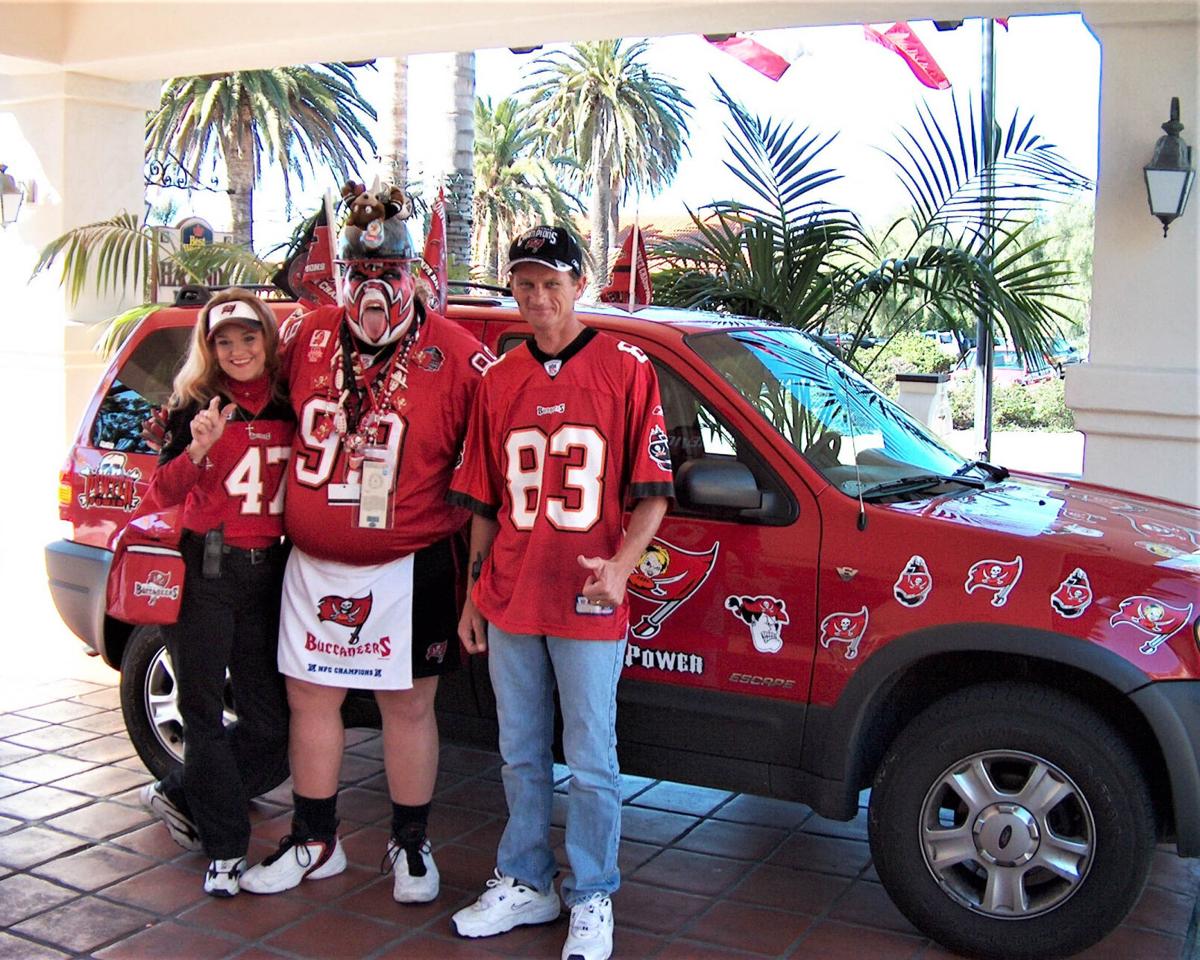 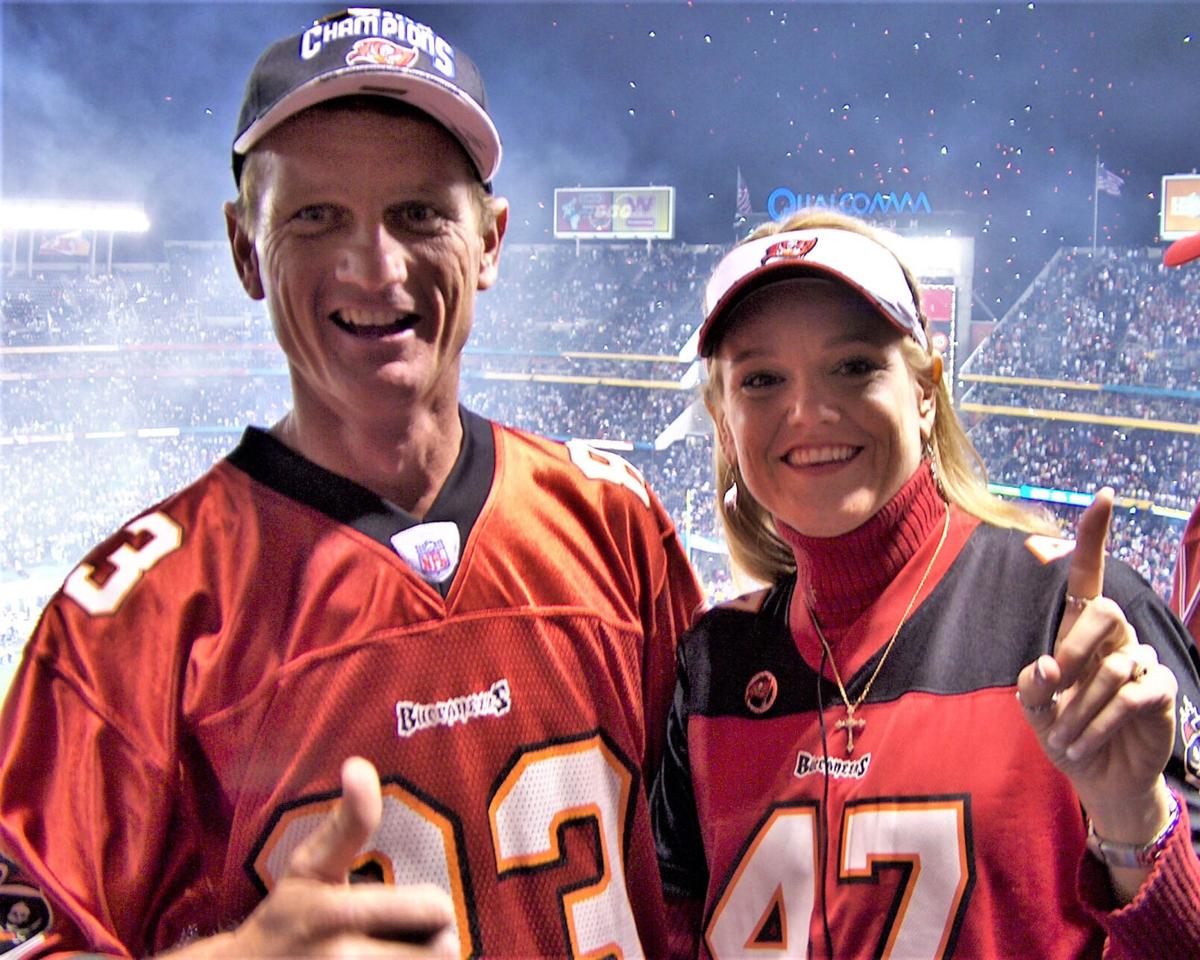 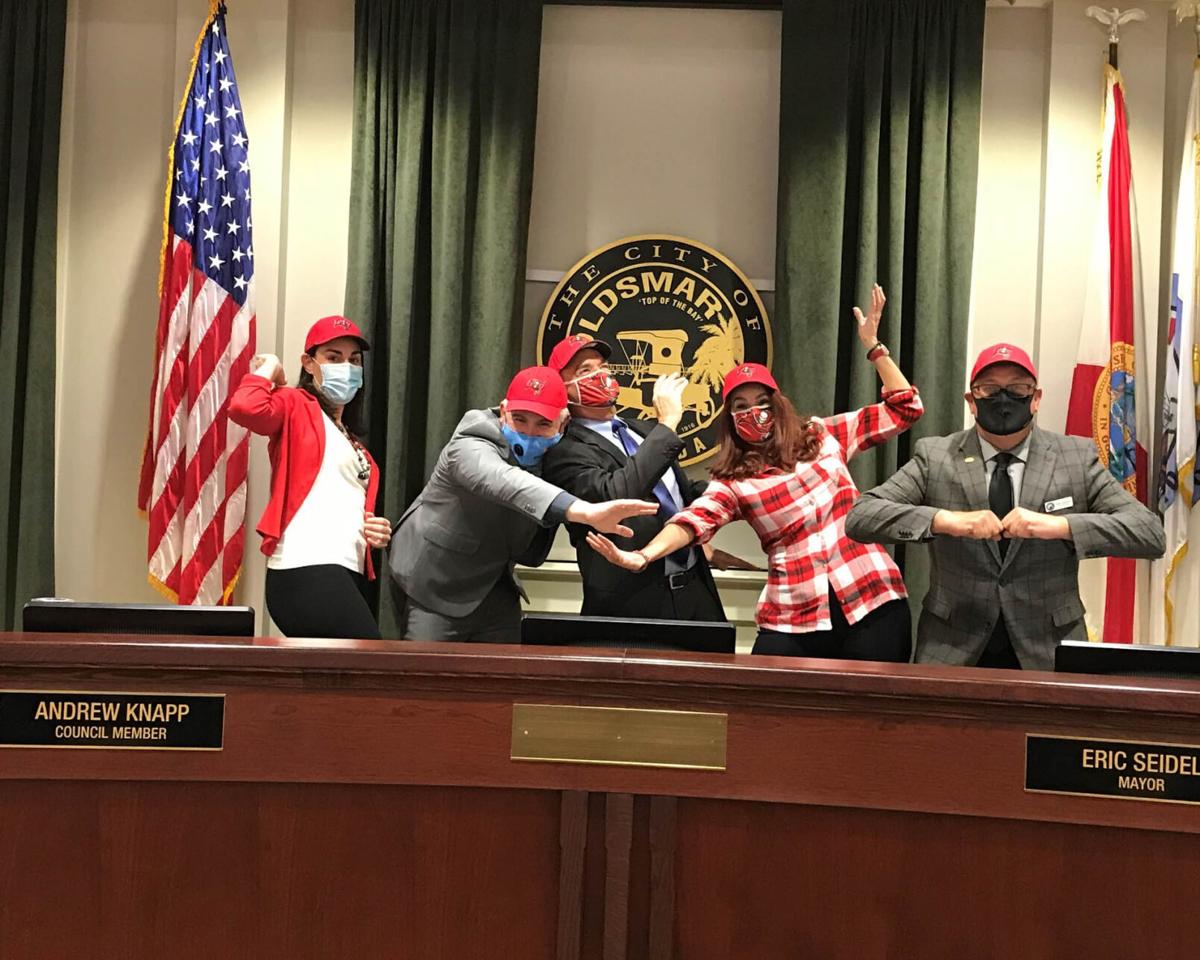 Oldsmar City Council members, from left, Katie Gannon, Andrew Knapp, Mayor Eric Seidel, Linda Norris and Dan Saracki strike a pose in honor of the Bucs making it to the Super Bowl during a meeting in January.

Keith “Big Nasty” Kunzig of Seminole is widely considered to be the Tampa Bay Buccaneers’ biggest fan, and he has been enshrined in the Pro Football Hall of Fame’s Hall of Fans in Canton, Ohio.

Keith “Big Nasty” Kunzig and his daughter, Destiny, foretold the Bucs’ Super Bowl appearance during a trip to the Pro Football Hall of Fame in September.

Oldsmar City Council members, from left, Katie Gannon, Andrew Knapp, Mayor Eric Seidel, Linda Norris and Dan Saracki strike a pose in honor of the Bucs making it to the Super Bowl during a meeting in January.

A lot has transpired in the country and the world since the Bucs beat the Oakland Raiders in Super Bowl XXXVII in San Diego on Jan. 26, 2003, including the team going into a deep funk that until this season produced zero playoff wins and just a couple of postseason appearances. But then Tom Brady came to Tampa Bay last year and changed the team’s fortunes practically overnight.

One thing hasn’t changed since the team’s last title — the attitude of the Bucs’ loyal fan base, a group of diehards that locally includes one of Oldsmar’s longstanding city officials.

“I was jumping up and down and screaming and running all over the house!” City Council member Linda Norris said of her reaction after the Bucs beat the Green Bay Packers in the NFC Championship Game on Jan. 24 to advance to its second Super Bowl. “My family has been a season ticket holder since 1980 and I’ve been attending games since Day 1 in 1976, so I was thrilled to see them make it back after so many rough years for the fans.”

Norris, who’s served three terms on the council and is set to term out of office in March, said she will never forget the experience of traveling to Qualcomm Stadium in San Diego to watch her beloved Bucs beat the Raiders in 2003.

“I was in Qualcomm watching the game with my little brother and it was the best day of my life,” she recalled. “After they won the NFC Championship that year, a bunch of fans went to Raymond James (Stadium) to celebrate and greet the players, and when their plane flew over us the pilot circled and tipped his wings to acknowledge us. It was such a special moment and a great time to be a Bucs fan.”

Norris acknowledged the team has fallen on hard times since then, having missed the postseason every year since 2007 and failing to finish with a .500 record more often than not.

But she said being a fan of the franchise from the start steeled her for hard times, and the down years just make the winning ones like this year even sweeter. She says she’ll be at Raymond James Stadium on Feb. 7.

“I’m not surprised it took us 18 years to get back here because we suffered through 0-26,” she said of the team’s infamous winless streak that started with the birth of the franchise. “But it’s just another surreal aspect of COVID. We get quarterback (Tom) Brady and we’re going to the Super Bowl again. First the Lightning win the Stanley Cup, then the Rays go to the World Series and now this. It’s gives us all something to be happy about to help escape COVID. We have joy. We have some joy.”

Keith Kunzig wasn’t always considered to be the Tampa Bay Buccaneers’ No. 1 fan.

According to the man better known as “Big Nasty,” he was just “a fat kid who loved football” while growing up, going games with his dad at the Old Sombrero in the late 1970s and attending the team’s football camps in the summer, where he came to idolize the Bucs players, their creamsicle uniforms, even the polarizing “Bucco Bruce” helmet logo.

“The reason I’ve been a fan from Day 1 is I met the Lee Roys, I met the Mark Cotneys, I met the Scott Brantleys. Those were my idols growing up,” Kunzig said in a phone interview from his Seminole home one week before Super Bowl Sunday. He noted that Cotney, a hard-hitting safety known as Captain Crunch, took the time to take Kunzig aside and teach him a few key fundamentals during the camp.

“So, when you talk about how you become a fan for life, it’s things like that.”

Kunzig’s bond with the team grew stronger through shared experiences with his brother, Kenny, from the origin of his “Big Nasty” alter ego to their trip to the Bucs’ first Super Bowl victory in San Diego in 2003.

“My brother and I had season tickets and one year after I had a bad breakup with a girlfriend and we said, ‘Let’s paint up for the Green Bay game,’” Kunzig recalled, noting the first time he did it he stained his face for a week thanks to some bad Halloween makeup. “Back then my number was 1, for No. 1 fan, and my brother’s was 99 and the reason was when you put us together, we were 100% nasty!”

Kunzig said celebrating the Bucs’ Super Bowl victory with Kenny at Qualcomm Stadium was an emotional experience, as it came after a year of personal turmoil as well as decades of futility from his favorite NFL franchise.

“I was literally praying for us to win, and when we did, I was bawling like a baby,” he said, noting his emotions were running high because his mother had passed away the previous year. “I don’t know if it was because we won everything or what we went through. But it was a moment I’ll never forget.”

Today, “Big Nasty” is an internationally renowned superfan, a member of the Hall of Fans at the Pro Football Hall of Fame whose face is instantly recognized and gets mentioned by players like Rob Gronkowski on Twitter.

And, once again, Kunzig’s favorite team is back in the Super Bowl after another trying time in his life.

“This last year, the stuff that’s gone on is beyond divine intervention,” he said, citing the death of his brother on New Year’s Day 2020, the coronavirus crisis and the arrival of Tom Brady. “And I’ll tell you right now, the Bucs are winning this Super Bowl. Definitely. With all that’s been going on I’m so confident we’re going to win this thing now because it just can’t end in a bad way. It just can’t.”

Asked why he was so confident in his team’s chances going up against the defending Super Bowl champs the Kansas City Chiefs, Kunzig said, “I didn’t get to take my daughter to the first one because she was an infant, so I took my brother. Now I can’t take my brother, but I’m taking my daughter. And I know the Buccaneers will win this Super Bowl because it’s their destiny, because that’s what my daughter’s name is. Destiny.”