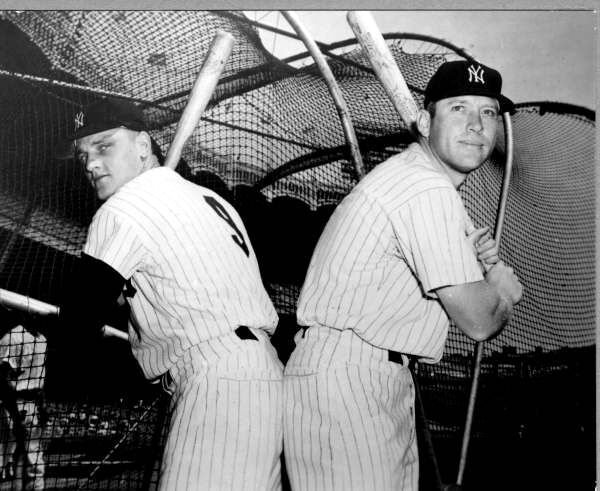 When the New York Yankees arrived in St. Petersburg in 1961 for what would be the team's last year of spring training in the city, there were the usual expectations that they'd be heading into another pennant race that season.

With the likes of Mickey Mantle, Roger Maris, Whitey Ford, Yogi Berra and Tony Kubek dotting the roster, there was no reason to think otherwise.

The Yankees, who fell short in seven games the year before to the Pittsburgh Pirates, would win the pennant in 1961 — and the World Series. However, the season took on another life of its own when Mantle and Maris smashed homer after homer in what became a race to see who could break Babe Ruth's single-season mark of 60.

"Mickey had a big start to the season," remembered Kubek, the starting shortstop for New York. "Roger got off to a slow start."

Soon enough though, Maris, the reigning Most Valuable Player from 1960 when he hit a career-high 39 homers, caught fire.

An injury eventually sidelined Mantle, leaving Maris to try and do the record-breaking deed down the stretch.

"I saw it happening every day," said Kubek, who later became a broadcasting staple on NBC's Game of the Week. Once they both got going, Kubek added, "Roger set the pace. But as a club we weren't really rooting for one or the other. We were just concerned with winning."

Until he came to the Yankees the year before in trade with Kansas City, Maris was known as more of an all-around player, not really a home run hitter. But after joining the Yankees, the lefty-hitting Maris concentrated more on homers with the short porch in right field at Yankee Stadium.

"He was there to hit homers," said Kubek. "He learned to pull the ball. His homers were line drives."

Hector Lopez was a teammate of Maris’, first with the Athletics, then with the Yankees. "Before that year I knew Maris as a defensive player — all of a sudden he started hitting them out," said Lopez.

Heading into the final series of the year against the Boston Red Sox, Maris, by now under enormous pressure — pro and con — was stuck at 60. It came down to the last game of the season, on Sunday, Oct. 1, now nearly 60 years ago.

That day the Yankees had already clinched the American League pennant and it was their last regular-season game before they would go on to beat the National League champs, the Cincinnati Reds, in five games in the World Series.

While there may have been some people that year hoping that Maris would not break the record (many felt that Mantle, if any Yankee, should be the one to do it), there was no doubt that the 23,000-plus fans in attendance were pulling for him. So were his teammates.

When Maris got up the first time, fans booed whenever Boston starter Tracy Stallard threw a ball. Maris eventually got a piece of a pitch that first at-bat and flied out deep to left.

In the bottom of the fourth, with one out and no one on base, Maris got his second chance at Stallard. And he didn't disappoint. Maris smashed a shot into the lower stands in right field. Home Run No. 61!

Ralph Terry, who had won his 16th game on the mound the day before and had a view from the dugout, remembered that it was "a fastball, waist high. I knew it was gone right away."

Maris circled the bases and headed right back into the dugout. The fans wouldn't let up. The reserved Maris had to be cajoled to step back onto the field and acknowledge the screaming fans.

"He never wanted to be the center of attention," said Kubek.

Added Lopez, "I pushed him out of the dugout. He didn't want to go back out."

Maris had a couple of more chances that day to add another one to the record books, but he struck out in the sixth and popped out in the eighth. His blast would turn out to be the only run of the game for the Yankees, 1-0 winners, and the last of 240 homers for the team that season.

Kubek feels that Maris might have broken the record sooner and added a few more except for a couple of factors. He points out that because the Yankees had an incredible home record (65-15) Maris may have lost out on a few extra at-bats if there had been a bottom of the ninth. The Yanks also had a lot of day games after night games that year, like every other team, so the players, most of whom played every day, sometimes dragged the next day. "And when it came to night games," he added, "the lights were not as good as they are today."

On the other hand, one of the first things first-year manager Ralph Houk asked of Mantle in spring training was to move from third in the lineup to fourth, thus letting Maris bat third, which Kubek noted, "gave Roger protection" and better pitches to hit.

"Roger pulled through (all the pressure)," said Kubek, the No. 2 hitter in the Yankee lineup. "It was a great and enjoyable season, and I had a bird's-eye view batting ahead of Roger."

Maris never came close to his 61-homer season again. The next year he socked 33. Maris, who played for the St. Louis Cardinals in his last two seasons, 1967-68, finished his career with 275 home runs and a .260 average. While the home run record sticks out to fans, his peers knew better: Maris was as complete a ballplayer as there ever was.

"He was a good all-around player — he could run the bases and he had a great arm," Kubek said.

"He was the best player in baseball for a couple of years," said Terry. "He was an MVP twice and it took years before anybody would break his (HR) record. It's truly an injustice that he's not in the Hall of Fame."